What exactly is Solana and how does it function? 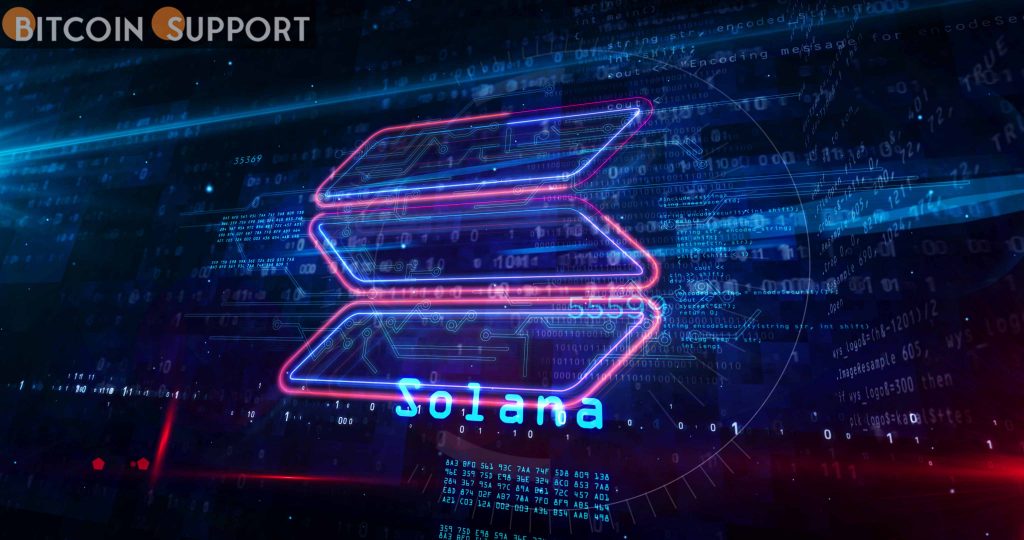 Solana’s ambitious design tries to overcome the blockchain trilemma, however it has a number of flaws, including a vulnerability to centralization.

So, what exactly is Solana?

Solana is a highly functional open source project that develops a new layer-1 blockchain that is permissionless and fast.

Solana was founded in 2017 by Anatoly Yakovenko, a former Qualcomm executive, with the goal of scaling throughput beyond what is currently possible with popular blockchains while keeping prices low. Solana employs a novel hybrid consensus model that combines a one-of-a-kind proof-of-history (PoH) algorithm with a lightning-fast synchronisation engine, which is a variant of proof-of-stake (PoS). As a result, the Solana network may theoretically perform more than 710,000 transactions per second (TPS) without the requirement for scaling solutions.

During the initial coin offering (ICO) frenzy of 2017, the Solana blockchain was launched. In 2018, the project’s internal testnet was released, followed by various testnet phases running up to the main network’s formal launch in 2020.

What distinguishes Solana from the rest of the pack?

Solana’s ambitious design tries to address the blockchain trilemma in a novel way, a concept articulated by Ethereum developer Vitalik Buterin. Decentralization, security, and scalability are the three key issues that developers confront when constructing blockchains, as described in this trilemma.

Because blockchains can only deliver two of the three benefits at any given moment, it is often assumed that developers are forced to compromise one of the qualities in favour of the other two.

The Solana blockchain platform has proposed a hybrid consensus process that prioritises speed above decentralisation. Solana is a one-of-a-kind initiative in the blockchain market due to its novel blend of PoS and PoH.

In general, the more and better a blockchain’s scalability is determined by the number of transactions per second it can accommodate. However, time differences and more throughput slow down decentralised blockchains, implying that additional nodes confirming transactions and timestamps takes longer.

In a word, Solana’s design tackles this problem by selecting a single leader node based on the PoS method for message sequencing between nodes. As a result, the Solana network benefits, decreasing workload and increasing throughput despite the lack of a centralised and precise time source.

Also, by hashing the output of one transaction and using it as the input of the next, Solana establishes a chain of transactions. Solana’s main consensus mechanism is named after this history of transactions: PoH, a principle that enables for better scalability of the protocol, which improves usability.

How does Solana function?

Proof-of-history is the heart of the Solana protocol, a series of computations that produce a digital record confirming that an event occurred on the network at any point in time. It can be presented as a cryptographic clock that assigns a timestamp to every network transaction, as well as a data structure that can be added to it easily.

PoH can also be thought of as a high-frequency Verifiable Delay Function (VDF), a triple function (setup, evaluation, and verification) that generates unique and dependable results. VDF keeps the network in order by confirming that block makers have given the network adequate time to go forward.

Solana employs a 256-bit secure hash algorithm (SHA-256), which consists of a collection of patented cryptographic operations that produce a 256-bit result. The network samples the number and SHA-256 hashes on a regular basis, delivering real-time data based on the set of hashes stored on central processing units.

This sequence of hashes can be used by Solana validators to record a specific piece of data that was created before the generation of a specific hash index. After this particular piece of data is inserted, the timestamp for transactions is created. To accomplish the promised high TPS and block generation times, all nodes on the network must have cryptographic clocks to keep track of events instead than waiting for other validators to authenticate transactions. 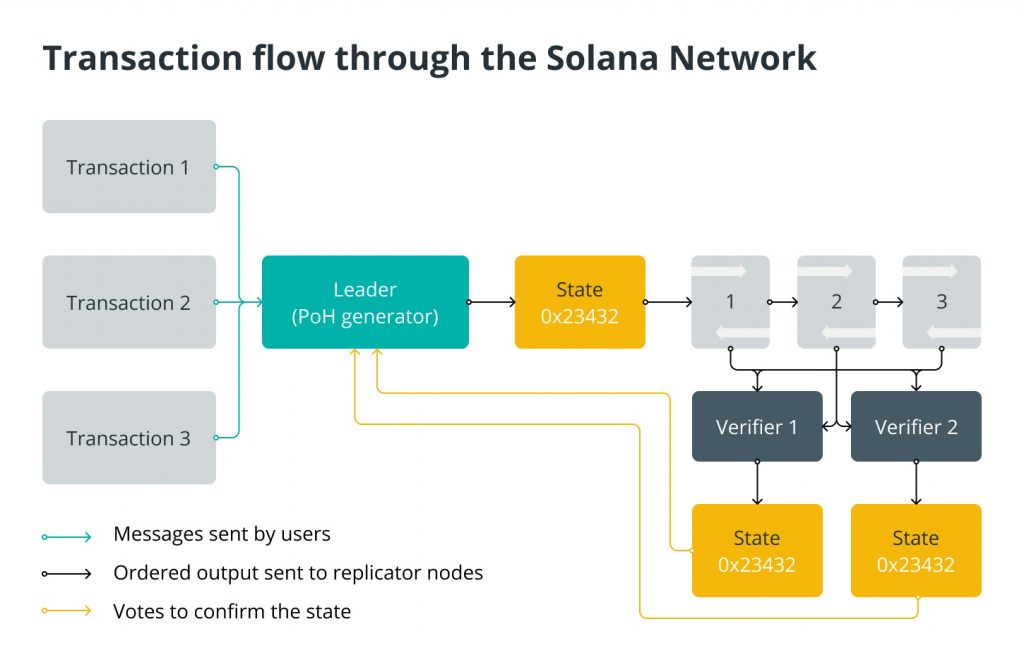 The Solana (SOL) token is a cryptocurrency.

SOL is the cryptocurrency of Solana. It is the native and utility token of Solana, and it serves as a means of transferring value as well as providing blockchain security through staking. SOL was founded in March 2020 with the goal of becoming one of the top ten cryptocurrencies in terms of total market valuation.

The operation strategy for SOL tokens is identical to that of the Ethereum network. Despite the fact that they function similarly, Solana token holders must stake the token in order for transactions to be validated via the PoS consensus process. The Solana token is also used to get prizes and pay transaction costs, as well as allowing users to participate in governance.

To answer the question of how many Solana coins are in circulation, there will be more than 500 million tokens released, with the total supply of Solana currently topping 511 million tokens – Solana’s circulating supply is little over half of that. Solana’s founders and the Solana Foundation own roughly 60% of SOL tokens, with the remaining 38% reserved for the community.

SOL tokens may be purchased on most exchanges if you want to know where to buy Solana. Binance, Coinbase, KuCoin, Huobi, FTX, and others are the leading cryptocurrency exchanges in Solana for trading.

Solana has gotten a lot of praise for its speed and performance, and it’s even been referred to as a legitimate contender to crypto industry heavyweights like Ethereum.

So, how does Solana differ from Ethereum, and can it be considered an Ethereum competitor?

Solana is able to challenge the dominant smart contract platform in terms of processing speed, as it is rumoured to be capable of achieving speeds of over 50,000 TPS. To avoid sluggish transaction confirmation, Solana employs a variety of consensus mechanisms. Solana is one of the quickest blockchains in the business, allowing it to compete with industries other than crypto.

In comparison, the current Ethereum proof-of-work approach, which is not scalable, can only handle 15 TPS. As a result, Solana outperforms Ethereum by thousands of times. Another benefit of the Solana network is its exceptional cost-effectiveness, as the project uses novel tokenomics to reduce costs.

It’s also worth noting that, while using one of the PoS versions, Solana’s blockchain is more environmentally friendly and sustainable. In contrast, Ethereum’s present PoW approach necessitates the usage of massive processing capacity.

The Ethereum upgrade to PoS, on the other hand, is something that everyone in the crypto community is looking forward to. An execution layer (formerly known as Ethereum 1.0) and a consensus layer will make up a new type of Ethereum that is being rigorously developed (previously Ethereum 2.0). It has the potential to dramatically enhance throughput, scalability, transaction fees, and power usage.

If you’re still undecided about whether Solana is a decent investment and whether you should buy it, the decision is yours. Despite its obvious benefits, Solana, like every other crypto project, has flaws.

First and foremost, although being able to compete with high-end blockchain projects, the Solana blockchain is still vulnerable to centralization due to the limited number of blockchain validators. Anyone on the network can become a Solana validator, however doing so is challenging due to the high computational power required.

Furthermore, the protocol still refers to itself as a beta version of the mainnet, implying that there may be faults and errors.

Despite these challenges, Solana remains one of the largest crypto ecosystems and appears to be on the right track for expansion.