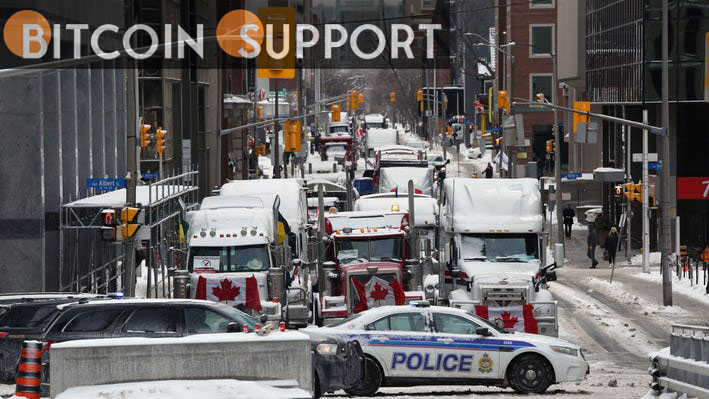 Many of the bank accounts of demonstrators and donors to the Freedom Convoy, who are using Bitcoin to protect themselves from potential intervention, have been unfrozen by the Canadian Prime Minister.

According to CBC news, Canadian Prime Minister Justin Trudeau has declared that emergency powers used to freeze $8 million from 210 bank accounts linked to Canadian ‘Freedom Convoy’ activists will be repealed.

In a televised press conference on Feb. 24, Trudeau claimed that “we’re ready to confirm that the situation is no longer an emergency” and that his exceptional powers given under the Emergencies Act will be terminated. “We are convinced that existing regulations and bylaws are now adequate to keep people safe,” he added.

I have been on the phone with Canadians all day.

This is not a drill.

Bitcoin. Get on the mission.

Since last month, Freedom Convoy protestors have been blocking streets and demonstrating in front of Ontario’s Parliament Hill to eliminate Covid mandates and limitations. The accounts were frozen as a result of the Emergencies Act. The Trudeau government began unfreezing bank accounts on February 23.

“The vast majority of accounts are in the process of being unfrozen,” Isabelle Jacques, assistant deputy minister of finance, told a committee of MPs. “Subject to any new information that the RCMP may have,” she said, referring to the Royal Canadian Mounted Police.

After the Canadian authorities barred protesters from using standard crowdfunding platforms such as GoFundMe and GiveSendGo, they turned to Tallycoin to fundraise with Bitcoin, raising 21 BTC worth around $902,000 by the time the event ended on Feb. 15. The BTC was subsequently transferred to a different wallet with distinct key holders by the event organisers.

Concerning to see stuff like this happening in any country, especially such an economically free place like Canada.

Some big crypto industry figures were incensed by the decision to freeze bank accounts and spoke out against it. “Due process is for plebs,” Kraken CEO Jesse Powell tweeted in response to the bank freezes on February 18. In Canada, might makes right.”

“People should consider whether the government always has their best interests at heart, or whether it would ever go to such lengths as to seize bank accounts without due process.”

Today, after careful consideration, we’re ending the use of the Emergencies Act. Existing laws and local law enforcement authorities can keep people safe, and we’ll continue being there to support provincial and local authorities to protect Canadians.

Senator Rand Paul, a Republican from the United States, expressed concern about government overreach and raised the alarm about the prospect of a similar situation occurring in the United States. On February 20, he appeared on the Based Politics podcast with host Hannah Cox and said:

“We have similar statutes here, and I’ve been an outspoken opponent of them for a long time. We have an Emergency Act in the United States that permits the president to shut down the internet.”