After the debut of the Rocket Joe liquidity launch programme attracted new projects and token listings to the DeFi platform, the JOE price made an impressive comeback.

It looks that the market is regaining its footing, and as the haze clears, it will be simpler to determine which projects have fundamental flaws and which are reverting to their historical trading ranges before the recent three-week slump.

For example, Trader Joe’s DeFi protocol has continued to put out new innovations throughout the market correction. 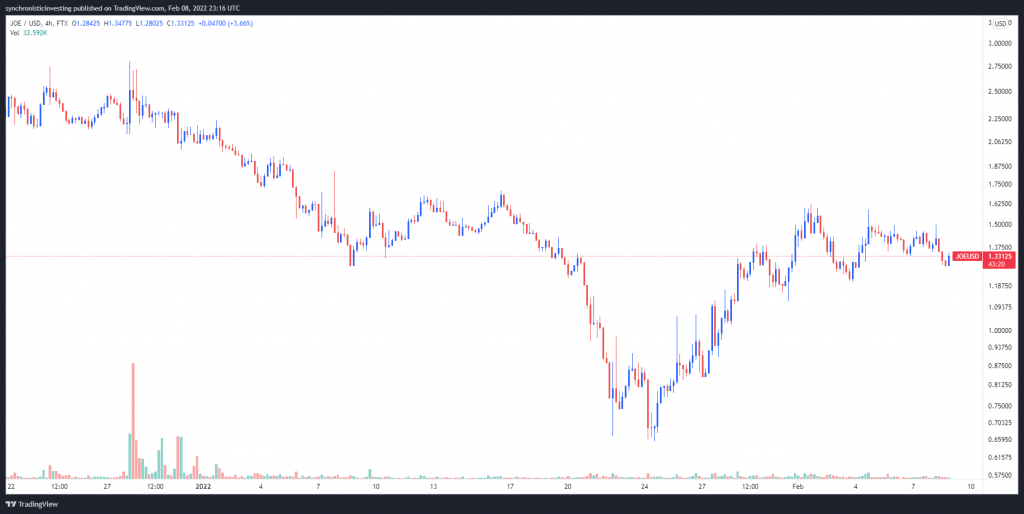 Trader Joe’s new projects and staking pools, the launch of Rocket Joe’s liquidity platform, and a rise in total value locked (TVL) all contributed to the price’s turnaround.

Rocket Joe, a liquidity launch platform meant to facilitate the launch of new tokens on Trader Joe by providing seed liquidity, has been the most significant development to come out of Trader Joe so far in 2022.

Holders of JOE tokens can now bet their tokens on the Rocket Joe platform to gain rJOE, which is a credit for Rocket Joe Launches. When a user deposits 100 rJOE into a Rocket Joe Launch, they’ll get one Avalanche (AVAX) allocation.

Starting pricing and liquidity on Trader Joe’s can be determined by the monies that have been pledged. If you choose to supply liquidity, your funds will be locked in the liquidity pools for seven days after you make your choice. Users earn a share of the newly created coin in return for their assistance in providing liquidity.

Avalanche users may now buy newly issued tokens without having to compete with bots or pay exorbitant gas rates during previous token launches.

As a second component in the value of JOE, numerous new tokens and projects have been added to the platform, including the first project to be launched out of Rocket Joe (HON).

🦸Registration for @HeroesofNFT is now closed and our community showed up massively!

Stay tuned for more content with the team and make sure to claim your guaranteed allocation starting on 1/31. pic.twitter.com/enEugDvOBp

These include Dragon Crypto Gaming and Domi Online, a pair of games that allow players to earn tokens while they play, as well as Cook Finance’s Open DeFi Notification Protocol and Kattana’s cross-chain trading terminal.

TVL’s popularity is on the rise once more.

Defi Llama data shows that the platform’s overall value has begun to recover following the previous multi-month market sell-off due to the recovery in the price of JOE and the addition of new tokens and liquidity pools.