To start off Bitcoin 2022, the mayor unveils a ‘Miami Bull’ statue with laser eyes 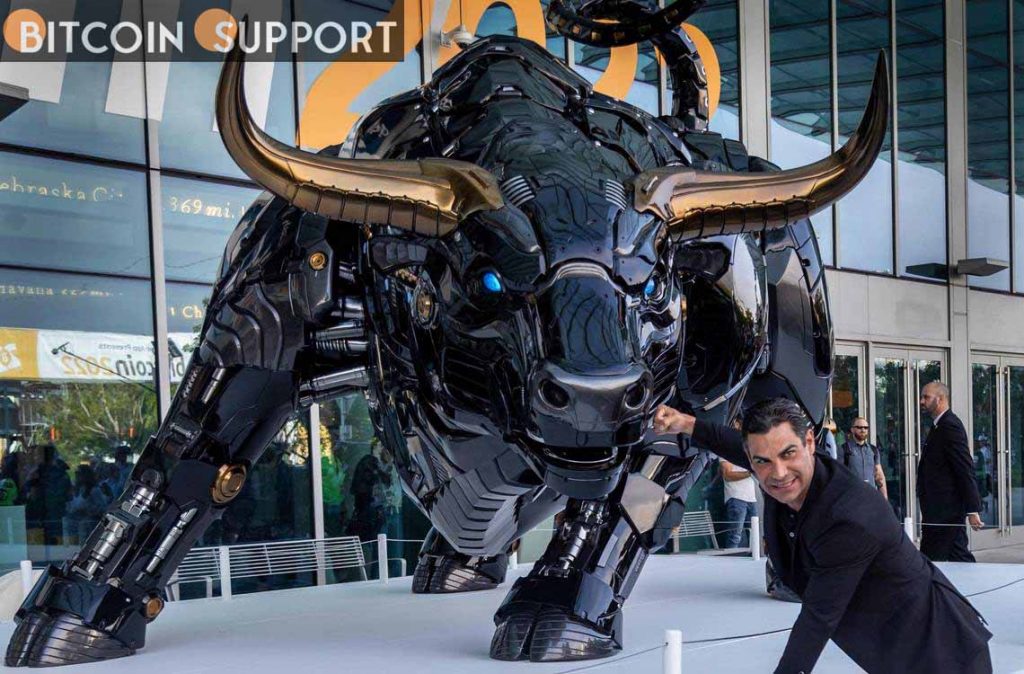 The Bitcoin 2022 conference got off to a bullish start with words from Mayor Francis Suarez, who was decked up in Bitcoin regalia and unveiled Miami’s counterpart to Wall Street’s Charging Bull.

Miami Mayor Francis Suarez erected a laser-eyed bull statue to commemorate the start of the Bitcoin 2022 conference, symbolising Miami’s self-proclaimed status as the “world’s capital of crypto.” According to the official website, the statue is a 3,000-pound robotic-looking bull in the style of the Charging Bull of Wall Street. Tradestation, a Florida-based finance corporation, commissioned the statue.

“New York is the former financial center… I give you the Miami bull!”

It was displayed on April 6 at the Miami Beach Convention Center, where the meeting is taking place, and was instantly dubbed ‘A Crime Against God’ by doubters at Intelligencer. The crypto community, on the other hand, has taken a shine to the new icon of finance’s future. “The bulls are in control,” Morgan Creek Digital co-founder Anthony “Pomp” Pompliano tweeted on April 7.

CZ, the founder and CEO of Binance, tweeted that the bull is “pretty cool.”

The bull will greet the 30,000 people scheduled to attend this year’s conference before being put out to pasture on the Miami-Dade College campus following the event. From April 6 to 9, the conference will take place over four days.

The conference is divided into five stages, the largest of which can accommodate 15,000 people. The event began with a combined fireside talk with Pomp and Galaxy Digital CEO Mike Novogratz, and continued with chats from Bitcoin community icons Nick Szabo, Jameson Lopp, Dan Held, and others. PayPal founder Peter Thiel, NFL star Odell Beckham Jr., and MicroStrategy CEO Michael Saylor are among the other speakers.

El Salvador’s president, Nayib Bukele, has withdrawn from the summit at the last minute. President Bukele is coping with a gang violence outbreak in his country, which has resulted in the imposition of a state of emergency that suspends key civil liberties, causing worry among human rights organisations. In a letter to conference delegates, Bukele cited “unforeseen circumstances,” according to a tweet from the Bitcoin 2022 Twitter account on April 7.

We’re sharing a letter from President @nayibbukele who is unfortunately no longer able to attend Bitcoin 2022 due to unforeseen circumstances in El Salvador which require his urgent attention. We stand in solidarity with the Salvadorian people during these difficult times. READ: pic.twitter.com/wbFXMY60c0

Bukele revealed his ambition to make Bitcoin (BTC) legal cash in his country at last year’s Bitcoin 2021 conference, which was also held in Miami. Despite a strong start to the year, markets have turned bearish, with Bitcoin down 6.26 percent this week and 4.37 percent in the last 24 hours to a weekly low of $43,401, according to statistics.