These three indications are typically used by astute traders to determine when an altcoin season may begin.

It is commonly acknowledged that the fate of the cryptocurrency market is mostly dependent on the performance of Bitcoin (BTC), which makes this a favourable time for crypto traders who choose to invest in other cryptocurrencies.

When BTC price declines, altcoins tend to follow, but when the bottoming process begins, altcoins tend to rise during Bitcoin’s consolidation stages, which often results in the declaration of an altcoin season. Despite the fact that Bitcoin’s current drop below $30,000 indicates that it’s a bit too early to declare an altseason, analysts continue to predict a variety of scenarios that point to an altcoin season. Let’s examine this.

ETH/BTC price action may serve as an early warning sign

Analyst and pseudonymous Twitter user PlanDeFi suggested the likelihood of an altcoin season using the ETH/BTC chart as a signal. He uploaded the following graphic comparing the performance of ETH/BTC in 2016 and 2017 to its performance in 2021 and 2022. 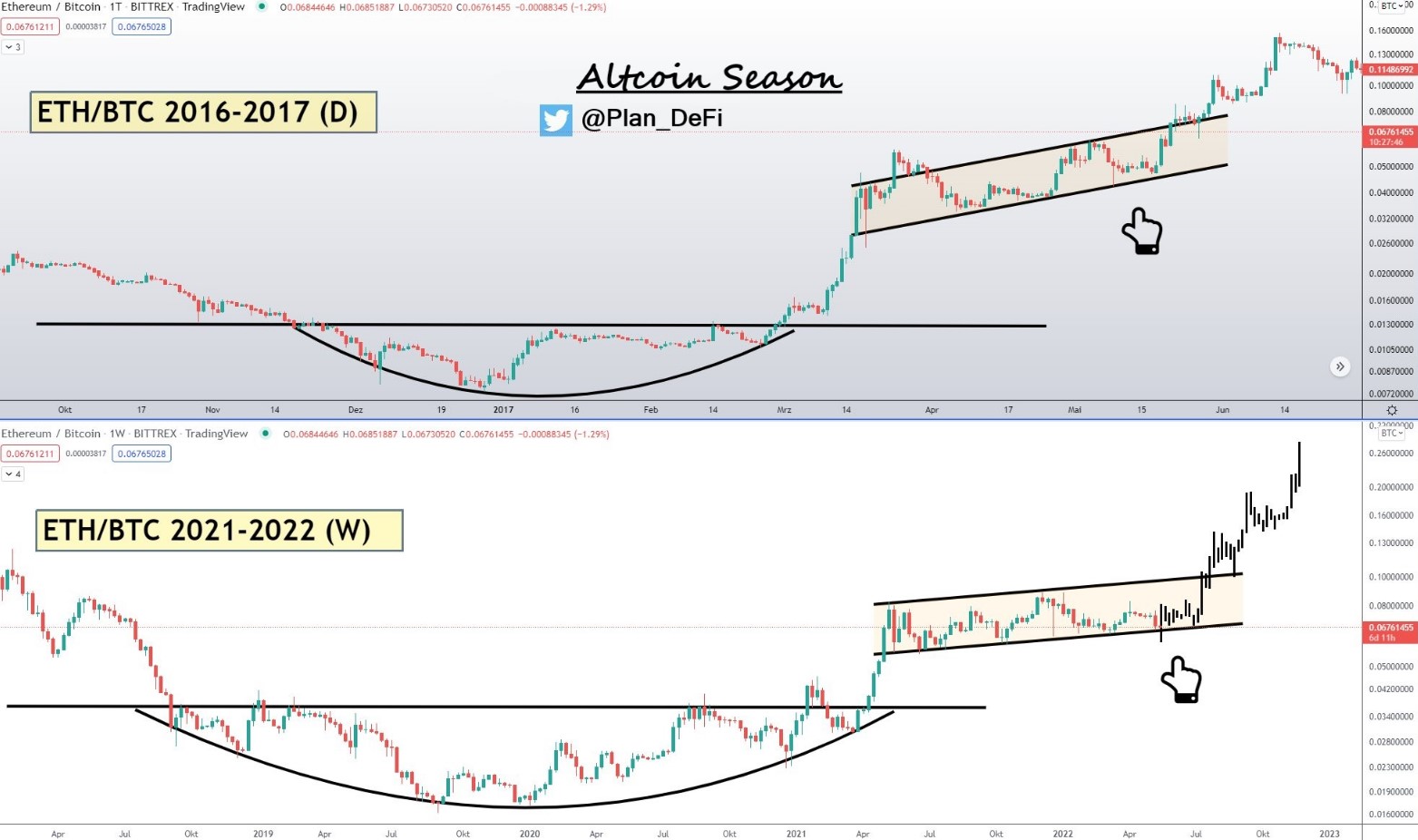 According to the supplied forecast, the next altseason could begin somewhere after the beginning of July and continue through the end of 2022.

A 2017 fractal indicates an impending altseason.

El Crypto Prof provided additional evidence that the market may be at an inflection point by posting the following chart examining the history of altcoin market capitalization.

Regarding altcoins, I envision the following scenario playing out. Too many similarities exist with the preceding cycle. RSI looks fantastic as well. The following wave will leave many behind.

Bitcoin Season has officially arrived on the market.

Fractals are aesthetically beautiful and give hope to discouraged traders, but most fail to materialise and cannot be relied upon as effective trading analysis tools.

The Altseason Indicator provides a more metric-based way for determining when the market is in “Bitcoin season” or “altcoin season.”

According to the chart above, it does not appear likely that an altseason will occur in the near future, as the measure is now displaying a value of 24, although the threshold for an altseason is 75.

Based on the past performance of the index, it has taken at least two to three months for it to ascend from the region indicating Bitcoin season to the level indicating altcoin season. According to the indicator’s current forecasts, an altcoin season may not begin until August or September 2022.