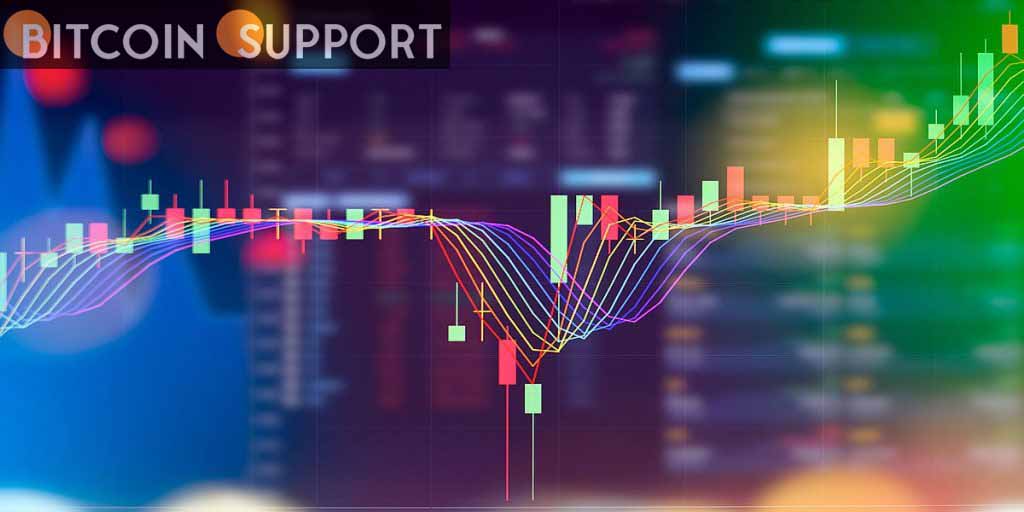 ADA, AXS, LINK, and FTT may begin a robust comeback in the next days if BTC maintains its support level of $45,000.

Bitcoin (BTC) is hoping to extend its winning streak to two weeks in a row and close at its highest weekly closing price year to date. According to Glassnode’s on-chain statistics, the price rebound of Bitcoin was fueled by demand in the spot markets. This is likely to encourage bulls, as history implies that persistent rise is a result of spot market demand.

Another encouraging clue is the recent surge in demand for the ProShares Bitcoin Strategy exchange-traded fund (BITO), which increased its exposure to bitcoin to a record level. According to Arcane Research, the significant inflows “indicate that traditional investment vehicles’ desire for Bitcoin is expanding.” 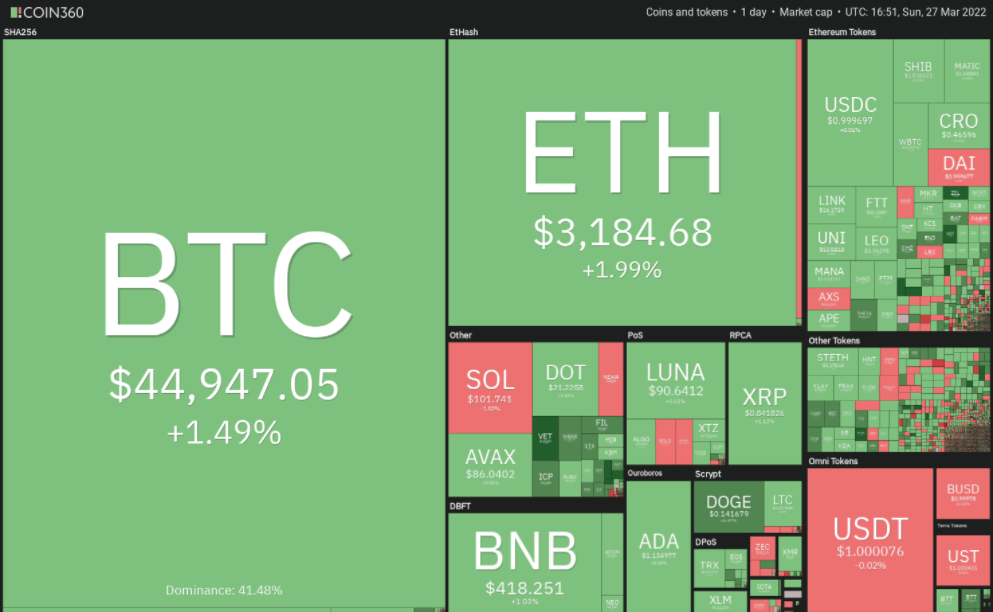 Along with Bitcoin, investors are flocking to the broader crypto industry. According to analytics firm Fundstrat, venture capitalists invested $4 billion in the cryptocurrency market over the final three weeks of February.

Could purchasers maintain the momentum and continue the Bitcoin and altcoins relief rally? Let’s examine the charts of the top five cryptocurrencies that we believe will outperform in the near future.

The lengthy wick on March 25’s Bitcoin candlestick indicates that the bears are defending the $45,400 overhead resistance. A slight plus is that the bulls have not given up much ground, implying that traders are not in a hurry to close their bets. 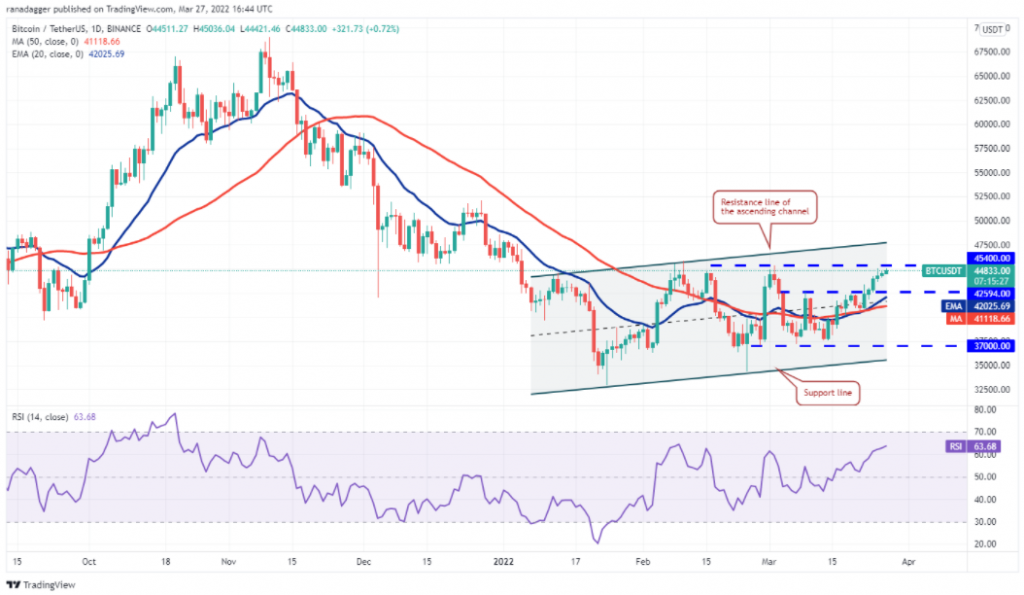 This level may act as a roadblock once again, but if bulls overcome it, the pair might rally to the psychological $50,000 level.

In contrast to this notion, if the price falls below $45,400, the bears will attempt to bring the pair down to the pair’s strong support level of $42,594. On the downside, this is a critical level to monitor because if bulls convert it to support, the probability of a break over $45,400 increases.

The bears will need to pull and hold the price below the moving averages in order to communicate to the bulls that they have been driven back. 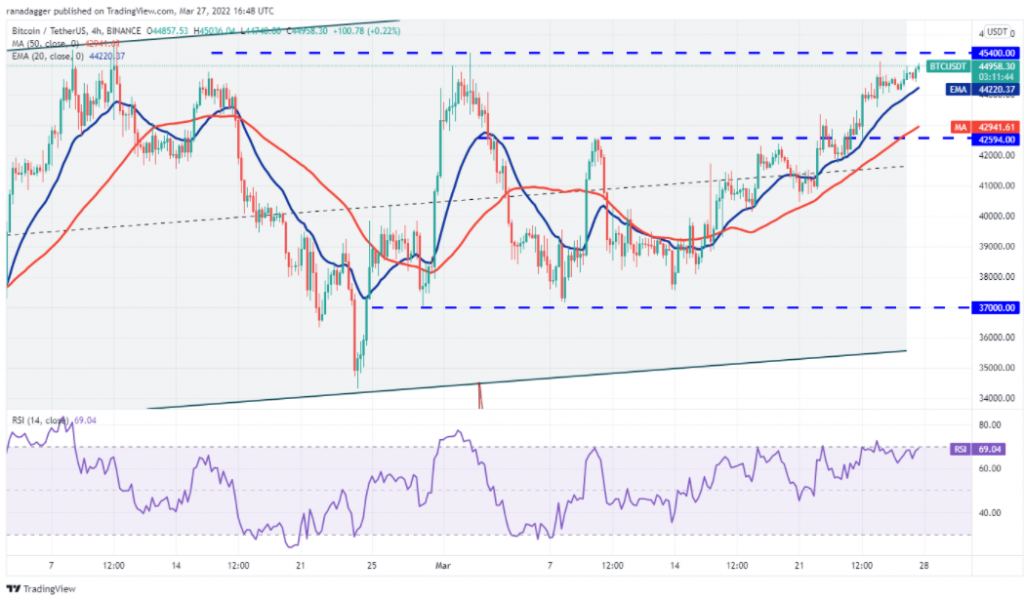 On the 4-hour chart, the price reversed from the overhead resistance, but the bulls prevented the pair from falling below the 20-EMA. This indicates that traders are purchasing on every slight correction.

The rising moving averages and RSI near the overbought zone indicate that the route of least resistance is upward. This bullish perspective will be rendered incorrect in the near future if the price breaks and holds below the 20-EMA. In that instance, the pair’s value may plummet to $42,594.

Cardano (ADA) has been able to maintain a price above the key level of $1 for several days. This shows that bulls who purchased at lower levels are not aggressively booking profits, as they believe the recovery will continue. 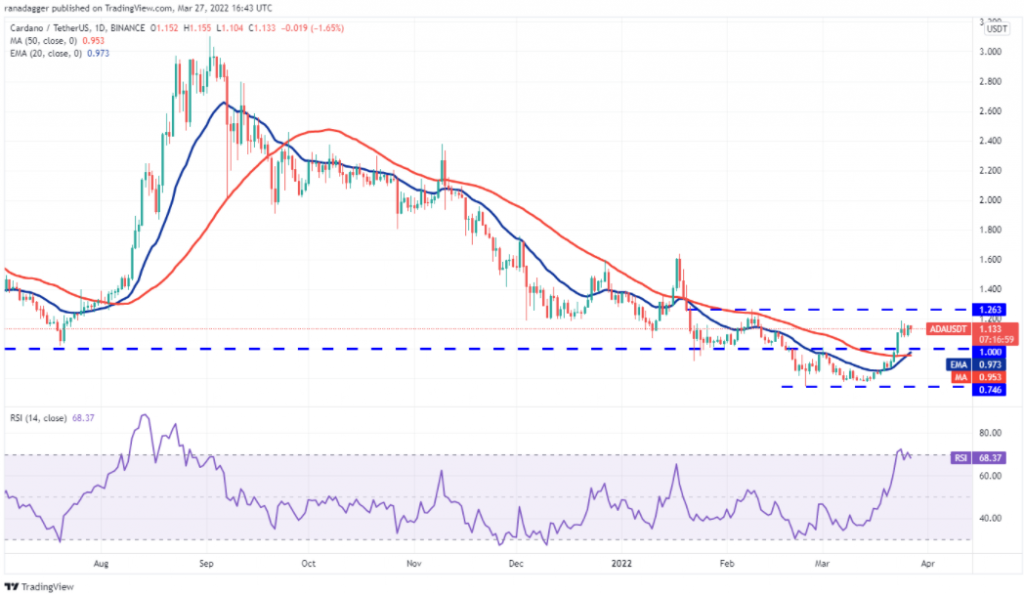 The moving averages have completed a bullish crossover, and the RSI has entered the positive territory, indicating that bulls are in control. If buyers can push the price over $1.26 and hold it there, positive momentum may resume and the ADA/USDT pair may surge to the next major resistance level at $1.60.

Alternatively, if the price declines from $1.26 but then recovers to $1, this indicates that the pair may remain range-bound between the two levels for a few more days. To invalidate the bullish perspective, the bears must descend and maintain the price below the moving averages.

The 4-hour chart indicates that the bears are defending the overhead resistance at $1.20 strongly, but a slight positive is that the bulls have not allowed the price to fall below the 20-EMA. If the price climbs from its present level, bulls will attempt to break through the $1.20 resistance level and push the pair to $1.26.

If, on the other hand, the price reverses and breaks below the 20-EMA, this indicates that the bullish momentum has faded. The pair might then gradually retrace its steps toward the pair’s strong support level of $1.

Axie Infinity (AXS) has traded in a range of $72 to $44 over the last few days. On March 25, buyers pushed the price over the overhead resistance but were unable to sustain the gains. This suggests that the bears are actively guarding the level. 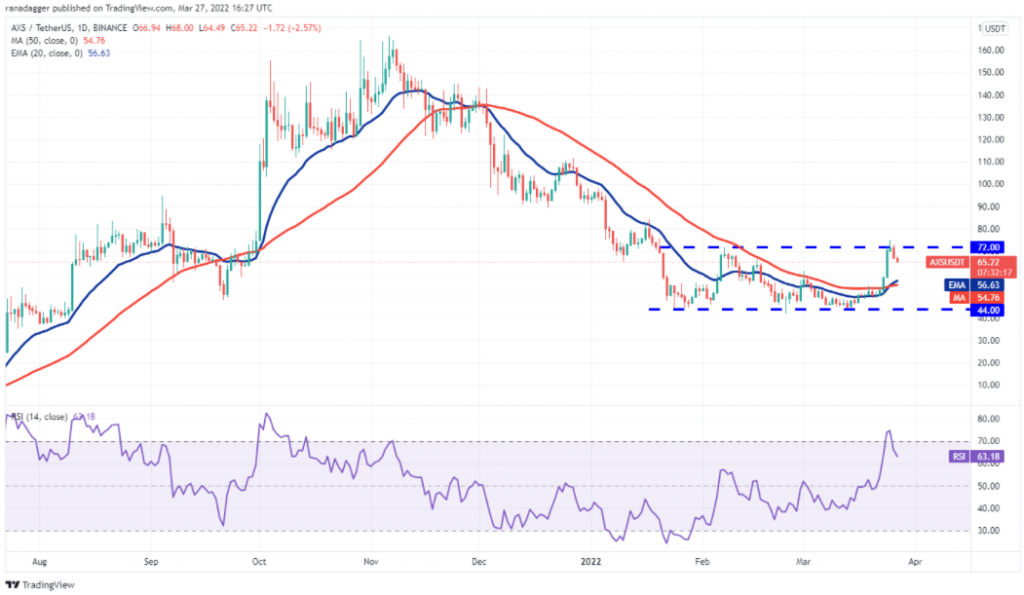 The moving averages have completed a bullish crossover, and the RSI is in positive zone, indicating that buyers have an advantage.

If the price reverses from its current level or bounces off the 20-day exponential moving average ($56), bulls will attempt to push the AXS/USDT pair above $72. If they are successful in doing so, the uptrend may gain pace and the pair may climb above $100.

This bullish perspective will become worthless if the price continues to fall and breaks below the 20-day exponential moving average. This could confine the pair within a range for a few more days. 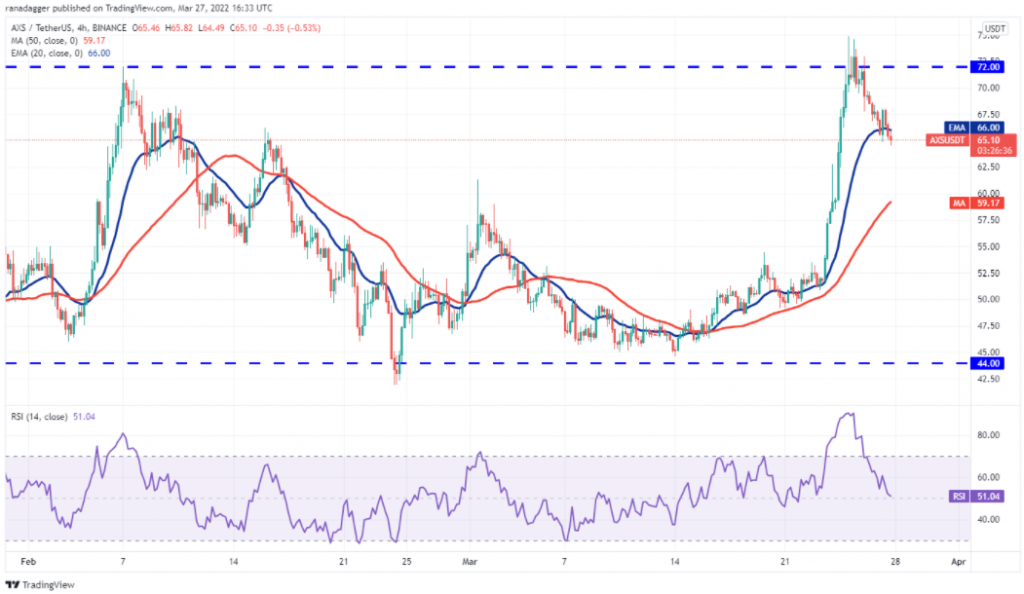 The 4-hour chart indicates that bulls pushed the price over the overhead resistance level of $72 but were unable to sustain the gains. This may have prompted short-term traders to book profits, lowering the price below the 20-EMA.

If the price rises from its current level and breaks above $68, this suggests that investors should accumulate on dips. The purchasers will then attempt to overcome the barrier at $72 and initiate a new upward movement.

In contrast to this assumption, if the price remains below the 20-EMA for an extended period of time, the correction may reach the 50-simple moving average.

For several months, Chainlink (LINK) has traded in a wide range between $13 and $36. Although bears drove the price below the range’s support, they were unable to sustain the breakdown. This indicates that the markets reacted negatively to the lower levels. 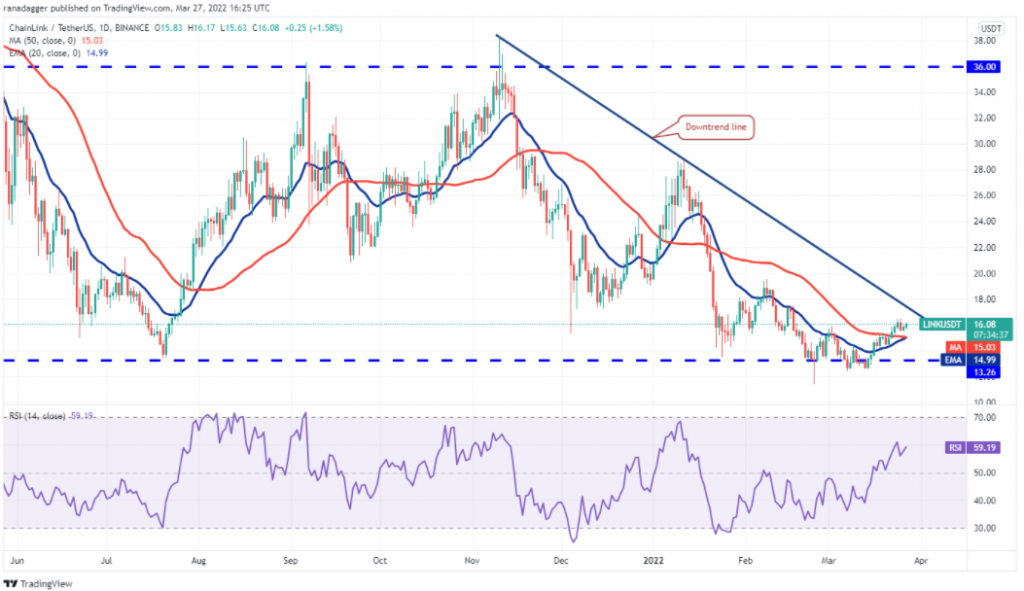 The moving averages have completed a bullish crossover, and the RSI is in positive zone, indicating the buyers are in control. The move may encounter resistance at the downtrend line, however if this obstacle is overcome, the LINK/USDT pair may rally to $20.

Alternatively, if the price declines from its current level, the moving averages will almost certainly operate as solid support. If the price bounces off of it, the likelihood of a break above the downtrend line increases. This bullish outlook will be rendered meaningless if the bears manage to push the price below the moving averages. This might pave the way for a possible price cut to $13. 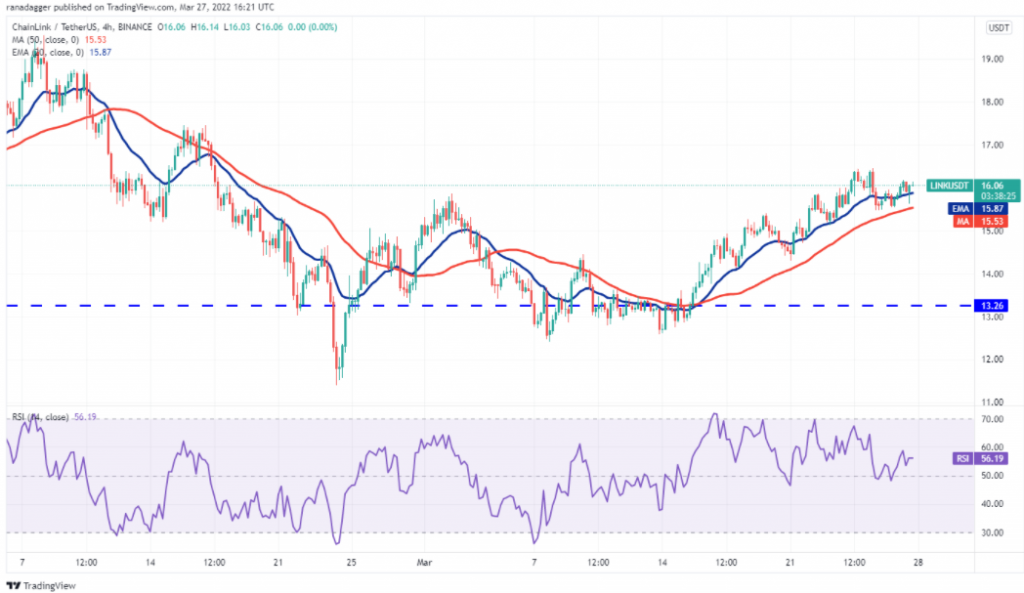 At $16.50, the bears are staging a robust defense, but a slight positive is that buyers have prevented the price from falling below the 50-SMA. Bulls will attempt to push the pair above $16.50 if the price advances from its current level or bounces off the moving averages. If they are successful, the pair might climb as high as $17.50.

In contrast to this belief, a break below the 50-SMA indicates that short-term bulls may be winding down their bets. There is a modest support level at $15, but if it fails, the pair may fall to $14.

On March 24, FTX Token (FTT) broke through and closed above $49, completing an ascending triangle pattern. Although investors successfully drove the price above the psychological resistance level of $50 on March 25, they were unable to sustain the gains. 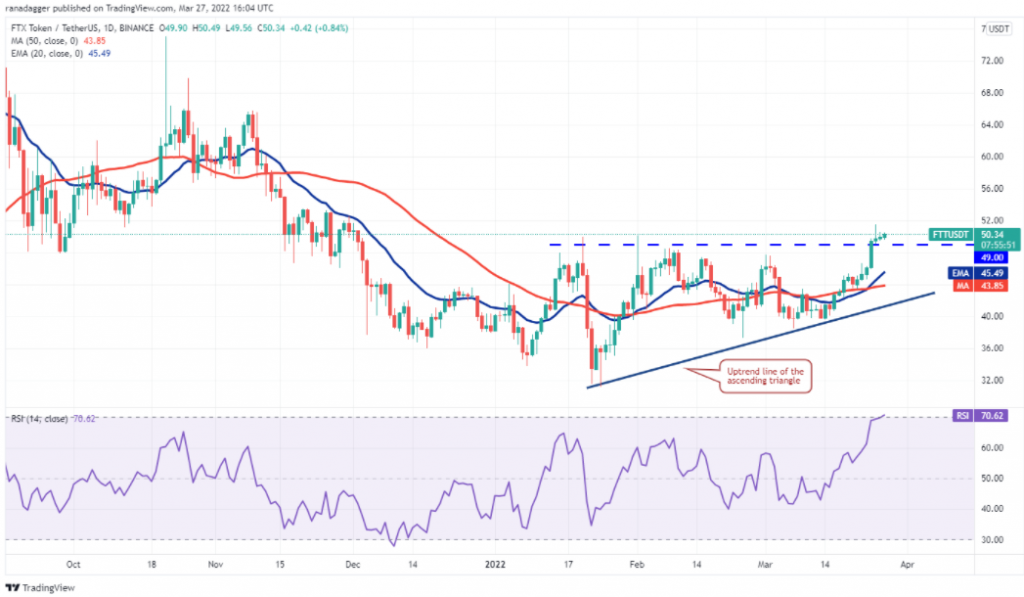 This indicates that the bears have not yet abandoned their positions and are continuing to sell at higher levels. The bears will now attempt to drive the price down below $49 and sustain it there. If they succeed, the aggressive bulls who purchased the triangle breakout may become trapped. This might push the FTT/USDT pair down to the 20-day exponential moving average ($45).

If the stock corrects back above this level, buyers will attempt to break through the overhead resistance zone between $49 and $52 and resume the uptrend.

If, on the other hand, the price falls below the moving averages, this indicates that bears are making a strong return attempt. Breaking and closing below the triangle’s uptrend line invalidates the bullish pattern. The pair may then fall to $39. 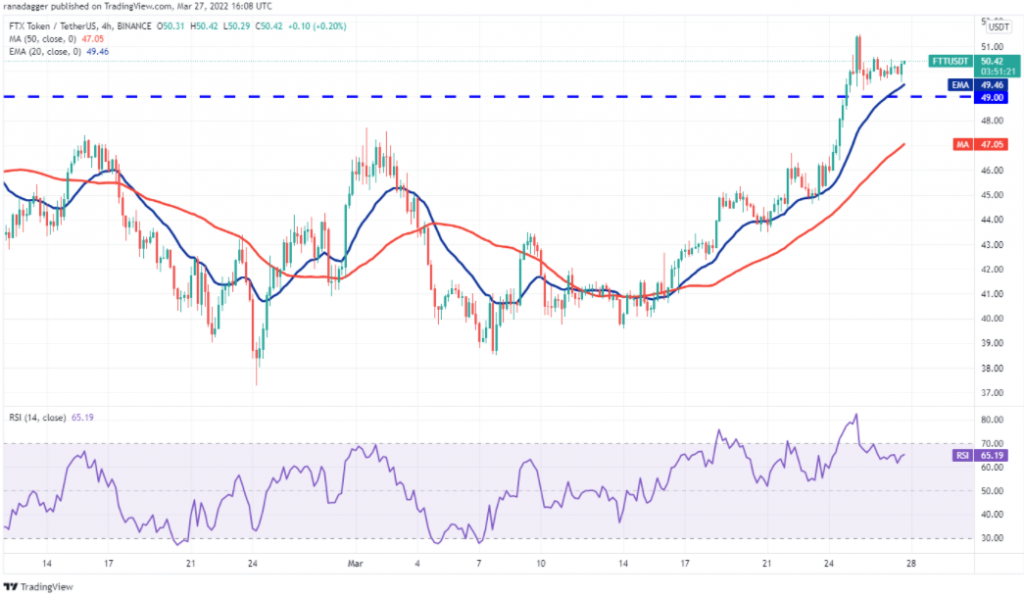 The rise above $51 drove the Relative Strength Index (RSI) well into overbought territory. These moves are frequently followed by a severe correction or consolidation. If bears manage to push the price below $49, the pair may continue to drop towards the 50-SMA.

If the market bounces back above this level, buyers will attempt to push the pair above $52 and resume the uptrend. On the other side, if bears successfully push the price below the 50-SMA, selling might get more intense and the pair could fall under $45.