There are three reasons why Bitcoin can recoup some of its losses and rise to $60,000 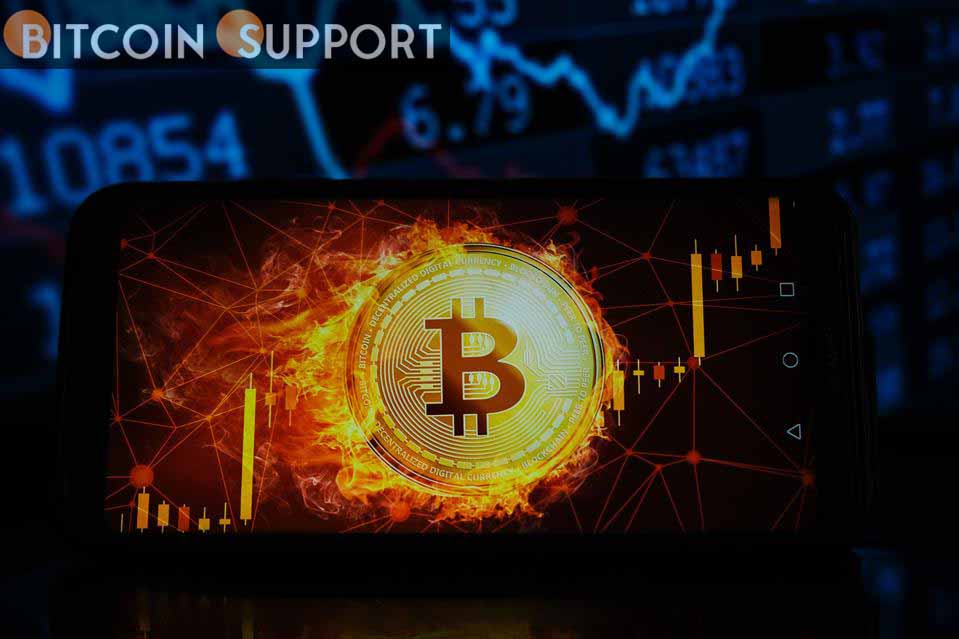 Numerous technical and on-chain indicators are indicating a positive trend despite the recent BTC price decline below $40,000.

The losses looked to be mostly the result of selloffs in risk-on markets, headed by an 18 percent increase in international oil benchmark Brent crude to about $139 per barrel early Monday, its highest level since 2008.

Nonetheless, Bitcoin’s inability to hedge against continuous market volatility cast doubt on its “safe haven” label, as its correlation coefficient with the Nasdaq Composite reached 0.87 on Monday. 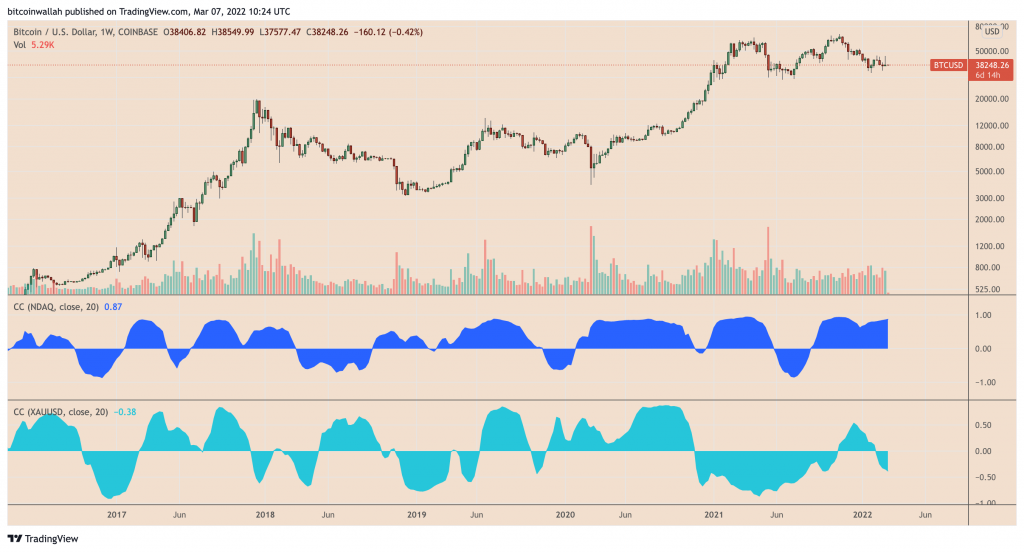 In comparison, Bitcoin’s correlation with its chief rival gold was minus 0.38, indicating that the two have been mostly moving in different directions throughout the present market upheaval.

Keeping an open mind about crypto, but given the inflating US dollar and the stark reminder that governments can and will under certain circumstances freeze accounts and block payments, wouldn’t you think crypto would be having a moment now? Not seeing it in the price, so far….

On the one hand, Bitcoin’s potential for further drop remains strong in light of the deteriorating geopolitical situation between Russia and Ukraine and the probability of additional rate hikes in March.

On shorter timeframes, however, several technical and on-chain signs are flashing positive, indicating a possible price bounce towards $60,000 in the months ahead.

Support for a multi-year ascending trendline

If history is any guide, Bitcoin’s recent slide to its multi-year rising trendline support may pave the way for a possible rebound toward the $60,000 resistance level.

Notably, BTC’s trendline support forms an ascending triangle when combined with a horizontal resistance level above. Since December 2020, this configuration has been active, with the lower level operating as an accumulation zone and the upper level acting as a distribution zone for traders.

The number of BTC whales is increasing

Additionally, on-chain data from CoinMetrics indicates that wealthy investors have been purchasing Bitcoin at a similar level. 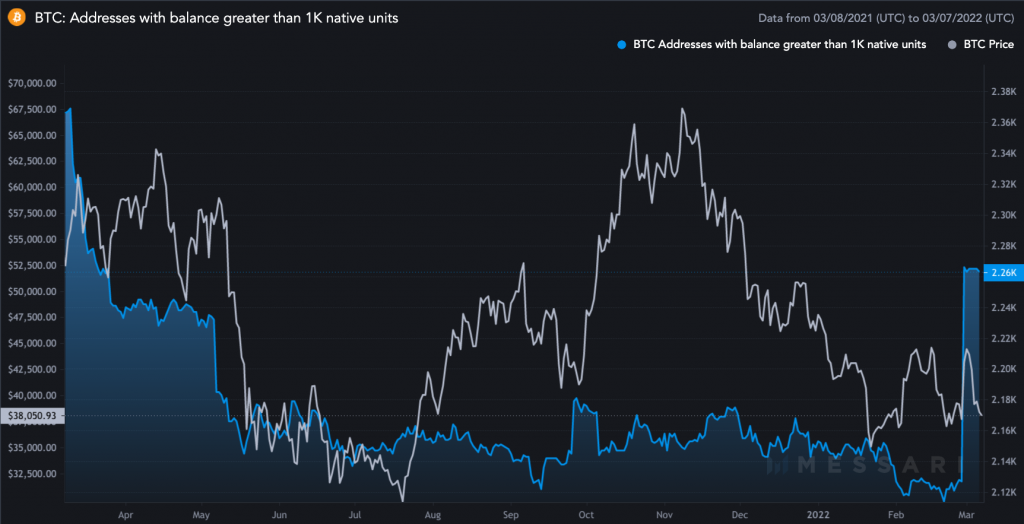 During the same time frame, the price of BTC increased from near $38,000 to nearly $45,000. As of March 6, the number of Bitcoin addresses had decreased to just 2,263 despite the fact that BTC had fallen below $38,000, implying that wealthy investors continued to maintain their Bitcoin tokens despite the interim bear market sentiment.

Johal Miles, an independent market expert, added that the range between $33,000 and $38,000 has been a “high volume accumulation zone” for Bitcoin bulls, with bears finding it “difficult” to break through.

Bitcoin currently resting on the entire range point of control.

High volume accumulation zone, a tough order for bears to push through this. Best of luck to them.$BTC pic.twitter.com/0LWgPFMiR5

According to data from crypto analytics firm Santiment, Bitcoin’s weekly outflow from exchanges has been positive 81 percent of the time since October 2021, despite the fact that BTC is trading near a six-month low.

“Intriguingly, BTC has moved more away from exchanges than it has toward exchanges in 21 of the last 26 weeks,” Santiment tweeted Monday, citing the BTC exchange flow balance chart attached below. 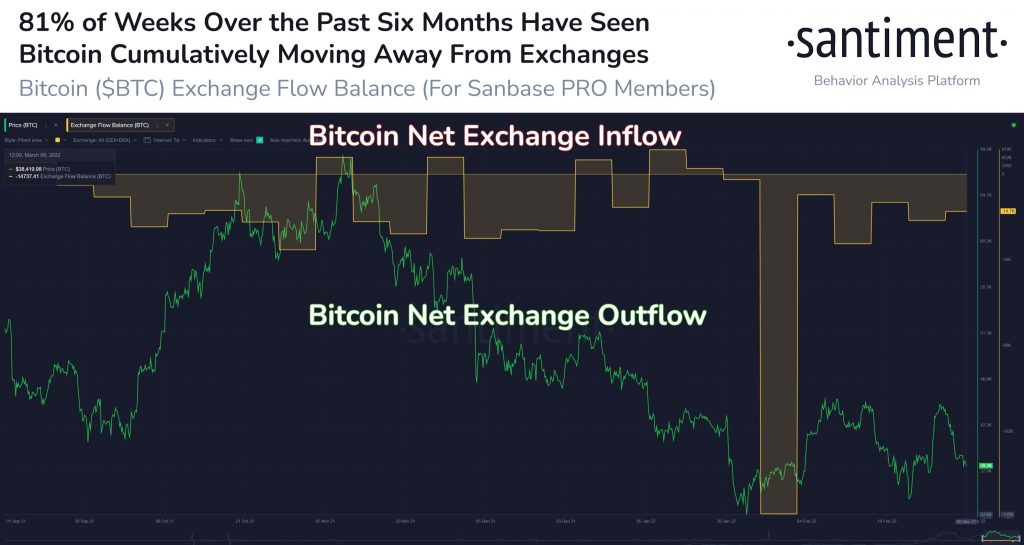 Increased Bitcoin outflow from exchanges indicates that investors intend to retain for the long run. Increased Bitcoin inflows to exchanges, on the other hand, indicate an intention to trade BTC for other digital assets or fiat currency.