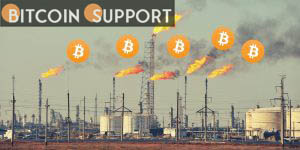 Can Bitcoin mining contribute to the solution rather than the problem of greenhouse gas emissions?

Bitcoin (BTC) mining’s energy consumption and environmental impact have been criticized and scrutinized by a number of international financial organizations. According to the International Monetary Fund (IMF), Bitcoin mining consumes “considerable computational power and electricity.”

Bitcoin mining is an energy-intensive operation since it is a proof-of-work (PoW) blockchain network that requires users to provide cryptographic proof to the network that a specified amount of computing effort has been expended. The information used to verify this is stored in a block that other network participants can accept into the network.

Elon Musk, one of the world’s wealthiest men and co-founder and CEO of Tesla, said in February 2021 that the automaker will accept Bitcoin as payment for its products and services.

Tesla, however, withdrew support for Bitcoin payments in May of that year, citing concerns over the “rapidly expanding consumption of fossil fuels for Bitcoin mining and transactions, particularly coal.” Musk also lauded Dogecoin (DOGE) as a superior payment method to Bitcoin (BTC) due to the high environmental cost of BTC transactions.

However, it appears as though a new solution is emerging that has the ability to challenge the narrative that has infiltrated the popular conscience.

Natural gas associated with oil drilling is a byproduct whose volume is frequently outweighed by the costs of transporting it to a refinery, leaving it “stranded” at the well. As a result, it is frequently simply burned off at the oil derrick, gaining the term “flare gas.”

CNBC reported on Feb. 17 that oil company ConocoPhillips is piloting a program near Baken, North Dakota. Rather than burning connected gas, the company sells it to third-party Bitcoin miners as fuel.

The concept of mining Bitcoin with accompanying gas is not new. Brent Whitehead and Matt Lohstroh founded Giga Energy Solutions in 2019, which mines Bitcoin using power generated by such gas. The company transports a shipping container with Bitcoin mining equipment to an oil well and then diverts the stranded natural gas to generators that convert it to energy for use in Bitcoin mining.

Crusoe Energy is another startup that mines Bitcoin using the energy generated by flare gas. The company has developed to become one of the industry’s largest players and has attracted funding from Coinbase, one of the world’s oldest cryptocurrency exchanges, and Winklevoss Capital, a company created by the Winklevoss twins, the creators of cryptocurrency exchange Gemini.

According to Crusoe Energy Systems, using this gas to mine Bitcoin reduces CO2-equivalent emissions by approximately 63% when compared to continuing flaring.

Cointelegraph spoke with Ethan Vera, chief financial officer and chief operations officer at Viridi Funds, a company that provides cryptocurrency investment opportunities to Bitcoin miners, about the impact of ConocoPhilips’ involvement in the innovation.

“While ConocoPhillips is one of the big energy firms that has openly announced its participation into Bitcoin mining, numerous other energy companies have already begun the process of establishing mini-test sites,” Ver explained. If the economics of Bitcoin mining improve and total mining revenue in USD increases, many of the world’s largest energy producers will aim to expand their presence.”

The energy consumption associated with Bitcoin mining may be exaggerated.

According to the University of Cambridge’s Cambridge Bitcoin Electricity Consumption Index, the projected yearly power demand for the Bitcoin network is 15.57 GW (GigaWatts) (TWh). A review of historical data on the network’s power requirement reveals that this demand has been steadily increasing over the years as the network expands. 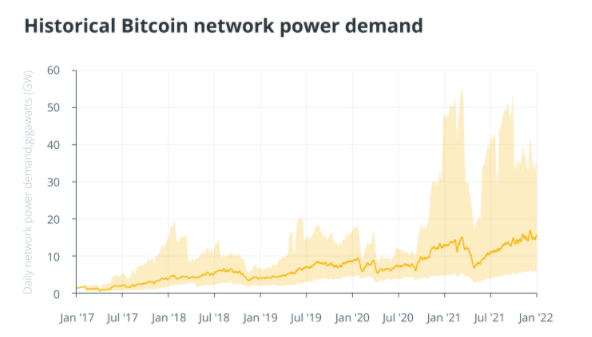 Despite this rise in electricity demand, the environmental impact may be exaggerated. CoinShares published a paper in January this year attempting to quantify the carbon emissions associated with Bitcoin mining. Contrary to common opinion, the report’s findings indicate that Bitcoin mining contributes only 0.08 percent to global carbon dioxide (CO2) output. According to the analysis, the network emitted 42 megatons (Mt) (1Mt = 1 million tonnes) of CO2 in 2021, accounting for a fraction of the world’s total CO2 emissions of 49,360 Mts.

“The environmental impact of Bitcoin mining is massively exaggerated by traditional financial authorities (IMF, etc.) because they know they can divide a new counterculture movement by using fake environmental arguments. They are trying to gaslight us against each other. They gaslight the world with fake green arguments, and I understand why: They don’t want to lose influence over the levers of power of a system that only works for the elite.”

Vera stated in this regard that determining the environmental impact of Bitcoin is a highly intricate subject that cannot be simply described by the energy consumed metric. According to him, “Bitcoin mining frequently incentivizes the development of renewable energy, which will have a major effect on long-term energy infrastructure and environmental impact.”

Oil tycoons could spearhead the effort to green Bitcoin.

Given that using stranded natural gas to mine Bitcoin could significantly cut mining’s net carbon emissions, as well as emissions from flare gas, other major oil corporations may quickly seize the opportunity, especially given governments and regulators’ crackdown on gas flaring.

Colorado officials got the initial go-ahead in November 2020 to prohibit gas flaring in order to reduce methane emissions.

In March 2021, regulators in the state of New Mexico issued a law requiring oil operators to gradually phase out gas flaring. By April 2022, the law requires that 98 percent of naturally stranded gas be captured rather being flared.

Such judgments, however, are exceedingly difficult to make in a country where both political parties rely significantly on lobbying from large oil companies. Bloomberg reported in October 2021 that President Biden’s campaign on methane emissions will halt short of enforcing a ban on flaring.

An explicit prohibition on gas flaring would be beneficial for the Bitcoin mining sector, as it would leave oil producers with two options. To begin, to reduce the amount of oil produced that is not commercially viable. Alternatively, utilize extra stranded natural gas on-site, which is where Bitcoin miners can help establish synergies with major oil firms such as ExxonMobil, British Petroleum (BP), Chevron, or Valero Energy.

Vera explained, “With high oil prices, the bulk of these producers are shifting to on-site utilization of stranded gas, such as Bitcoin mining, rather than burning it.” We anticipate this tendency will continue in the future as more governments curb oil corporations’ capacity to flare excess gas.”

Additionally, the World Bank has its own project to assist countries in reducing gas flaring. The Global Gas Flaring Reduction Partnership (GGFR) is a multi-donor trust fund comprised of governments, oil firms, and multinational corporations devoted to gas flaring reduction. Bitcoin mining pools and companies may form partnerships with this trust fund in order to advance this endeavor.

However, oil firms may have a double standard when it comes to the subject at hand, casting doubt on their intentions. For instance, in 2020, BP petitioned Texas officials to prohibit routine natural gas flaring. However, the Texas Railroad Commission approved 121 of the company’s flaring petitions in January 2021.

With regulators and governments worldwide tightening down on gas flaring, the Bitcoin mining business offers a chance to help the environment by reducing CO2 and methane pollution. Vera continued by adding that “Bitcoin miners are a natural partner for all energy producers, including renewable, conventional, and unconventional.” Bitcoin mining enables these businesses to more efficiently manage and utilize their resources.”