The enormous upward surge coincided with the introduction of a $165 million fund by OKcoin to develop apps on the Bitcoin network using Stacks.

Stacks (STX) surrendered a sizable amount of its March 10 gains as the euphoria surrounding its $165 million pledge to promote Bitcoin (BTC) initiatives waned.

STX’s price fell more than 30% from its week-to-date high of $1.94 to as low as $1.33 on Friday. The selloff appeared technical in nature, as the $1.94-top fell within the same range that functioned as firm support between October 2021 and January 2022, only to revert to become a resistance level later in the year. 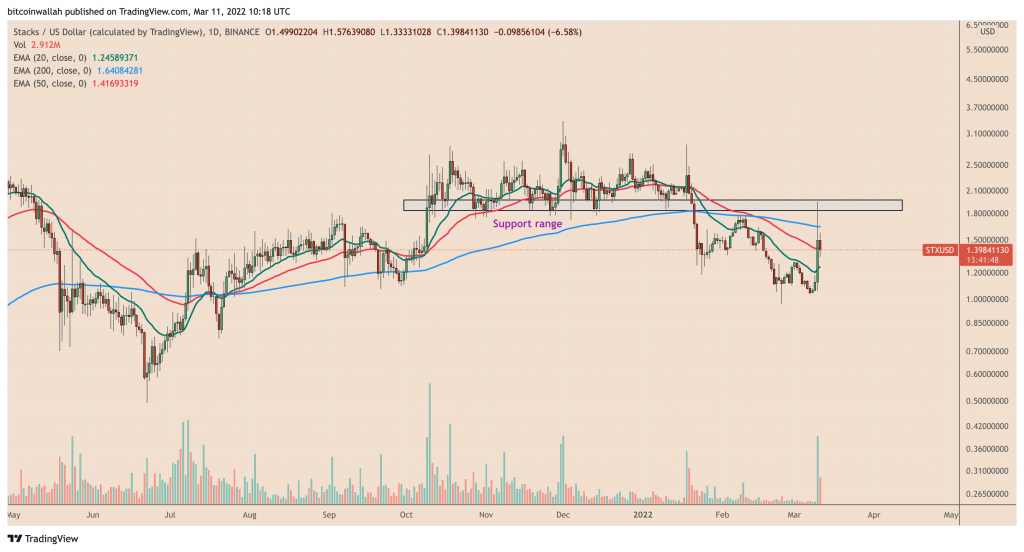 Additionally, traders appear to have seen selling chances as a result of STX’s long wick candlestick on March 10. Stacks soared by up to 73% early in the day, generating an abnormally long bullish wick on the daily chart, implying upside exhaustion.

The spike in the STX market on March 10 coincided with the introduction of “Bitcoin Odyssey,” a $165 million fund that will leverage Stacks’ open-source network for Bitcoin-based smart contracts to build Web3, decentralized finance (DeFi), and nonfungible token (NFT) projects on the Bitcoin blockchain.

Couldn't be happier to announce that we've partnered with @Okcoin and @StacksOrg to launch a $165M ecosystem fund to invest in Web3, Defi, and NFTs on Bitcoin!https://t.co/VUDyEIHn8P via @cointelegraph

Notably, STX acts as a utility token within the Stacks ecosystem, allowing for the payment of network and contract activity. STX holders can also use “Stacking” to support the Stacks network’s blockchain consensus method. In exchange, they receive BTC payouts.

Traders appear to have gone to STX in droves, anticipating a surge in demand following the debut of the Bitcoin Odessey. For instance, cryptocurrency exchange OKcoin, the main backer behind the $160-million-fund, promoted the Stacks token for its bullish outlook, saying it is “not a bad time to get in on” Stacks.

Is an all-time high imminent?

Interestingly, STX’s continuous price recovery occurred at the intersection of two critical support levels, with at least one indicating that the Stacks token is on track to set a new all-time high in the near future.

Following its recovery from the dual-support level, STX now appears poised to close above its two interim exponential moving averages (EMAs) — the 20-week (green) and 50-week (red) EMAs. If the breakout is successful, the Stacks token may revisit another upward sloping trendline that has functioned as a barrier since 2020.

On the other hand, a break below the ascending trendline support near the 0.786 Fib level near $0.63 could result from a pullback from the 20-50 EMA resistances.