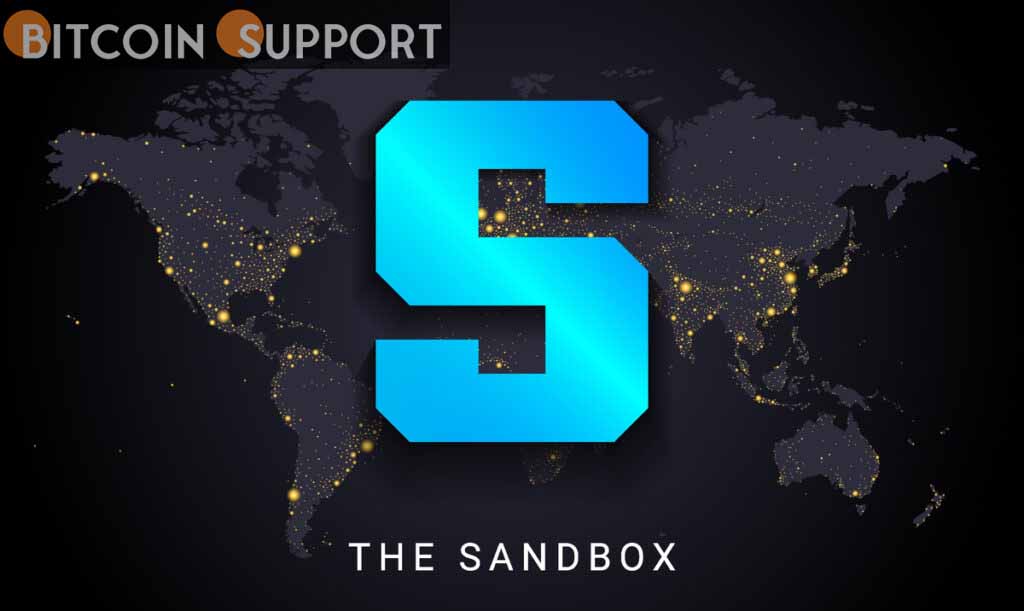 For the first time since July, SAND has fallen below the 200-day average.

After weeks of defying the bearish trend, SAND, the native token of the Ethereum-based virtual-reality platform The Sandbox, has finally caught up with the rest of the crypto market.

Early Tuesday, the cryptocurrency fell below the widely followed 200-day moving average (MA), joining peers from other crypto sub-sectors in suggesting a bearish market. According to Binance statistics collected by charting platform TradingView, the coin fell below the key $2.93 mark during Asian hours, falling to its lowest level since January 25. In July 2021, it traded below the 200-day MA for the last time.

Earlier this month, The Sandbox added a staking mechanism to scaling solution Polygon, allowing users to stake SAND without having to worry about gas prices (transaction costs). However, the move failed to halt the fall toward the 200-day moving average. Staking is the technique of locking funds in a blockchain for a set amount of time in order to contribute to the security of the network in exchange for rewards.

The figure, which reflects the average UTC closing price over the previous 200 days, is a technical indicator that can be used to spot long-term trends. A general guideline in traditional finance is that if a stock is trading below its 200-day moving average, the trend is fundamentally downward. 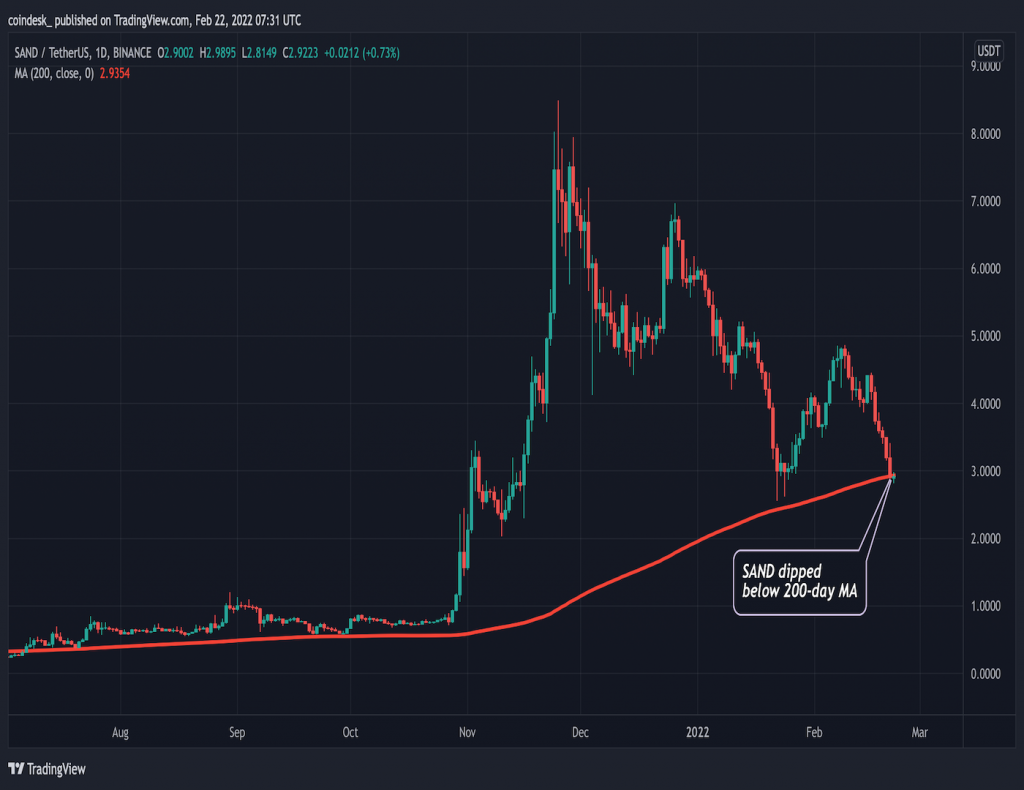 SAND is the latest of the main coins to enter the so-called negative region beneath the 200-day MA, having risen almost 750 percent in the final three months of 2021.

Bitcoin, the most valuable cryptocurrency, fell below the average in late December. A week later, ether, the second-largest cryptocurrency, and Axie Infinity’s AXS coin, a play-to-earn game, followed suit. UNI, LINK, XMR, AAVE, PERP, and YFI were among the heavyweights that went below their 200-day MAs early this year.

“Crypto markets’ dips below the 200-day MA have historically been followed by a couple of quarters of consolidation before resuming their upward trend. In such cases, holding BTC has proven to be a solid way to protect the downside and minimise overall portfolio volatility “Tip has been added.

“Three months ago, when bitcoin’s all-time high was not sustained due to Fed rate hike fears, we received a fantastic bull market top signal. Since then, bitcoin’s price has plummeted, and other cryptocurrencies have followed suit.”

“Alternative cryptocurrencies may bleed even more,” Jain warned, “since the bitcoin market shows no signs of panic selling or capitulation by long-term holders, and the bottom may be far away.”

If the SAND bears gain a foothold below the average, additional losses are likely. Following the total altcoin market cap’s dip below the 200-day MA in mid-January, the broader market experienced more significant selling pressure, as shown in the chart below. 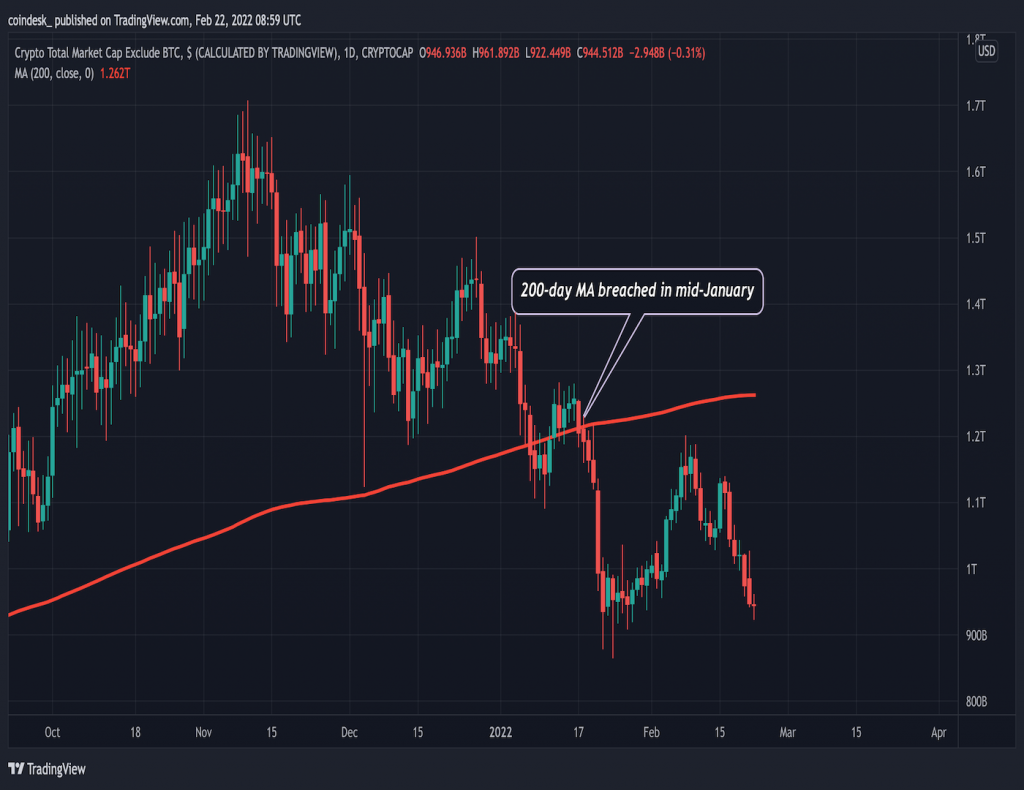 The 200-day MA, however, is not always accurate as a stand-alone indication.

“I, like many others, rely heavily on long moving averages. Please keep in mind that this is a lagging indication. As a result, it should only be used in conjunction with other tools and never by itself “ADM Investor Services International’s head of technical analysis and senior markets analyst, Eddie Tofpik, said.

Bearish macro factors appear to have aligned. “In the short run, European tensions could be an important influence,” said Griffin Ardern, a volatility trader with crypto-asset management firm Blofin. “Investors will choose commodities such as gold and crude oil over riskier equities and cryptos in a difficult environment.”

Early today, Russian President Vladimir Putin issued an order for troops to invade Eastern Ukraine, sending gold prices higher and financial markets lower. Bitcoin has mainly been directionless so far. “Most investors will not pay more attention to other cryptocurrencies if bitcoin and ether cannot rebound,” Ardern said, adding that there is no incentive to drive crypto higher at the moment and that the slide would most likely continue with the Federal Reserve set to announce a rate hike in March.