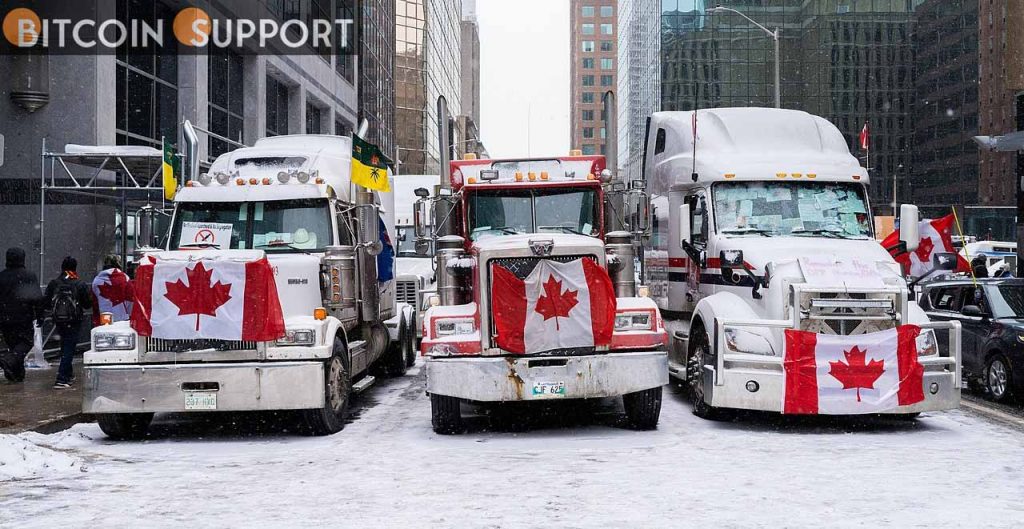 Despite the Canadian government’s efforts, the majority of the CAD 1.1 million (USD 874,000) in cryptoasset donations given to the trucker protests (aka “Freedom Convoy”), an initiative that grew out of the anti-COVID-19 health mandate rallies, are said to have escaped confiscation.

Five weeks after the Canadian government used the Emergencies Act to freeze the convoy’s assets, a joint operation led by the Ottawa Police Service (OPS), the Ontario Provincial Police (OPP), and the Royal Canadian Mounted Police (RCMP) is still looking for bitcoin (BTC) that was used to fund the convoy.

Local observers, however, suggest that the protesters’ supporters have been able to pay the caravan with cryptocurrency donations, according to local network CBC.

To date, Canadian law enforcement has been able to freeze BTC 5.96405398 in donations, accounting for almost 29% of the total. The remaining 71 percent of crypto assets have been rerouted to avoid state authorities seizing them.

The RCMP has placed an estimated 34 crypto wallets linked to the convoy on a blacklist, and Canadian crypto exchanges have been told to halt assisting transactions.

Despite this, Canadian media have reported on a wallet containing BTC 3 that was drained in a matter of days, with the monies being transferred to an unregistered account. On February 16, two days after the government invoked the Emergencies Act, the same account got close to BTC 15, and that total was then allocated across other accounts in BTC 0.004 increments.

“As we’ve seen, freeze orders have a tremendous limitation when it comes to bitcoin wallets,” Mathew Burgoyne, a Canadian crypto-focused lawyer based in Calgary, is cited as saying.

On February 16, one of the convoy’s organisers, Nicholas St. Louis, was caught on camera passing over an envelope with details for accessing CAD 8,000 worth of bitcoin to an anti-COVID-19 health mandate demonstrator.

The RCMP has refused to comment on the case, according to the news site, but it has published a statement citing its past successes in prosecuting crypto-related criminal activity.

“The RCMP normally uses a number of police processes, as well as coordinating with applicable law enforcement partners, as part of its capabilities and strategies to confront cyber crime and track criminal-related transactions,” the force stated.