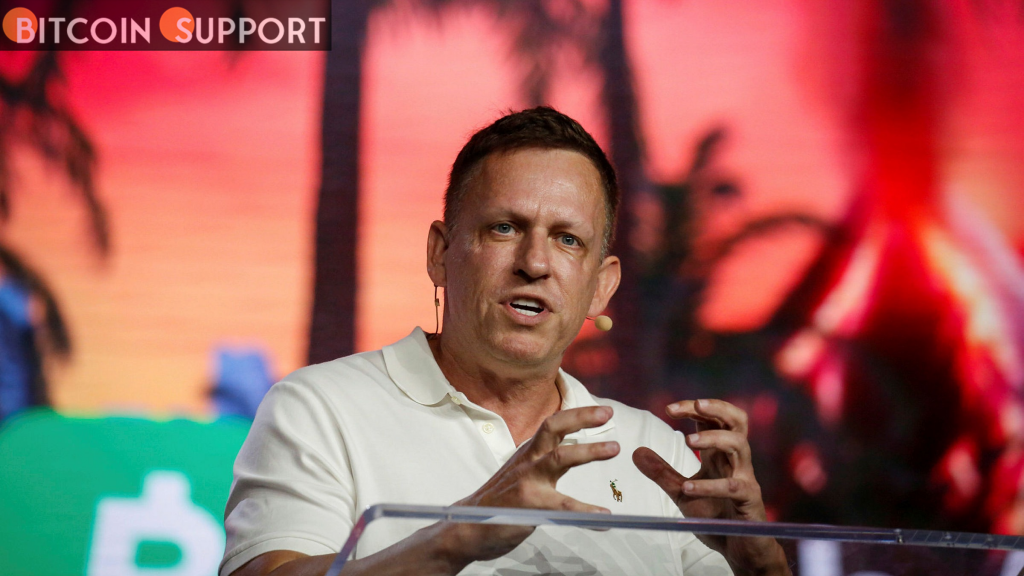 It should be noted that Buffett’s company invested $1 billion in a Brazilian cryptocurrency-focused digital bank.

It makes no difference if you’re a fellow billionaire; in Peter Thiel’s book, you either believe in the future of cryptocurrency or you’re a “enemy.” “Enemy number one: the sociopathic grandpa from Omaha,” Thiel, the billionaire PayPal cofounder and pro-Trump Republican megadonor, sneered at business magnate and Nebraska native Warren Buffett during a speech at a cryptocurrency conference in Miami this week. Thiel, whose current firm amassed a sizable Bitcoin fortune, also singled out JPMorgan Chase chairman Jamie Dimon and BlackRock CEO Larry Fink as “enemies” of Bitcoin, referring to Dimon, Fink, and Buffett as a trio of geriatric tyrants impeding progress. Thiel’s comments were his latest attempt to recast cryptocurrency as a right-wing cultural issue, hailing Bitcoin as a revolutionary conservative movement fighting “woke” corporations and the financial establishment.

The conference’s speaker lineup read like a who’s who of those vying for control of the crypto economy’s power center—an economy that rose to prominence in part due to its lack of a centralised or organising body. It featured Super Bowl champion Odell Beckham Jr., tennis superstar Serena Williams, and football player and newly minted anti-vax icon Aaron Rodgers, all of whom are among the plethora of celebrities who have embraced crypto—many of whom are being compensated to spread the word. Glenn Greenwald, a journalist, and Jordan Peterson, a leading figure in men’s rights, both made appearances at the convention for more ideological reasons. Greenwald lauded Bitcoin for advancing “freedom of speech and anti-imperialism” throughout the world during a Thursday panel, adding that both Donald Trump and Hillary Clinton view crypto technology as “so pernicious to the prevailing order” that they are united in opposing it. Meanwhile, Peterson used his conference appearance to characterise Bitcoin as capitalism’s next frontier, stating that “there are two justifications for free markets and capitalism.” It provides a non-destructive outlet for warlike individuals.”

Thiel pledged to “expose” his fellow billionaires who are perhaps more sceptical of crypto — though even those on Thiel’s list of so-called adversaries clearly see profit potential. “What I would call—what we have to think of as a revolutionary youth movement—is the finance gerontocracy that runs the country through whatever silly virtue-signaling-slash-hate-factory term like ESG [environmental, social, and governance].” “Their decision not to allocate to Bitcoin is a deeply political one, and we must push back against them.”

Peter Thiel at @TheBitcoinConf: "Bitcoin is the most honest and most efficient market in the world." pic.twitter.com/P2QnjBS1ga

Buffett drew the ire of crypto enthusiasts by dismissing Bitcoin as purely speculative “rat poison” with “no intrinsic value.” Buffett’s company, on the other hand, invested $1 billion in a Brazilian digital bank that specialises in cryptocurrency in February. Dimon referred to Bitcoin as a “fraudulent” and “worthless” asset. Bitcoin, according to Fink, is a “index of money laundering.” However, like Buffett, Fink is gradually warming to Bitcoin, stating in a March letter to shareholders that a “thoughtfully designed global digital payment system can improve the settlement of international transactions while reducing the risk of money laundering and corruption.” Even Dimon, who has previously refused to refer to digital coins as “currencies,” recently lauded Bitcoin’s blockchain technology in a letter to JPMorgan Chase shareholders. “There are numerous applications where a blockchain can be used to replace or improve contracts, data ownership, and other enhancements,” Dimon wrote in this week’s annual shareholder letter.

Thiel advised investors during his conference speech to abandon government-backed financial systems and jump on the crypto bandwagon if they want to survive the coming wave of global inflation. After acknowledging that cryptocurrency’s future is uncertain and difficult to predict, Thiel insisted that Bitcoin is “always the most honest and efficient market in the world.”