Panelists at the MENA Climate Week talk about changes in regulations, technology, and awareness and collaboration between the blockchain and climate communities.

Panelists at the recent MENA Climate Week 2022 talked about how blockchain technology can help green projects.

The event was organized by Dubai’s Ministry of Climate Change and Environment, the Dubai Electricity and Water Authority, and the World Green Economy Organization. It was also organized by the United Nations Environment Program and renewable energy groups.

In one session, a group of experts in both blockchain and climate action talked about how blockchain use cases can help make the world a better place in the Middle East and North Africa (MENA) and around the world during an event in Dubai, United Arab Emirates. 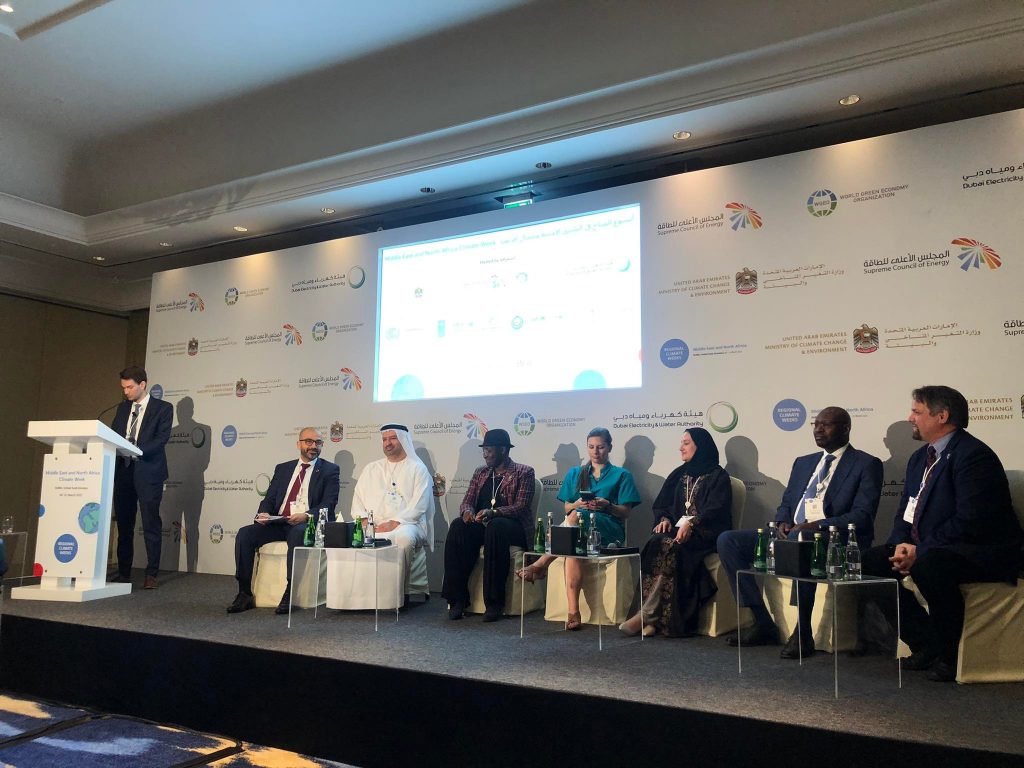 There are also climate activists from the UN Environment Program, the IAAI, and Replenish Earth, as well as representatives from the African Union and the European Union. The blockchain figures are joined by Sami Dimassi, Tia Kansara, Princess Abze Djigma of Burkina Faso, Dr. Miroslav Polzer, and Ameera Al Haranki, who is a youth climate action leader from the African Union Climate Change Task Force. Each person talked about what they know and what they think about how blockchain could be used in climate change projects.

Samuel Dimassi, UN Environment’s Regional Director and Representative for West Asia, made his remarks in the beginning of the meeting. He said that there are many ways to “tap into blockchain use” to help with climate action. He talked about changing policies, bringing new technology to the climate sector, and making people more aware and working together.

During today’s event on Transformative Climate Action through Digitalization at #MenaClimateWeek @samidimassi_UN highlighted the importance of Blockchain technology and their potential in relation to transparency, clean energy attribute, carbon markets and climate finance. pic.twitter.com/pj8JcLwUfc

Getting people to change their policies and government rules

Dimassi says that because there are a lot of problems with the climate in the world today, it’s important to have government regulations and policies that make it easier for people to use digital technologies like blockchain technology. He said that blockchain is just a technology, and it’s up to the people who use it what they do with it:

“Blockchain can improve efficiency and transparency in climate actions if it’s used in the right manner. Blockchain in itself is neither good nor bad for achieving climate targets. It depends on what we make of it.”

In his speech, he said that the case for digital transformation is very “compelling,” and that solutions like blockchain can be a great help because of their inherent abilities.

That’s not all: He also said that his organization, Dubai Blockchain Center, aims to help people in the United Arab Emirates understand how blockchain technology works. These discussions bring together regulators, educators, and community members to learn more about the technologies that make up blockchain. 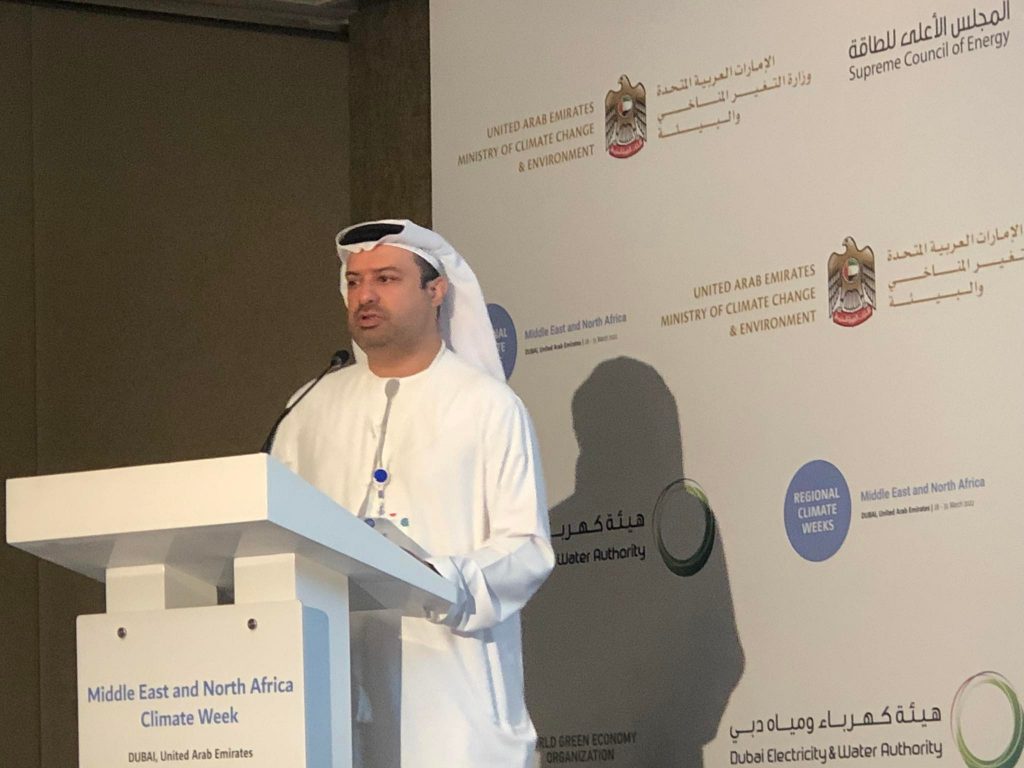 Thomason talked about how blockchain projects in the climate sector are bringing new technology to the field. According to Thomason, blockchain technology is already making a difference in the fight against climate change through green digital asset projects, smart grid management, nonfungible tokens and gamification, measurement and reporting, and the use of decentralized autonomous organizations for the fight against climate change. 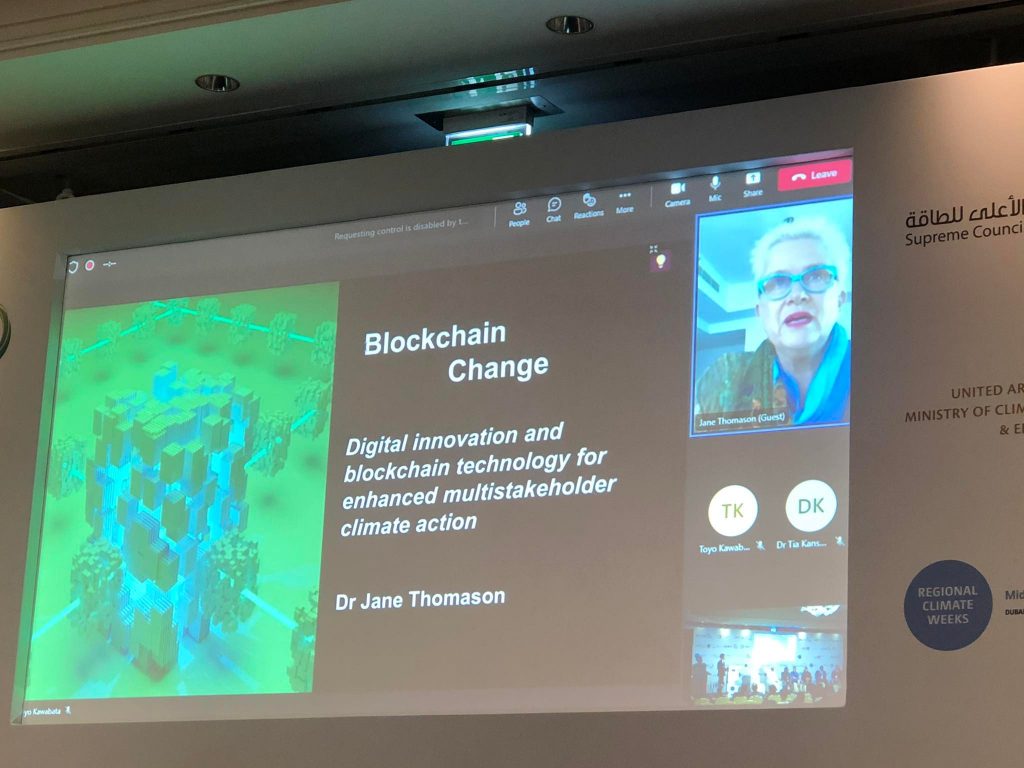 Thomason also said that blockchains can be used to make it easier to find environmental contributions and reward people who make them with tokens, which is one of the things that makes them transparent. She told us:

“Blockchains can automate measurement and remunerate those responsible for positive contributions to individual areas, which benefits the environment as a whole.”

“If we combine IoT for the production of data, blockchain for the transfer, artificial intelligence for the processing, and cloud computing with its almost infinite storage capacity, and quantum computing which can greatly increase the computing speed, we can build something very powerful.”

Increasing awareness and working together

Ameera Al Haranki, a Youth Climate Action Leader, said that taking action for climate empowerment is very important, and that raising awareness and working together in this field is very important. This is what the youth leader said: Even though she doesn’t claim to be an expert in blockchain, she said that the technology has “potential” to be used in climate action.

He said, “We need to get the youth and everyone in the society involved in climate action so we can learn more about what’s going on.” The youth leader said that in order to keep the future safe for the next generation, we need to give them the tools they need, like education, training, and public awareness.

Cointelegraph editor in chief Cornèr also said that the blockchain community isn’t just about being open and working together. According to her, this shows up in the many open-source tools that members of the community have made available.

“You can actually search for solutions and the quickest way to achieve them with different tools. And this is what the blockchain community is about. […] You can find open-source tools that are available for building your projects.”

He also said that the climate action community can learn about new terms and tools that can help them, as well as give voice to those who are working on climate change.