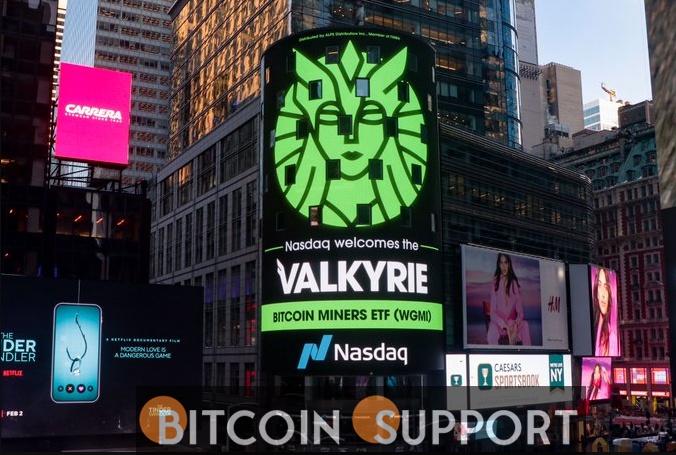 Bitcoin Miners ETF (WGMI) manager Valkyrie is betting significantly on publicly traded miners who rely mostly on renewable energy because it expects them to outperform their counterparts in the long run.

When compared to more traditional forms of energy like coal, Steven McClurg, the fund’s CIO, says “we believe that companies that focus on more renewable energy sources are going to win in the end.” This is because alternative energy sources like hydroelectric, solar, and natural gas can save miners money. According to him, “coal energy will cost a lot more in the future,” he said.

Mining businesses that use a large percentage of renewable energy have already taken the extra step compared to other programmes, such as carbon neutral commitments, and they tend to have reduced overhead expenses because renewable energy often costs less than other sources.”

Stocks of the Valkyrie Bitcoin Miners ETF began trading on the Nasdaq on Tuesday under the ticker “WGMI” and were up 0.8 percent at the time of writing. The fund has an expense ratio of 0.75%.

Bitcoin miners that generate at least 50% of their revenue from mining and rely mostly on renewable energy are eligible for investment in the fund’s 80 percent allocation. By comparison, mining companies in Valkyrie’s investment portfolio use 77% renewable energy, compared to the national average of only 31%. Its top five investments are Argo Blockchain, Bitfarms, Cleanspark, Hive Blockchain, and Stronghold Digital Mining. Each of these companies has an allocation of 8 percent to 10 percent (SDIG).

Investing in semiconductor businesses that help build mining rigs is also part of the fund’s portfolio. Nvidia (NVDA), Samsung Electronics (SSNLF), and Taiwan Semiconductor are a few of the companies we own (TSM).

Mining is still a lucrative business

There are also two additional Valkyrie ETFs that allow investors with both direct and indirect exposure to the bitcoin market. Investing in bitcoin futures is the primary focus of the Bitcoin Strategy ETF (BTF). Bitcoin-related public companies are the subject of the Balance Sheet Opportunities ETF (VBB), which debuted in December.

Miners employing alternative energy provide investors with exposure to not only an extremely profitable industry but also numerous breakthroughs in renewable energy utilisation, which is why another ETF for digital assets was decided upon. “Given the potential profitability and innovative things miners are doing on the renewable side,” McClurg said, “we believed it was a really excellent moment to enter this sector.”

However, according to an analyst at Wall Street investment bank DAA, mining remains very profitable with gross margins over 80%, even as the hash price, which measures the daily revenue per terahertz of mining computing power, has fallen to about $0.20 from its peak of $0.40 as crypto prices have fallen.

Despite this, a new poll from the Bitcoin Mining Council (BMC), a global forum of bitcoin mining companies and others in the industry, found that 66.1 percent of bitcoin miners are currently using a sustainable energy mix for their operations. Globally, the mining industry is expected to have a sustainable electricity mix of 58.5 percent in the fourth quarter of 2021, an increase of 1 percent from the third quarter, according to BMC.