Austin is preparing to become America’s next crypto hotspot with the passage of two resolutions promoting bitcoin and blockchain innovation.

Cities around the United States of America are competing to become the next hotbed of bitcoin and blockchain usage. Miami was the first city to approve its own portion of CityCoins last year, enabling it to launch its own cryptocurrency, dubbed “MiamiCoin,” for civic participation purposes.

New York City has also established a reputation as a crypto-friendly city through educational activities and Mayor Eric Adams’ payment in Bitcoin (BTC) in January of this year.

Recently, Austin — the state capital of Texas whose tagline is “Keep Austin Weird” — has demonstrated a tremendous interest in bitcoin and blockchain technologies. While Texas’ willingness to pioneer crypto innovation was established nearly a year ago when Governor Greg Abbott tweeted his support for a “crypto law proposal,” the city of Austin has taken additional steps to secure bitcoin acceptance for local services.

Count me in as a crypto law proposal supporter.

It is increasingly being used for transactions and is beginning to go mainstream as an investment. (Fidelity, etc. trying to get Bitcoin ETF).

Texas should lead on this like we did with a gold depository. https://t.co/1z25mtgnmu

According to Kelly, the resolution instructs the city manager to conduct a fact-finding study to ascertain what would be required for the city to accept Bitcoin or other cryptocurrency payments for municipal services:

“This is more of a feasibility study. We currently don’t have enough information as council members to know if we can accept crypto as payment for city services. We need to know more about this before we can decide. In doing so, there is security information we need to look at to see if this is even viable or if we can keep crypto on our books financially. We don’t know if we can bill it as an asset — that would prevent us from being able to accept crypto as payment. There’s also the financial stability of crypto as a whole, and if we can even accept it in that regard.” 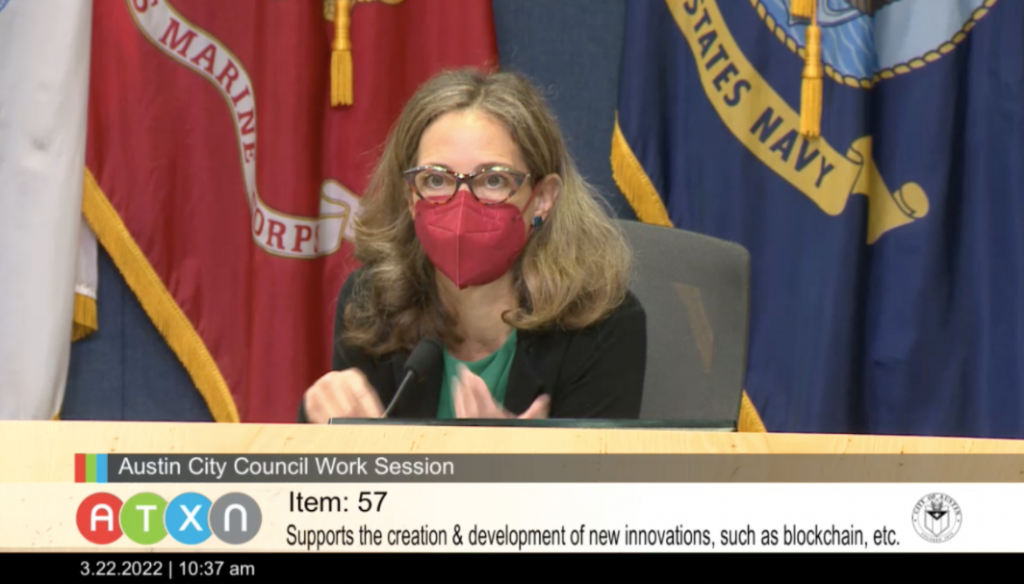 While issues persist, Kelly noted that Austin has always been a forward-thinking and innovative community, noting that many bitcoin investors now reside and work in the city. Kelly stated that Austin Mayor Steve Adler has endorsed her resolution as a co-sponsor. Kelly believes that with this backing, bitcoin payments would serve as a viable alternative for individuals to pay for some local services. She continued:

“If someone gets a speeding ticket, for example, and doesn’t have a bank account but has cryptocurrency, they could use crypto as payment. Or, if they wanted to pay their taxes or electric bills using Bitcoin or dedicate a park in their name using crypto. This is all part of the analysis for allowing the city of Austin to accept crypto payments.”

This might have a significant influence, as recent data from Finder.com indicates that 8% of Texans already own Bitcoin and that usage could reach 14% by the end of the year. Austin, in particular, could gain from cryptocurrency payments for municipal services, as Google data indicates that Austin is the most searched-for city in Texas for the keywords “Bitcoin” and “crypto.”

In light of this, it’s unsurprising that Kelly’s motion was adopted during Austin’s city council meeting on March 24. Kelly noted that now that the resolution has passed, the next stage for approval will occur in mid-June, when the Austin city manager may assess whether cryptocurrency can truly be accepted as payment. This will be determined by the city’s studies on financial stability, security, equity, and inclusion, as well as the benefits and hazards to consumers.

While both resolutions are novel, several members of the Austin city council expressed reservations throughout the meeting. Councilmember Leslie Pool stated that her primary problem with the use of blockchain technology is its “lack of a central authority.” Additionally, she stated:

“It may be tamper evident and tamper resistant, but that is all that it is. It’s a digital ledger. So there may be some unique uses for this or for the city to promote its use, but at this point, given its relatively recent entry into data storage or other digital arenas, I’m really cautious relating to the city diving into adopting or using it. I very much want to hear from our financial office staff or experts on these technologies before taking decisions to adopt these items.”

Regarding the cryptocurrency resolution put forth, council member Pool added:

“I continue to believe crypto is too volatile, a form of currency to risk tax payer dollars or employee retirements. Crypto is unregulated. It’s not just unregulated. It’s also unprotected. There’s an element for me of gaming involved here. That leaves me really uneasy. Crypto as a form of payment or investment is inconsistent with the role of a municipality in safeguarding the community’s revenue.”

Austin continues to grow, despite misgivings

Despite these reservations, Austin its remain optimistic about bitcoin and blockchain innovation in the city. For instance, Jesse Paterson, chair of the education committee at ATX DAO — an Austin-based chain-agnostic decentralized autonomous organization (DAO) — told Cointelegraph that the organization’s mission is to serve as a local resource for educating city council members and residents about the resolutions’ implications:

“Some ATX DAO members were at city hall showing our support for the resolutions, yet we still lent some caution because we are still in the early days of crypto. Therefore, it takes time to understand the space before diving into projects.”

DAO representatives @CrystalGravy2 @theSamPadilla and @realitycrafter showed up for today's Austin City Council Meeting to give public comment in support of resolutions 55 + 57.

ATX DAO is glad to offer support to any city projects or investigations into the web3 space. pic.twitter.com/8zzIEQVyNz

Ryan Harvey, community manager for the ATX DAO and a long-time Austin resident, adding that based on the language of both Council Member Kelly’s crypto resolution and Mayor Adler’s blockchain resolution, it’s clear that these are still fact-finding missions. He did, however, note that this is a start in the right direction:

“New information is always a good thing. But, even beyond fact-finding, both resolutions show that Austin is open for business and encourages innovation, which is fantastic.”

Harvey took a few minutes during the March 24 council meeting to share his opinions with city council members. “There are organizations here in town, such as ATX DAO — and I was pleased to see DAOs included in the resolution,” he remarked. 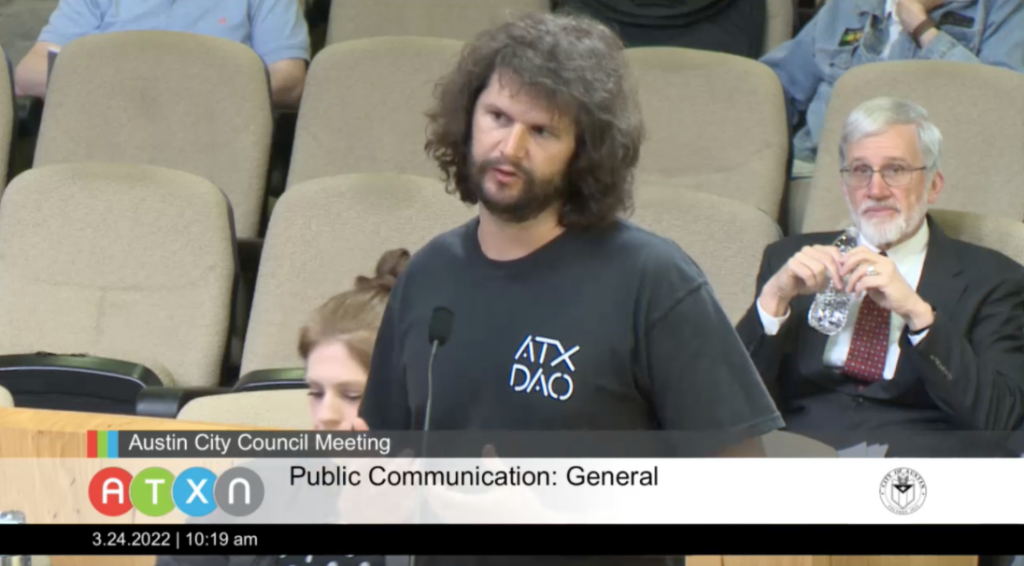 Along with the ATX DAO’s efforts, additional Austinites are launching initiatives combining crypto and Web3 components to give back to the community. For instance, City Magic is a project that aims to connect neighborhoods in Austin through nonfungible token donations (NFTs).

According to City Magic founder Raffi Sapire, the project gives $1,000 scholarships to members of the Austin community who wish to establish a welcoming space or event for neighbors or to engage in civic participation. “City Magic is geared toward civic-minded individuals and those who care about their town. Additionally, it serves as a bridge for individuals who have never engaged with tokens previously. Grants are not-for-profit organizations, and joining our committee costs the same as one grant that benefits civic involvement.”

Adler recently expressed his support for Sapire and other Austin-based blockchain entrepreneurs and firms in a tweet that said, “Austin is delighted to support the businesses and innovations that will bring the promises of Web3, cryptocurrency, and blockchain technology to life.”

Additionally, Austin may soon join Miami and New York City in establishing its own CityCoin. A member of the CityCoin community discussed how this might play out during a presentation at ETH Austin, a two-day event held during South By Southwest. According to the community member, CityCoins’ primary objective is to collaborate with the city of Austin in order to enable officials such as Mayor Adler and council member Kelly better understand how Austin’s own cryptocurrency might succeed. “We need to define this and ensure that we do so correctly before we proceed. We’d like to make an announcement about this during Consensus 2022, which is scheduled for June 9.” 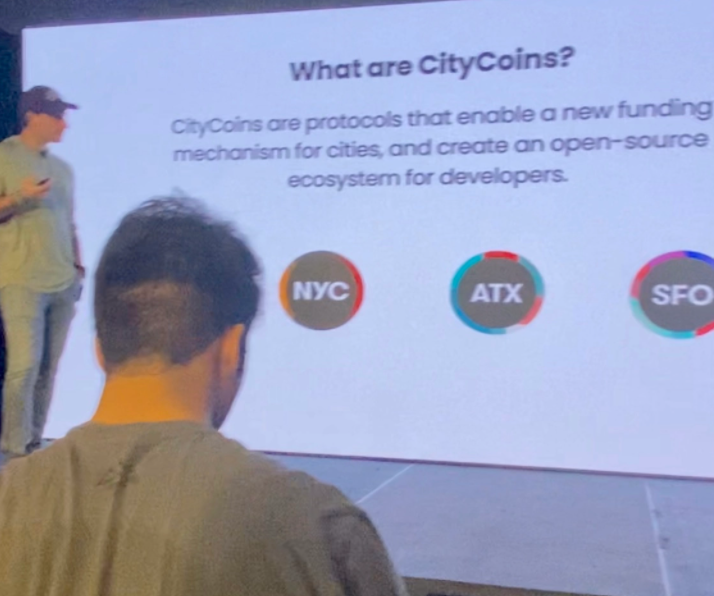 When asked about the possibility of implementing a CityCoin in Austin, Kelly stated, “I’m open to the idea, but my financial conclusion is contingent on my resolution passing and the city of Austin accepting crypto in general.”