Investors View Bitcoin as an Inflation Hedge, According to a Nickel Digital Survey 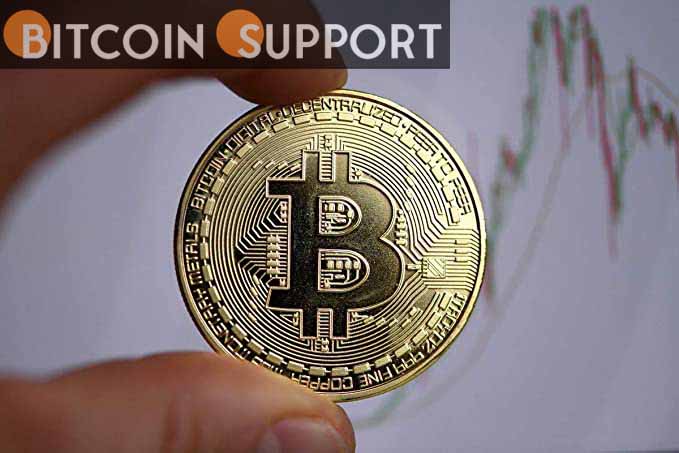 The latest cryptocurrency market movements in context of March 7, 2022.

This morning’s events include the following:

Market Movements: Macroeconomic considerations continue to exert pressure on bitcoin. The weekly chart is a beacon of hope for bruised bulls.

Featured stories include: According to a hedge fund poll, professional investors view bitcoin as an inflation hedge.

Gold rallied above $2,000 per ounce for the first time since August 2020 in response. However, bitcoin, which is frequently referred to as digital gold, plummeted below $38,000 early Monday.

While the cryptocurrency has now recovered to $38,700 in tandem with a rise in S&P 500 futures, values remain significantly lower than last week’s highs above $45,000.

“The decline [from the previous week’s high] is being driven by macroeconomic concerns,” Quinn Thompson, head of growth at blockchain-based institutional capital marketplace Maple Finance, told. “Global commodity prices are reaching all-time highs (partly due to supply chain concerns, partly due to fiat debasement), putting a strain on consumers.”

“Because prior economic slowdowns occurred in low inflation environments, central banks face a different challenge this time around and may be unable to assist the economy with more monetary stimulus,” Quinn Thompson noted.

While money markets have lowered expectations for Federal Reserve (Fed) rate hikes in the aftermath of the Russia-Ukraine conflict, the central bank is still expected to raise rates at least five times this year. The first rate hike of 25 basis points is expected next week.

In other words, the Fed put — the belief that the central bank will intervene if asset prices fall – appears to have run its course. Nonetheless, developing economies and European countries, which are likely to bear the brunt of the Russia-Ukraine spat, may maintain supportive monetary policy, so supporting bitcoin and asset prices in general.

“I expect that global growth predictions for 2022 will need to be drastically revised downward, and it will be intriguing to see what the world’s central banks do. Europe and Asia, I believe, will put an end to notions of monetary policy normalisation, and with Europe at the forefront, I can’t blame them “According to an email from Jeffrey Halley, senior market analyst for Asia Pacific at OANDA.

Bitcoin increased by more than 14% to about $45,000 on Feb. 28, breaking from lingering volatility in stock markets and posting its largest single-day percentage rise in over a year. The increase was allegedly fueled by hopes that Russians and Ukrainians would invest in crypto in order to hedge against rising volatility in their fiat currencies.

“Last week’s relief rally was sparked by the prospect of Russia (and others) becoming significant buyers of BTC as an alternative reserve asset following the world’s unified decision to decouple a country from the global monetary system almost overnight,” Maple Finance’s Thompson explained.

While the cryptocurrency has reversed its recent rally, it has been more resilient than traditional markets since Russia invaded Ukraine on Feb. 25, according to Coinbase. “On February 25, Bitcoin’s $34,400 support level was challenged twice and rose both times, showing significant purchase interest around that price,” Coinbase’s February assessment published last week stated.

According to technical indicators, the cryptocurrency may be approaching a turning point. 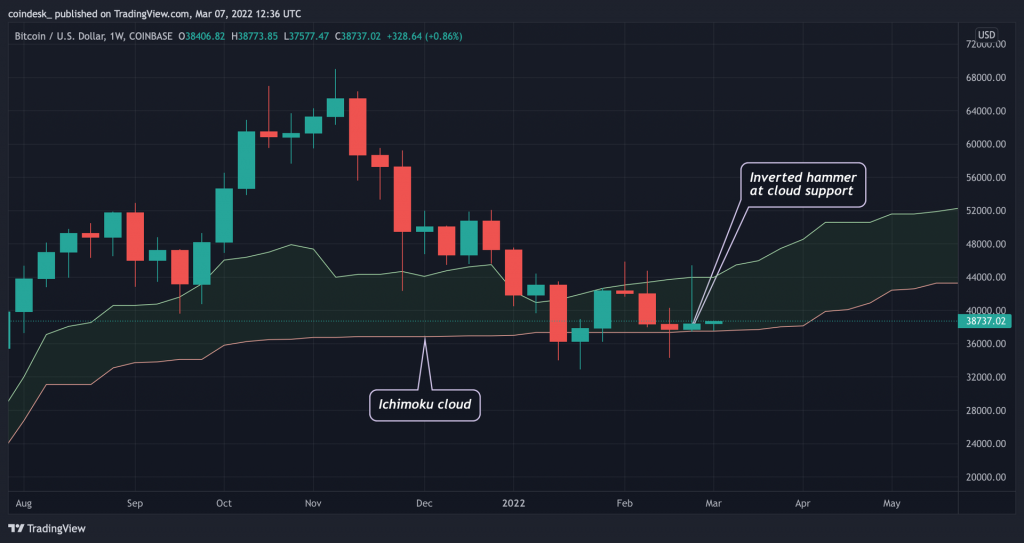 Bitcoin created an inverted hammer candle at the Ichimoku cloud support last week, according to the weekly price chart.

A long upper wick and a small body characterise the candlestick pattern. The occurrence of the candlestick following a prolonged bear run or at significant lows frequently suggests a bullish reversal.