Hyundai joins with Meta Kongz, Activision conducts a survey on NFTs, and more 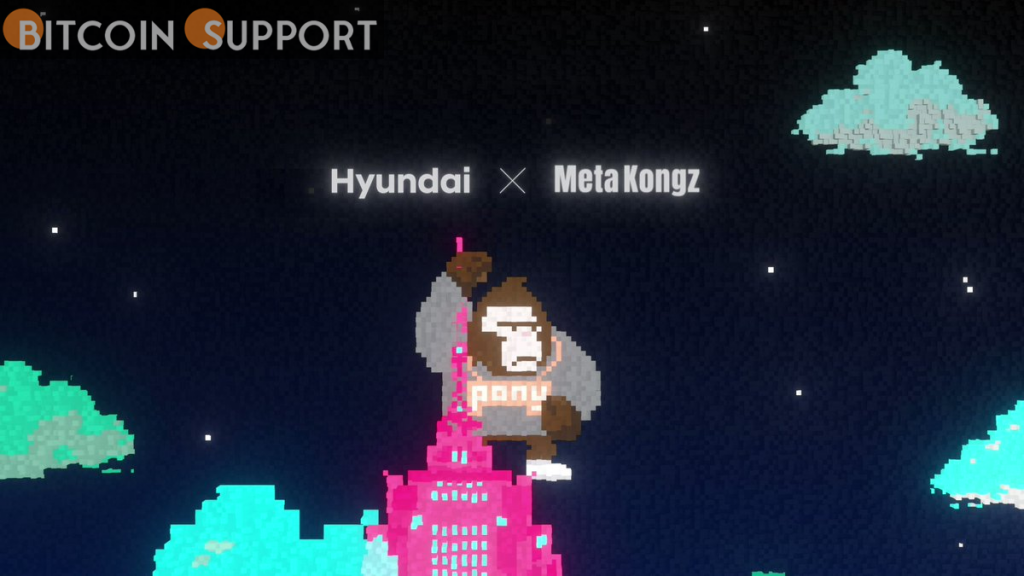 Hyundai also hinted at a hypothetical Metaverse, along with its previous concept of robots bridging the real and virtual worlds to improve mobility.

Hyundai Motor Company of South Korea stated today, April 18th, that it has joined with the Meta Kongz NFT project to launch a limited collection of 30 NFTs in May 2022.

Hyundai also launched a new Twitter account, @Hyundai NFT, for NFT-related messaging, and shared a video of an animated Meta Kong travelling through space in a 1975 Hyundai PONY.

A teaser for a subsequent “Shooting Star NFT” was included in the announcement, with the enigmatic explanation that it is a “ticket to a whole new world” and may result in “new NFTs.”

Hyundai unveiled its “Metamobility” concept in January, a vision for robots to act as a bridge between the actual world and the Metaverse, reflecting changes users make in the Metaverse in reality and enabling “humans to overcome physical restrictions of movement in time and space.”

Hyundai declared as part of its concept vision:

“With the metaverse on track to become a daily area for people in the future, the company anticipates the creation of a new sort of metaverse platform in which the line between virtual and physical reality may blur, thus eradicating the concept of virtual reality as we know it now.”

Hyundai expanded on this notion by issuing multiple NFTs as mobility vehicles, implying a possible “Hyundai Metamobility world” or metaverse.

Activision Blizzard recently surveyed its game players to gauge their interest in NFTs, as well as their thoughts on play-to-earn and Metaverse games.

So it seems Blizzard/Activision is trying to see if players are interested in crypto and n.f*t in games. I got a survey from them and it is on the survey. I said very disinterested to them. pic.twitter.com/dIT4bVokDK

Microsoft purchased Activision Blizzard for $69 billion in January, asserting that the transaction would “supply building blocks for the Metaverse.” Microsoft CEO and chairman Satya Nadella stated that gaming will play a “critical role” in establishing metaverse platforms.

Trials of health data as NFTs

On April 16th, HashCash Consultants announced a partnership with an undisclosed UK-based company to develop NFTs that incorporate information about an individual’s health.

The firms will engage with volunteers who will supply their health data with the objective of converting it to an NFT that can be shared with healthcare professionals, a move that the company claims will enable the owner to more easily track and monetize it.

The release illustrated how this form of NFT may be tracked and monetized by comparing it to the sale of user data by a DNA testing kit company to a research firm. Raj Chowdhury, Founder and CEO of HashCash Consultants, explained:

“If your genetic data is converted to NFTs and the information is then embedded with a tracking feature, you can watch where your data ends up, track who owns the NFT, and also determine if it is being used without your consent.”

Texas and Alabama securities authorities have issued emergency cease and desist orders against Sand Vegas Casino Club for illegally issuing over 11,000 NFTs to raise capital for its Metaverse-based casinos.

Animoca Brands, the parent firm of The Sandbox metaverse, has expanded its portfolio of video game publishers, strengthening both its motorsport and role-playing blockchain games.

Meanwhile, Louis Vuitton is advancing its Web3 strategy with the addition of additional NFTs to its mobile game “Louis: The Game.” The fashion label updated its app with additional levels and incentives, including a random award of ten new “profile image” tokens.