Ethereum’s price has remained stable inside a narrow price range, but the network’s address count looks to be expanding.

The Ethereum network appears to be generating the necessary activity for a price rebound. However, Ethereum has yet to see a sustained increase in the number of new addresses to support the bullish narrative.

Consolidation of Ethereum Ahead of the Merger

Ethereum is currently trading in a narrow range between $2,500 and $3,000, with little indication of its future direction.

The market capitalization of the second-largest cryptocurrency remains stable, although activity on its network continues to wane. Network expansion is frequently regarded as a highly accurate price predictor. By and large, a gradual drop in the quantity of new addresses issued on a particular blockchain results in falling values over time, and vice versa.

According to Glassnode’s on-chain analytics, the number of new Ethereum addresses joining the network on a daily basis has decreased significantly since November 2021, when prices peaked. The number of newly created addresses peaked at 193,000 on Oct. 28, 2021, and peaked at 70,600 on Feb. 24.

While the number of new addresses created on a daily basis appears to be recovering, hovering around 86,000 at press time, there is still no evident trend reversal. A fresh daily high of 93,000 new addresses could herald the start of a new upsurge.

While anticipation over Ethereum’s planned conversion to Proof-of-Stake consensus, colloquially referred to as “the merge,” may help ETH rally, a fresh uptrend would almost certainly require a surge in network growth. The merger is scheduled to launch in Q2, but the exact date has not been announced. 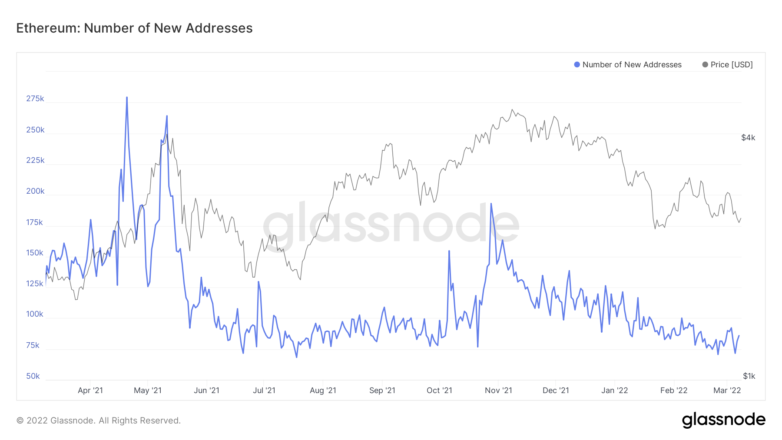 If prices surged in anticipation of Ethereum’s long-awaited protocol upgrade, the most significant concentration of ETH was acquired at an average price of $3,100. According to IntoTheBlock’s Global In/Out of the Money model, about 4.4 million addresses already purchased 19.25 million ETH at this price.

Only a decisive daily candlestick close over the massive supply wall at $3,100 is likely to result in the uptrend resuming.

It’s worth noting that the $2,160 support level is now performing as a firm floor, preventing ETH from incurring any losses. Although it is realistic to expect that it will maintain above this price point, any symptoms of weakness at $2,160 might result in a decline below $1,800 or perhaps $1,400 in order to create a market bottom.