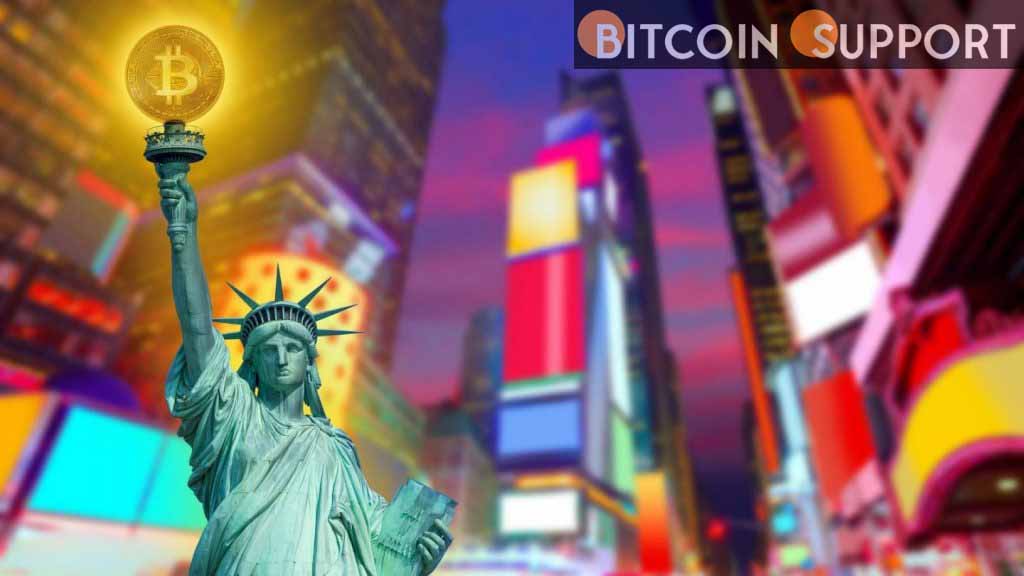 Etoro and Blockchain.com are spending $100,000 per month to court legislators.

New York is attempting to establish itself as the “crypto capital” of the United States. Major cryptocurrency companies have hired armies of lobbyists to try to influence the outcome.

According to new filings, Digital Currency Group, Blockchain.com, and a dozen other firms are spending up to $100,000 per month in a $1.5 million Albany lobbying blitz to help write the rules governing the $2 billion crypto industry, which is largely unregulated at the federal level.

Even firms that do not yet operate in New York, such as eToro, are expanding their presence in Albany because laws enacted there may have an impact on legislation across the country.

New York has some of the toughest financial watchdogs in the world, and crypto companies are aware of the lessons learned by technology companies such as Airbnb Inc. and Uber Technologies Inc., which have fought New York regulators in the past. They’re also aware of New York’s already onerous crypto licensing requirements, and they’re concerned that states with fewer regulations, such as Texas, will entice companies to relocate there instead.

“We have to have a seat at the table” on New York’s cutthroat political stage, said Lane Kasselman, chief business officer at crypto trading platform Blockchain.com.

This is especially important as New York and other states ramp up efforts to write new crypto rules, according to Kasselman, who noted that 96 bills were introduced in the United States in the first six weeks of 2022, among the crypto legislation tracked by Blockchain.com. “There were 13 bills introduced in the United States related to cryptocurrency in 2021,” Kasselman said.

New York lawmakers are openly embracing cryptocurrency technology as a means of boosting an economy still reeling from the pandemic and Wall Street’s shrinking footprint. “Does New York want to be the centre of the next great financial system, or does it want to cede that position to Miami or San Francisco?” According to Kasselman. “What’s on the line?” “The brightest and best are leaving.” 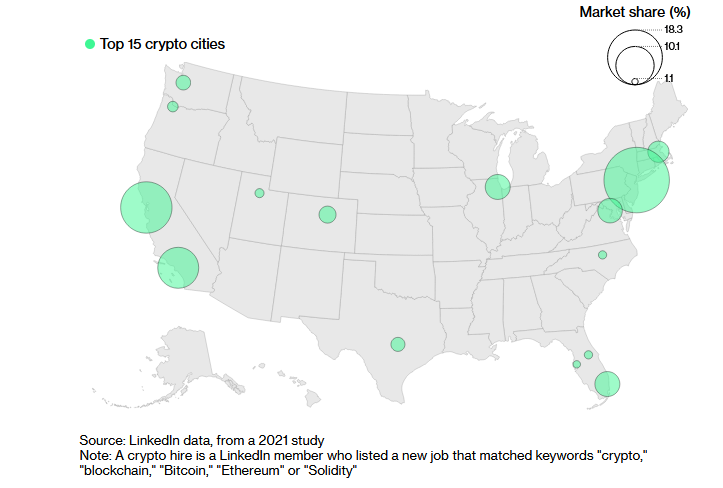 In the Driver’s Seat… for Currently, New York and San Francisco have the highest concentrations of crypto specialist jobs, but other hubs are sprouting up.

New York City Mayor Eric Adams, who declared before taking office in January 2022 that he would accept his first three paychecks in cryptocurrency, has staked a claim to make the city “the center of the cryptocurrency industry.” Adams has since partied with crypto billionaire and Galaxy Investments CEO Mike Novogratz and taken a ride to Puerto Rico on crypto entrepreneur Brock Pierce’s private jet. He’s spoken at industry meet-ups and explained the complexities of Ethereum and Bitcoin.

The energy has spread like wildfire. “There has been so much investment, activity, and scrutiny in the industry recently that a lot of firms are realizing it’s time to get off the sidelines,” said Eric Soufer, who launched Tusk Strategies’ new fintech and cryptocurrency lobbying practice in January.

Tusk Strategies also represented Uber when the car-sharing service launched in New York City in 2011, and Soufer sees similarities: “If you want to shape the trajectory of crypto regulation not just at the state level, but also at the federal level, you must engage and demystify the space.”

There has been little indication of New York Governor Kathy Hochul’s position on cryptocurrency, whether it is front-office cryptocurrency operations or bitcoin mining. One potential bright spot, according to crypto businesses, is Adrienne Harris, a former Obama Administration official named by Hochul as the state’s new superintendent of the Department of Financial Services, New York’s top regulator for the industry. Harris served on the board of the Digital Dollar Foundation, a group that advocates for a digital currency issued by the United States’ central bank.

So far, most of the focus in Albany has been on the environmental impact of bitcoin mining, an energy-intensive, loosely regulated practice that has exploded on American soil since China’s 2021 crypto-mining ban.

New York’s Department of Environmental Conservation is expected to issue a key decision in March on whether to continue to allow mining operations at the formerly decommissioned power plant operated by Greenidge Generation Holdings Inc. in a closely watched case seen as a bellwether for how strictly the state might regulate crypto mining. 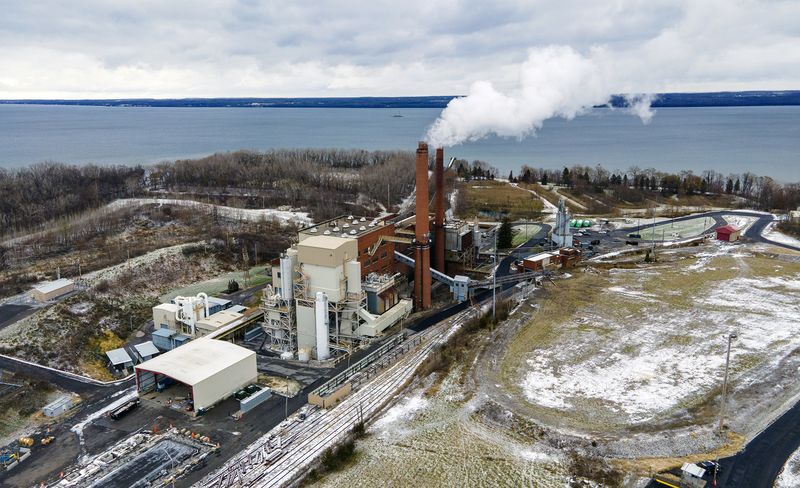 Greenidge, located on Seneca Lake in New York’s Finger Lakes region, is a coal power plant purchased by private equity firm Atlas Holdings LLC and converted to a natural gas-burning plant. By 2020, it had evolved into a 24-hour Bitcoin mining operation. The plant has applied to renew its air-emissions permit, and environmental activists as well as the cryptocurrency industry have been keeping an eye on the public debate.

According to Yvonne Taylor, vice president of Seneca Lake Guardian, an environmental activist group, this “relatively new, little understood industry is destroying our climate because it is so energy intensive.” “Outside speculators are flocking to New York because it’s like the Wild West here, with no oversight,” she explained.

There has also been extensive lobbying on legislation that would impose a statewide moratorium on all crypto-mining operations, as well as more than 20 bills related to the industry introduced as of mid-February on topics ranging from fraud to the use of blockchain technology in elections. In total, 16 crypto-related bills were introduced in New York in 2021.

In a sign of the schism in political support, Mayor Adams declared this month in front of state lawmakers, “I support cryptocurrency, not crypto mining.” Businesses that do not have direct mining operations are concerned that mining conflicts will spill over into other areas of the business, such as trading and other front-office operations.

“Mining consumes all of the oxygen, and mining defines crypto,” said Soufer of Tusk Strategies.

Outside of mining, crypto businesses say they see their lobbying efforts as a pre-emptive strike. “It is for us to be involved as regulation continues to be developed and created,” said Lule Demmissie, CEO of eToro USA, an Israel-based company set to go public via a SPAC merger with Betsy Cohen-backed FinTech Acquisition Corp. V.

It’s also a way to avoid what happened to Facebook and Google, where televised congressional hearings revealed lawmakers baffled by some of the most basic tech jargon.

“The technology is difficult,” said Dan Burstein, general counsel for the United States at Paxos, a regulated blockchain infrastructure platform. One way to influence future legislation is to educate politicians and policymakers about cryptocurrency. It’s also a way for them to ensure that their businesses aren’t inadvertently entangled in legislation if the language used to craft bills isn’t precise enough.

“They see what’s in the market now, but not what’s coming, and they may not be thinking about future financial system risks,” Burstein said.

Some companies, for example, have hired lobbyists to advocate for changes to New York’s BitLicense, which was established in 2014 and regulates crypto companies that reside in — or have customers in — the state. Some businesses want the state to relax licensing requirements to make it easier for smaller cryptocurrency businesses to comply.

Without a BitLicense, exchanges are not permitted to operate in New York, and only licenced companies are permitted to offer certain approved coins in the state. For example, roughly half of the 157 coins supported by Coinbase are not available for trading in New York.

“It takes a while to get on those exchanges if you’re a younger, newer cryptocurrency project,” said Gene Hoffman, chief operating officer at Chia Network, a blockchain network founded by BitTorrent creator Bram Cohen. The crypto industry is “radically different” now than it was when the BitLicense was created, and “it’s time to take a fresh look and modify it,” Hoffman said.