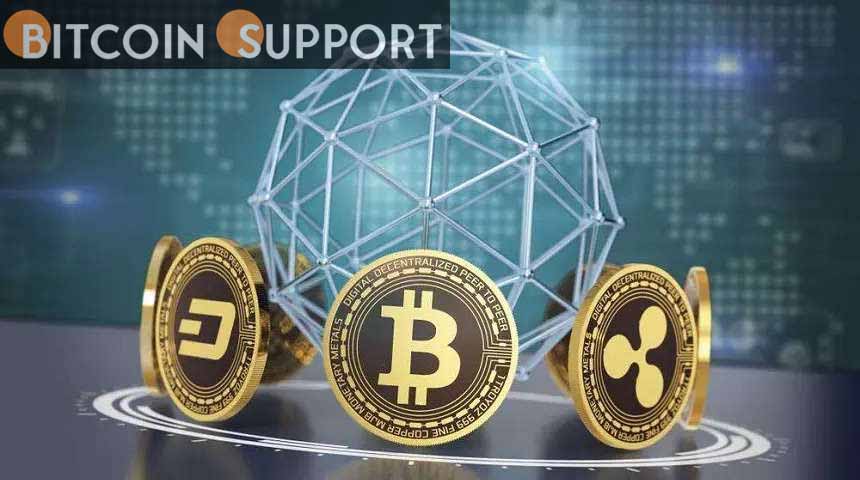 Now that the brief consolidation phase in BTC and altcoins appears to have passed, bulls have set their sights on fresh highs.

Bitcoin (BTC) has recovered much of its January losses, and traders’ attention now goes to April, which has historically been a strong month for the cryptocurrency. Bitcoin has only completed April in the red three times, according to Coinglass data, with the largest monthly loss being a 3.46 percent decrease in 2015.

Despite the fact that history favours the bulls, the Whale Shadows indicator has detected that over 11,000 Bitcoin has been removed from a wallet where it had been idle for seven to 10 years. According to independent ma analyst Phillip Swift, the migration of similar-sized volumes from dormant accounts has typically resulted in a significant top. 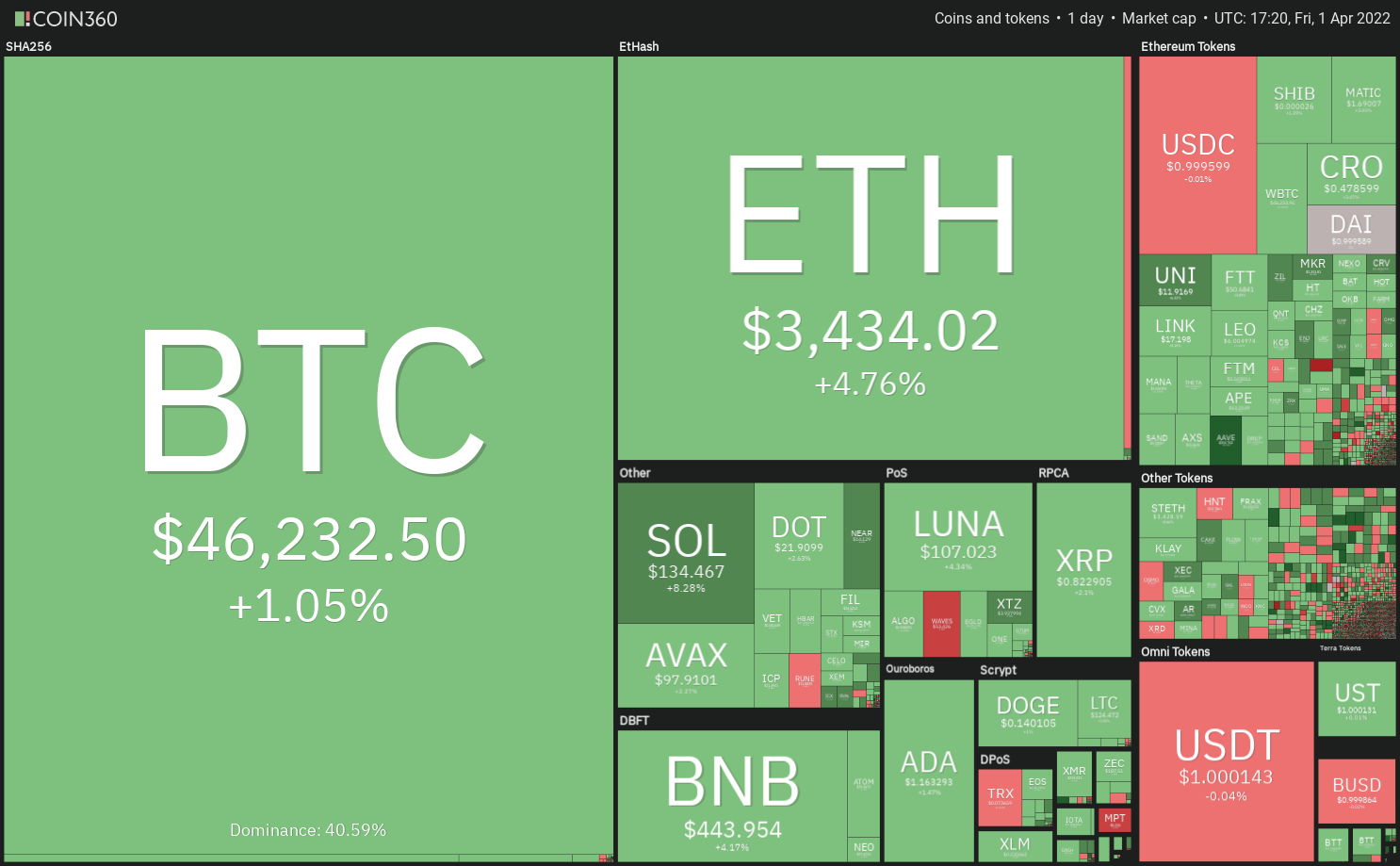 Traders should keep an eye on the crypto markets as well as the performance of the US stock markets for indications, as Bitcoin has been strongly associated with the equity markets for several weeks.

Could bulls break through the overhead resistance in Bitcoin and a few other altcoins, extending the remarkable comeback from the lows? Let’s look at the charts of the top ten cryptocurrencies to see what we can learn. 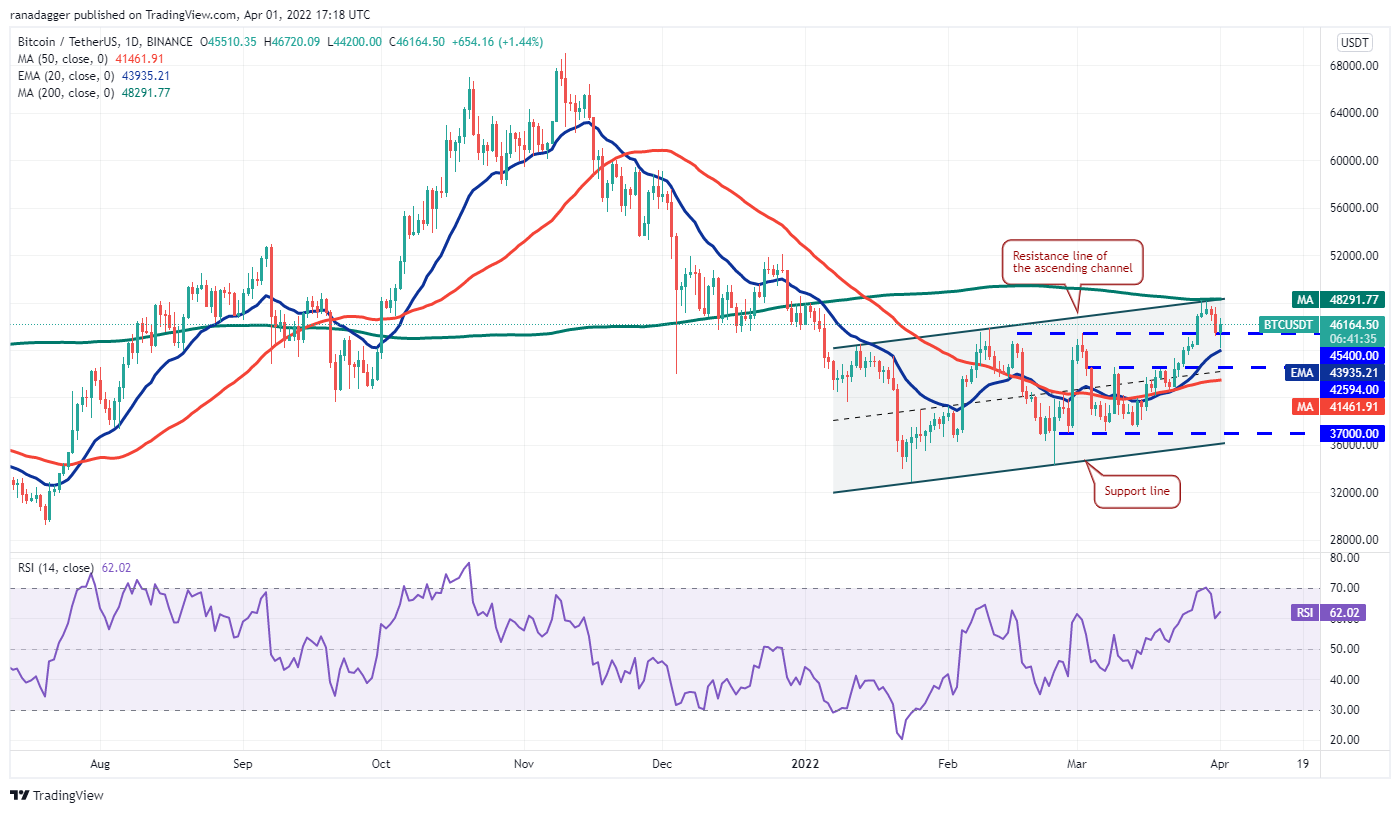 The bulls will aim to drive the price over the 200-day SMA once more. If they succeed, the BTC/USDT pair might surge to $52,000, where the bears could mount another major resistance.

Alternatively, if the market falls below the 200-day SMA once more, it will indicate that bears have established a firm barrier at this level. For a few days, the pair could stabilise between the 20-day EMA and the 200-day SMA.

The bullish momentum has decreased if the 20-day EMA is broken and closed below it. This might cause the price to drop to the 50-day SMA ($41,461).

On March 29, Ether (ETH) fell below the 200-day SMA ($3,488), but the short correction and quick recovery suggest solid demand at lower levels. 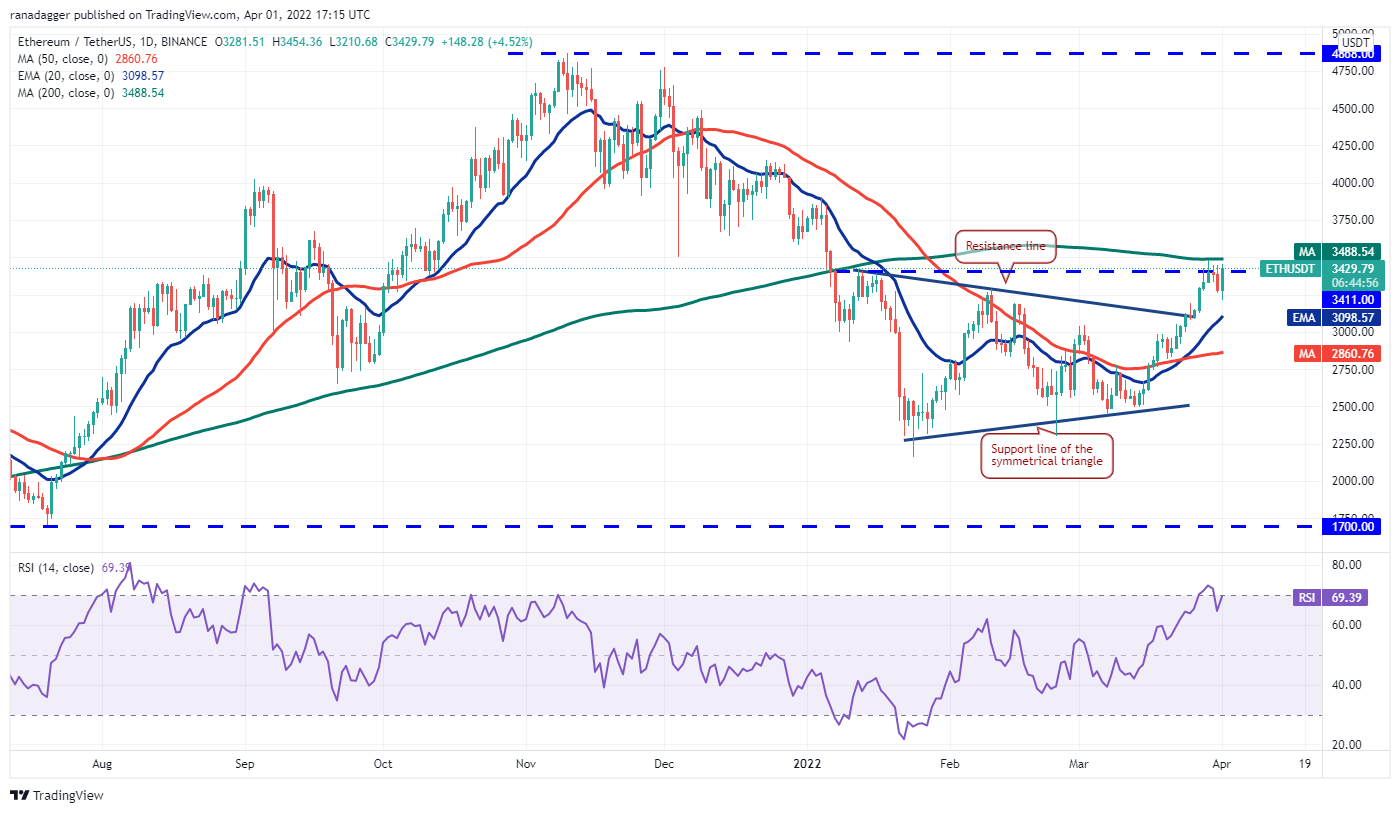 Bulls are in charge, as seen by the rising 20-day EMA ($3,098) and the relative strength index (RSI) nearing the overbought zone.

The bullish momentum could pick up even more if buyers push the price over the 200-day SMA, and the ETH/USDT pair could climb to the psychological milestone of $4,000.

In contrast to this idea, if the price continues to fall from the above resistance, it indicates that the bears are not willing to give up. The bears will then attempt to drag the pair below the 20-day moving average. The pair might drop to the 50-day SMA ($2,860) if they succeed.

On March 30 and 31, Binance Coin (BNB) broke through the $445 overhead resistance, but the bulls were unable to maintain the gains. 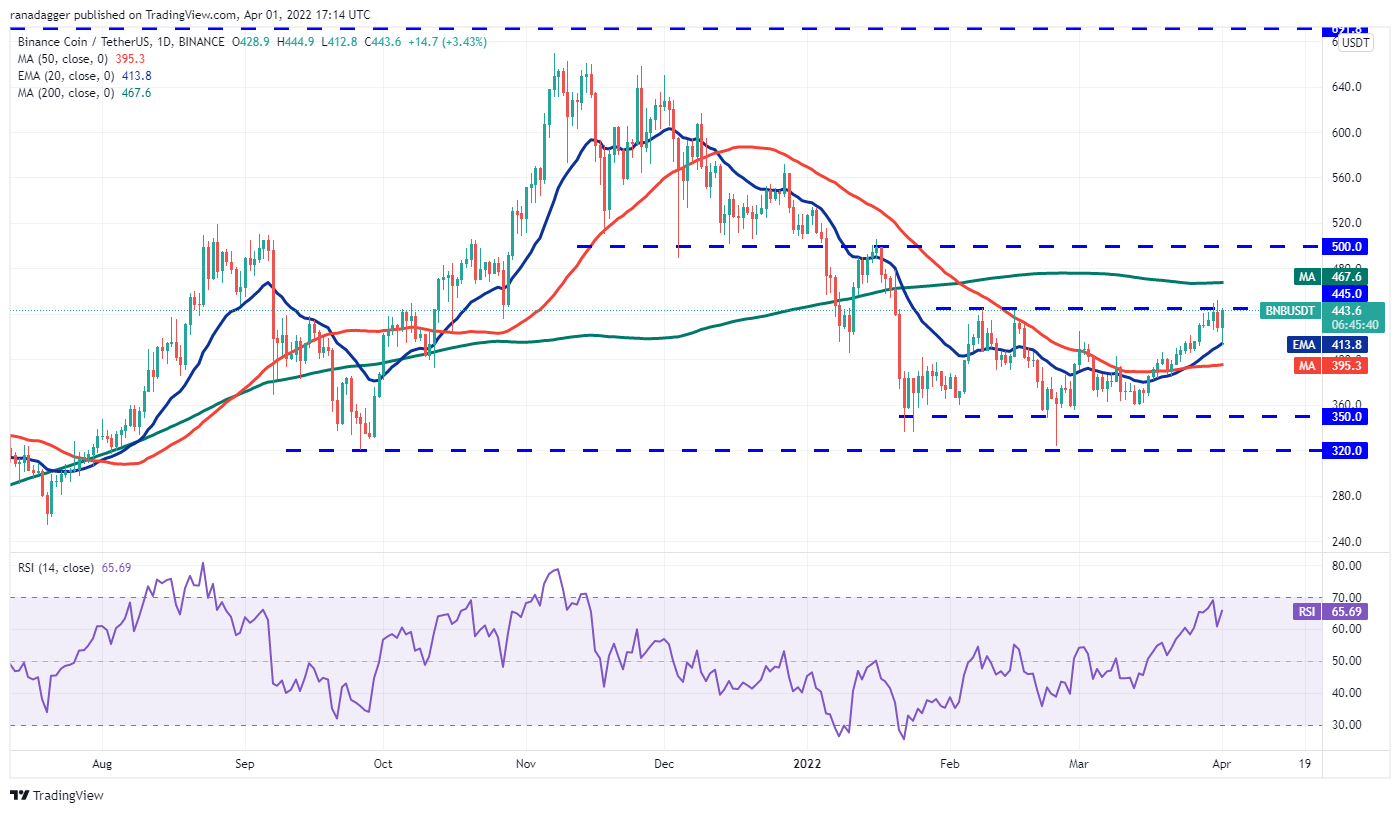 The bears today dragged the price near the 20-day EMA ($413), but the quick rebound signals substantial bullish buying at lower levels.

The BNB/USDT pair might advance to the 200-day SMA ($467) and then make a sprint for the psychological threshold of $500 if bulls push and sustain the price over $445.

If the price drops below the moving averages and turns down from its current level, this bullish view will be invalidated in the short run. For a few more days, the pair could remain range-bound between $350 and $445.

Near the important level of $122, Solana (SOL) had been experiencing a fierce battle between bulls and bears. The March 31 candlestick’s extended wick signalled selling at higher levels, but the bears were unable to keep the price below $122 today. 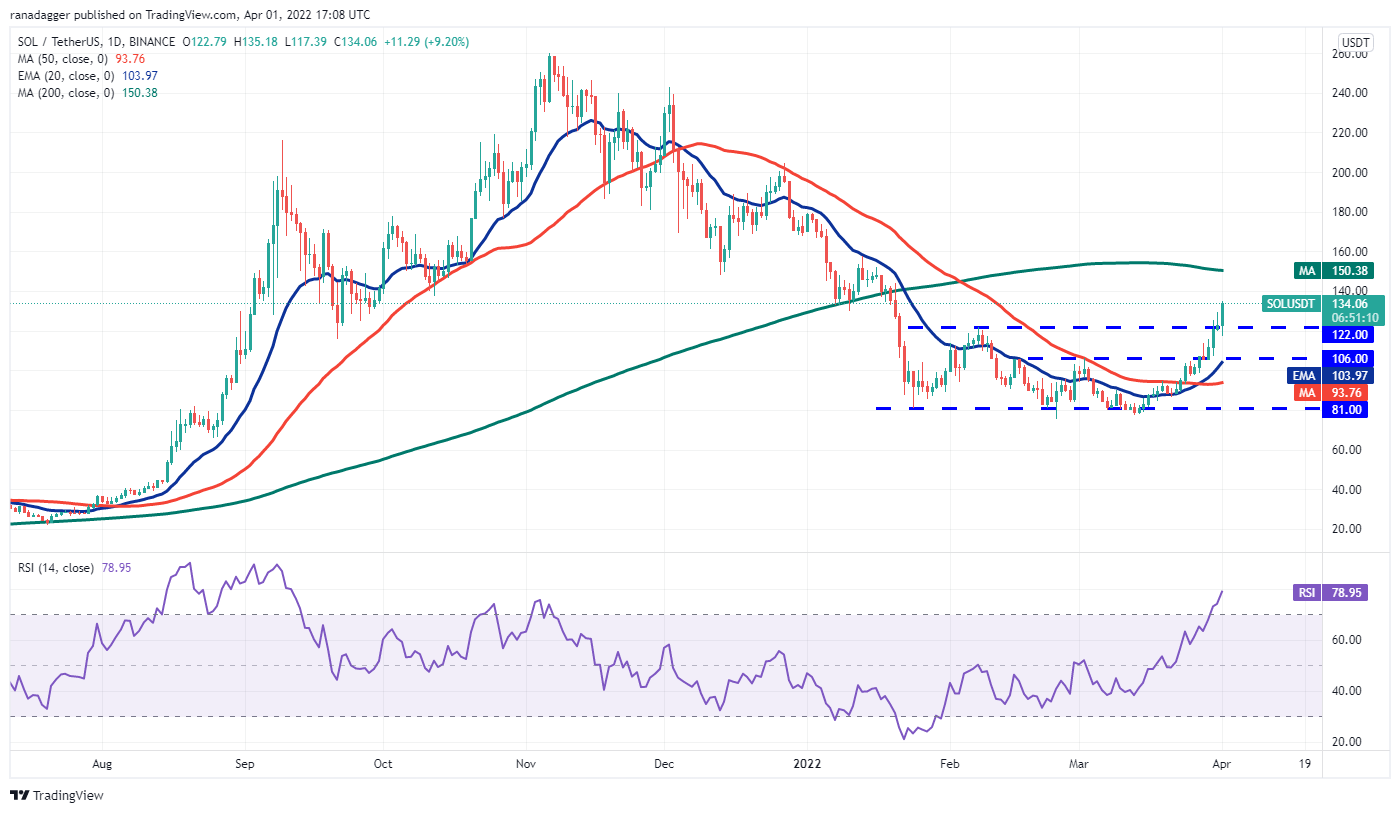 This shows that the bulls pounced on the slight pullback. The price has moved over the overhead resistance level of $122, marking the commencement of a fresh upswing.

The SOL/USDT pair may now attempt to break beyond the 200-day SMA ($150). If bulls can break over this resistance, the next target might be $163.

In contrast, if the price does not stay above $122, it indicates that demand has dried up at greater levels. The pair could then drop to the 20-day exponential moving average ($103).

On March 30, Ripple (XRP) developed an inside-day candlestick pattern, which resolved in favour of the bears with a violent downmove on March 31. This indicates that buyers who may have purchased at lower levels aggressively closed their positions. 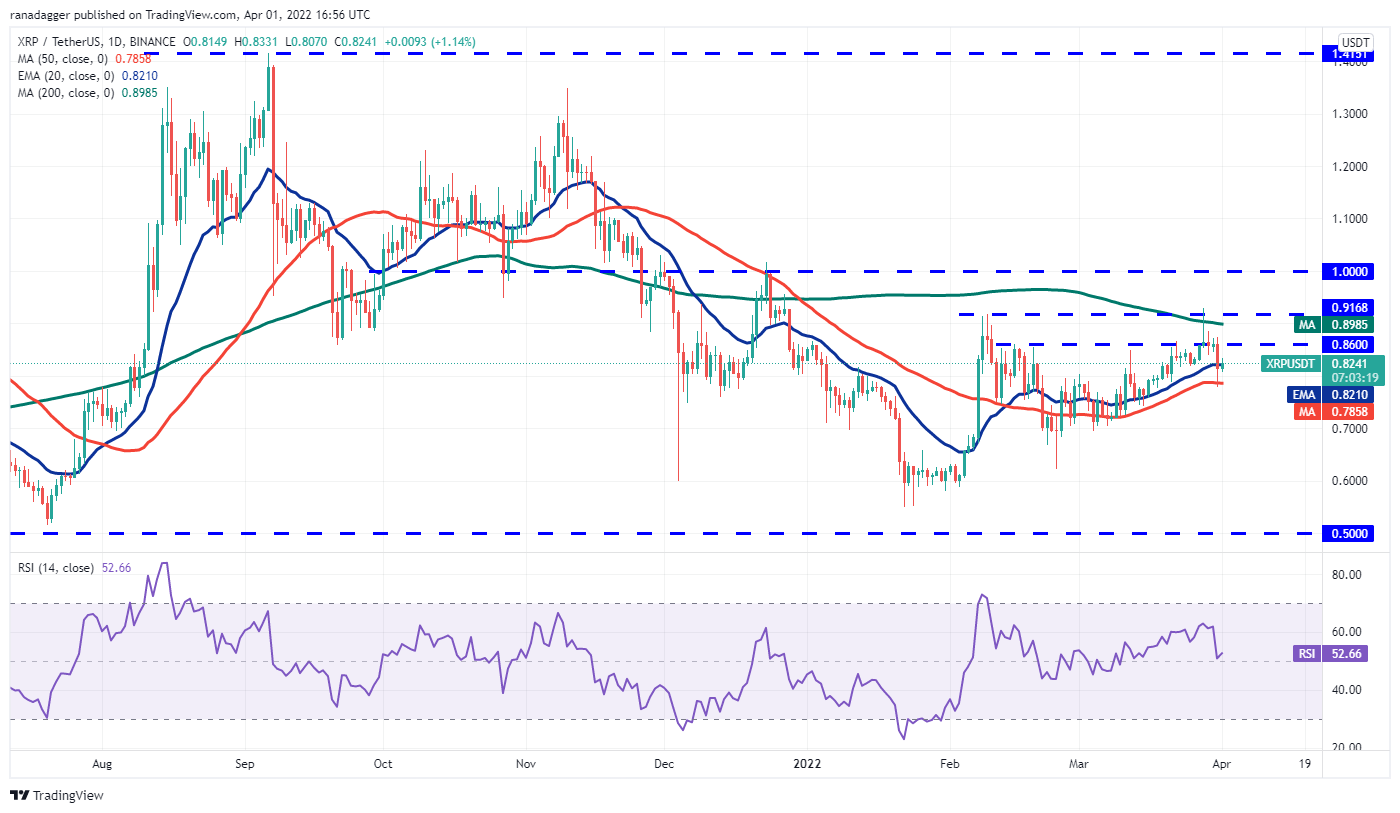 Buyers will attempt to move the pair over $0.86 and challenge the resistance at $0.91 if the price rises from its current level, contrary to this notion. If this level is broken and closed above, it might pave the way for a rally to the psychological level of $1.

Cardano (ADA) has turned down from the $1.26 overhead resistance, indicating that the bears are defending the level aggressively. The price might now drop to the 20-day exponential moving average ($1.05), which is a key indicator to monitor. 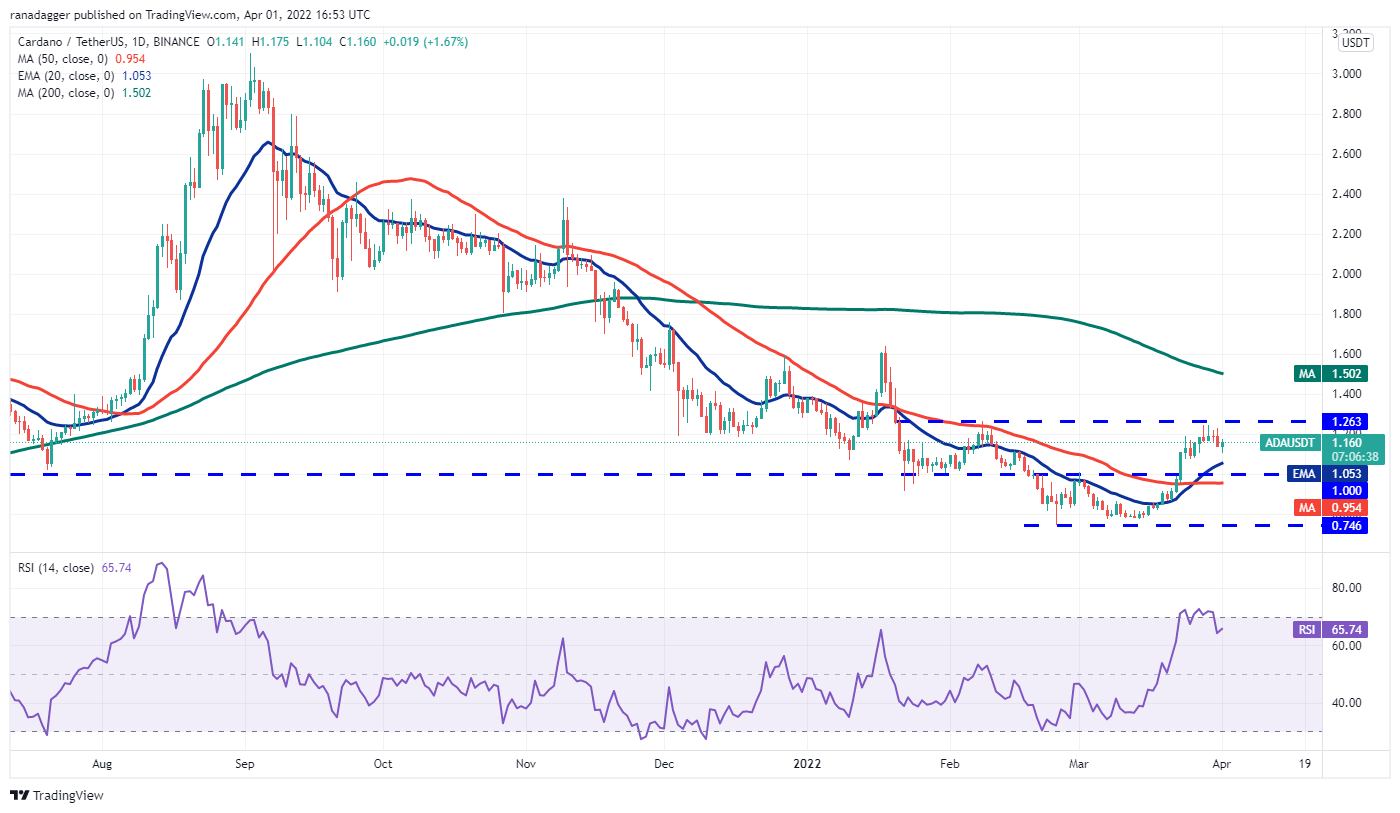 If the market bounces off the 20-day EMA, buyers will try to push the ADA/USDT pair above $1.26 once more. If they succeed, they will have created an inverse head and shoulders pattern. This pattern suggests that the duo has reached its bottom.

The pair might next rally to the overhead resistance zone between the 200-day SMA ($1.50) and $1.63, where the bears are likely to put up a strong fight. In the medium term, this bullish outlook will be shattered if the price breaks and holds below the 50-day SMA ($0.95).

After reaching a new all-time high on March 30, Terra’s LUNA token began to decline, signalling that the bears are seeking to halt the advance. A slight plus is that the bulls have prevented the price from falling below $96. This indicates that the bulls are trying to convert this level into support. 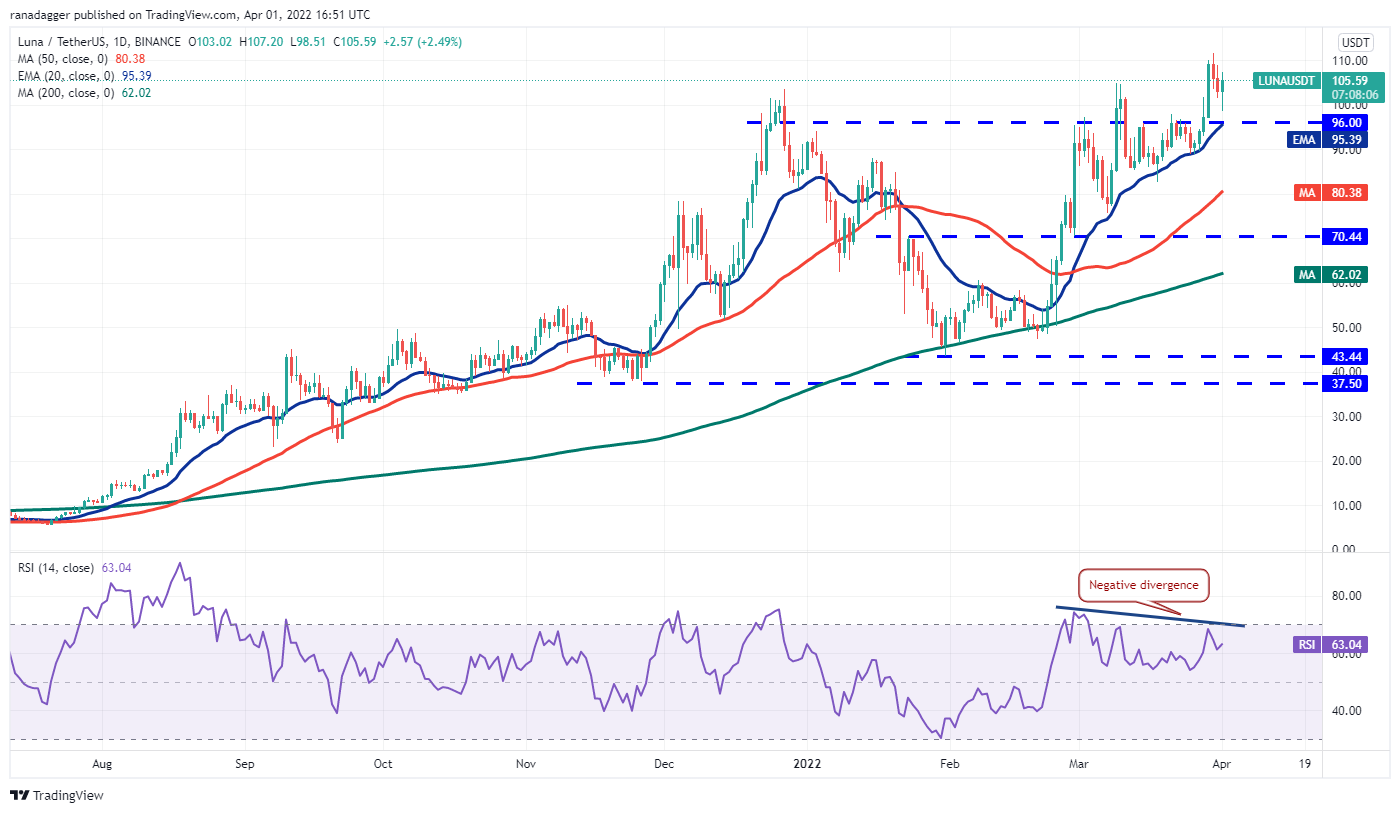 The rising 20-day EMA ($95) signals a buyer’s advantage, but the RSI’s bearish divergence says the bullish momentum may be fading. The upswing could resume if investors push the price beyond $111. After that, the LUNA/USDT pair might rise to $125.

In contrast to this belief, if the price drops below the 20-day EMA and breaks below the current level or overhead resistance, it indicates that traders are actively booking gains. After that, the pair might drop to the 50-day SMA ($80).

On March 30 and 31, Avalanche (AVAX) broke through the overhead resistance at $98 but was unable to maintain the higher levels. Short-term traders may have been enticed to record profits as a result of this. 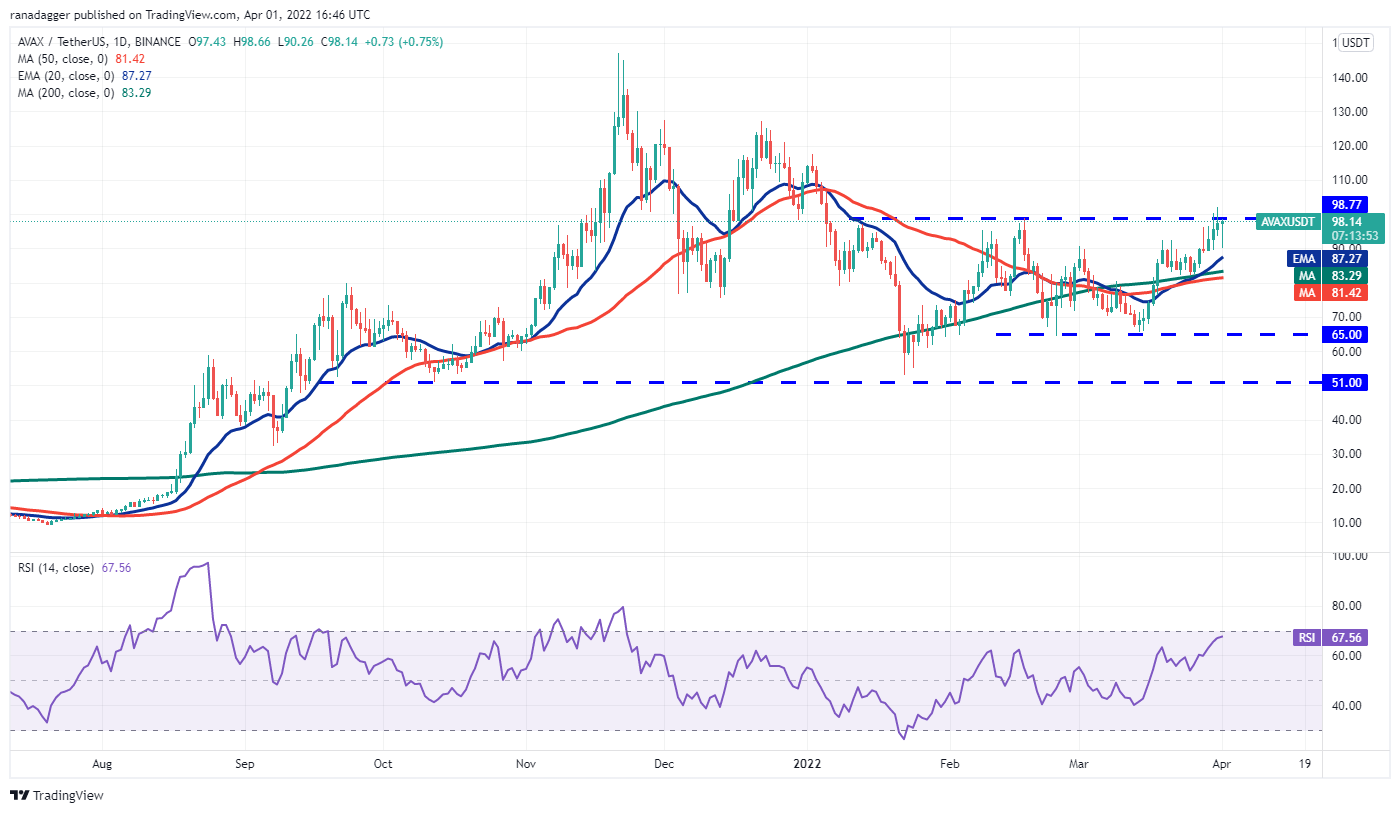 Despite the bears’ push to the 20-day EMA ($87), the lengthy tail on the day’s candlestick indicates sustained demand at lower levels. The bulls are seeking to push the market over the $98-$100 overhead zone and keep it there.

If they succeed, the AVAX/USDT pair might gain traction and rise to $120. If, on the other hand, the price falls below the overhead resistance, it will signal heavy selling at higher levels. This could cause the price to move closer to the moving averages.

The inability to break above the $23 barrier level may have prompted short-term traders in Polkadot to book profits (DOT). As a result, the price has dropped to the 20-day EMA ($20) today. 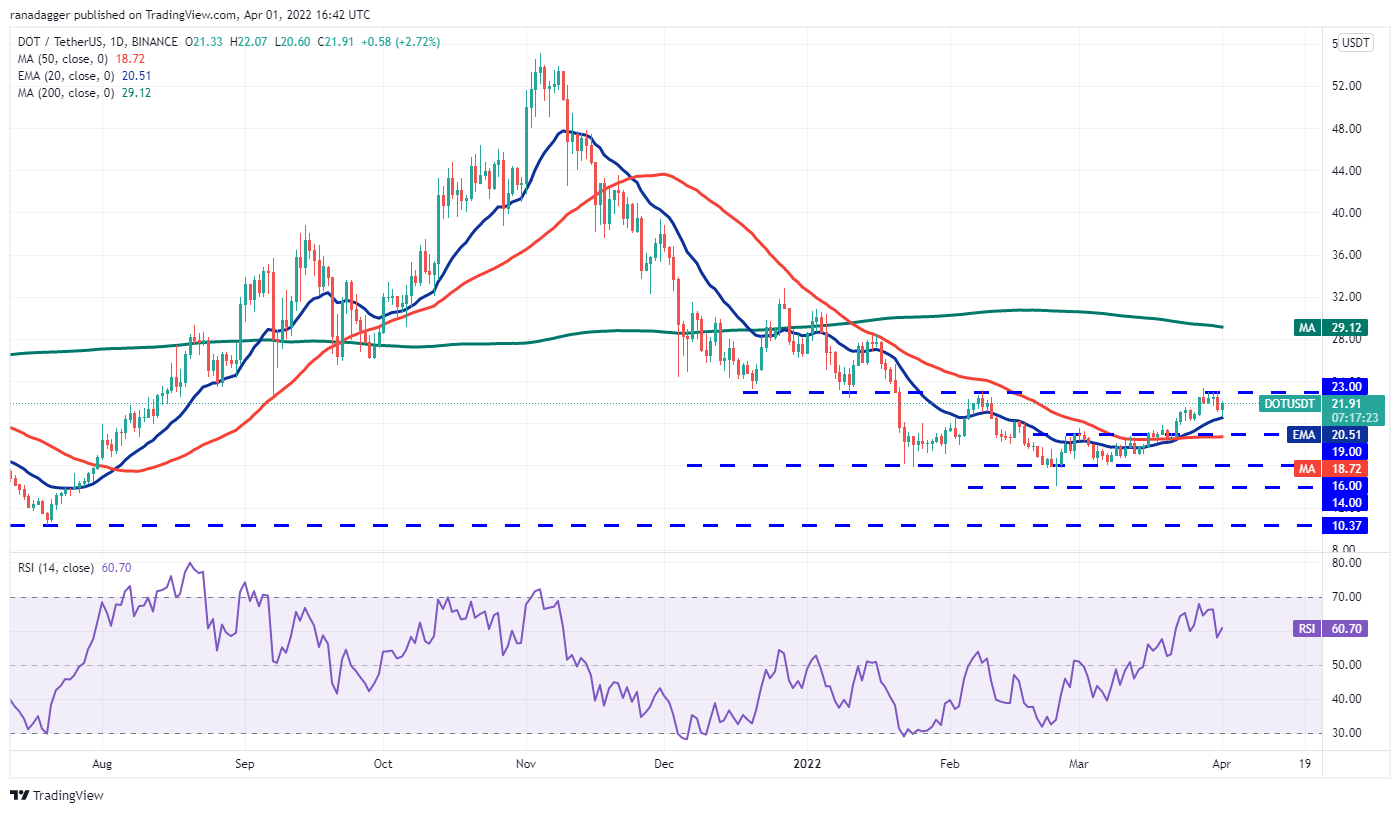 The robust recovery from the 20-day EMA implies that purchasing on dips is a good idea. At $23, the bulls will attempt to clear the overhead hurdle once more. If they are successful, the DOT/USDT pair might enter a fresh uptrend and surge to the 200-day SMA ($29).

If, on the other hand, the price falls below the 20-day EMA, it indicates that the bullish momentum has faded. This could push the price down to $19, with $16 being the next stop if this level holds.

Dogecoin (DOGE) fell to the moving averages after falling from $0.15 on March 28. If the positive sentiment is to be maintained, the purchasers must defend this critical support. 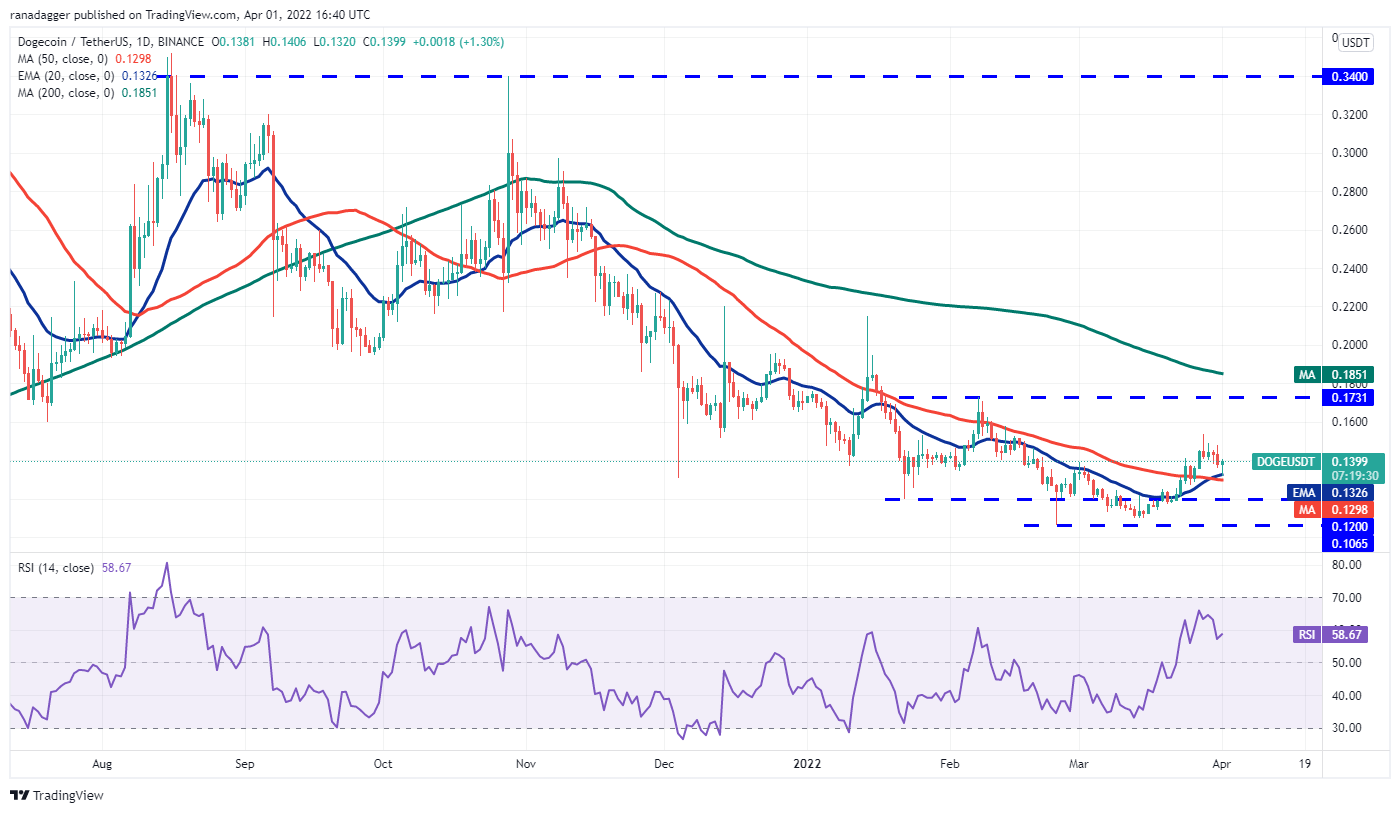 Bulls will seek to push the DOGE/USDT pair over $0.15 if price bounces strongly off the present level. If they succeed, the pair might rally to $0.17, which is the overhead resistance. The 20-day EMA ($0.13) is slightly increasing, and the RSI is in positive zone, indicating that buyers have a slight advantage.

If bears sink and keep the price below the moving averages, this bullish perspective will be invalidated in the short run. A move like this might pave the way for a collapse to the critical support zone of $0.12 to $0.10.