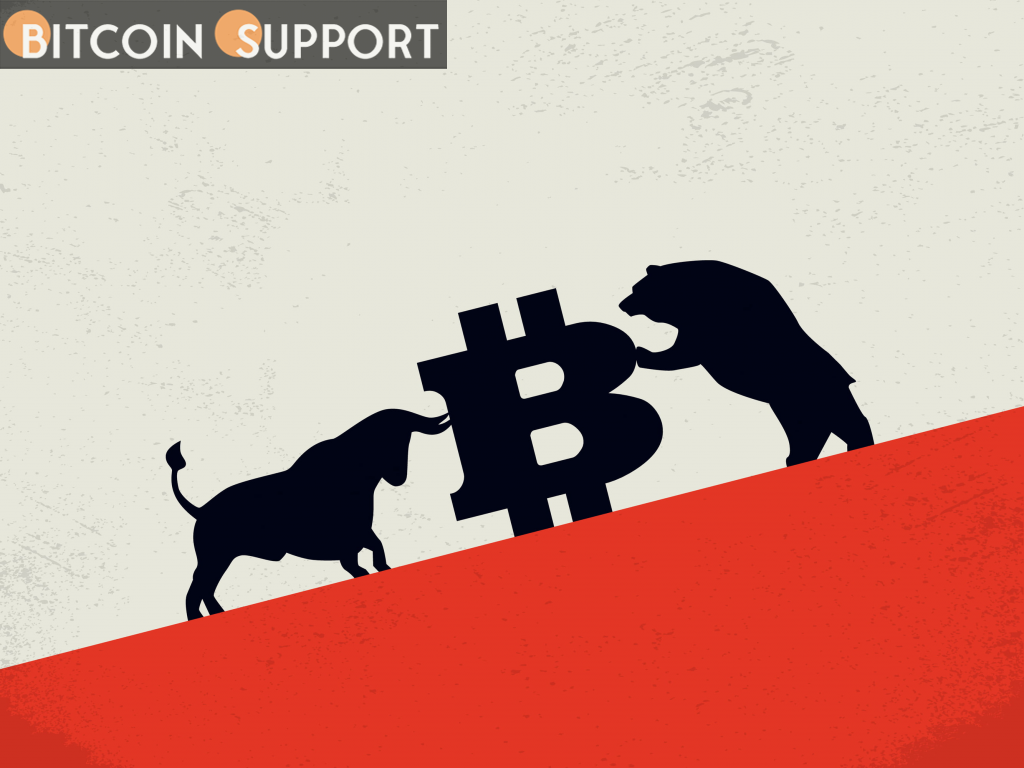 Although the market has given back last week’s gains from Bitcoin’s $45,000 high, derivatives measures imply that ordinary traders are more positive than market makers and whales.

Because every price chart pattern and analysis is visible after the movement has occurred, the term “hindsight is 20/20” is a wonderful description for financial markets.

Traders who participated in the Feb. 28 push that drove Bitcoin (BTC) above $43,000 should have anticipated some resistance. Given the market’s previous rejections around $44,500 on many occasions, calling for a retest below $40,000 seems reasonable, right? 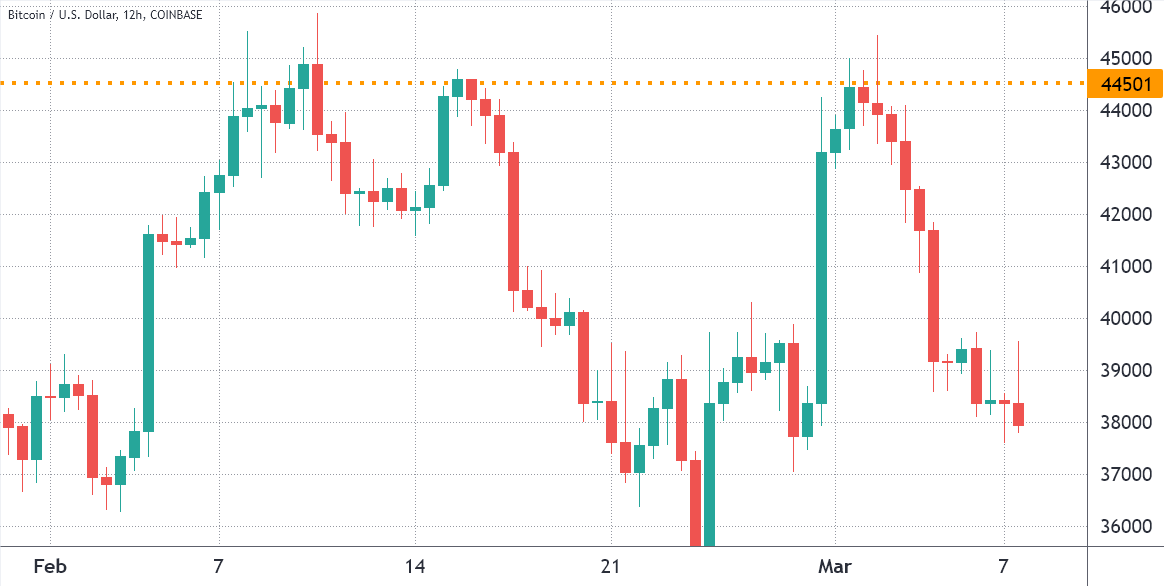 This is a common fallacy known as “post hoc,” in which one occurrence is assumed to be the cause of a subsequent event simply because it happened first. The truth is that after a large price move, analysts and pundits will always argue for continuation and rejection.

Usually after strong #Bitcoin rallies like the one we just saw today, we tend to get follow through.

As I said earlier, the sheer disbelief during this rally has me optimistic in the short-term.

Still no guarantees of new highs immediately, but at least maybe a local uptrend.

Meanwhile, according to multiple media outlets, Bitcoin “may trigger a $34K retest.” Because Russia had just announced its invasion of Ukraine, the study highlighted a “ailing momentum.”

The cryptocurrency market’s aggregate market capitalization performance over the last seven days has shown an 11.5 percent retrace to $1.76 trillion, wiping out the previous week’s gains. Large-cap assets such as Bitcoin, Ether (ETH), and Terra (LUNA) were all hit hard, losing about 12% in the period. 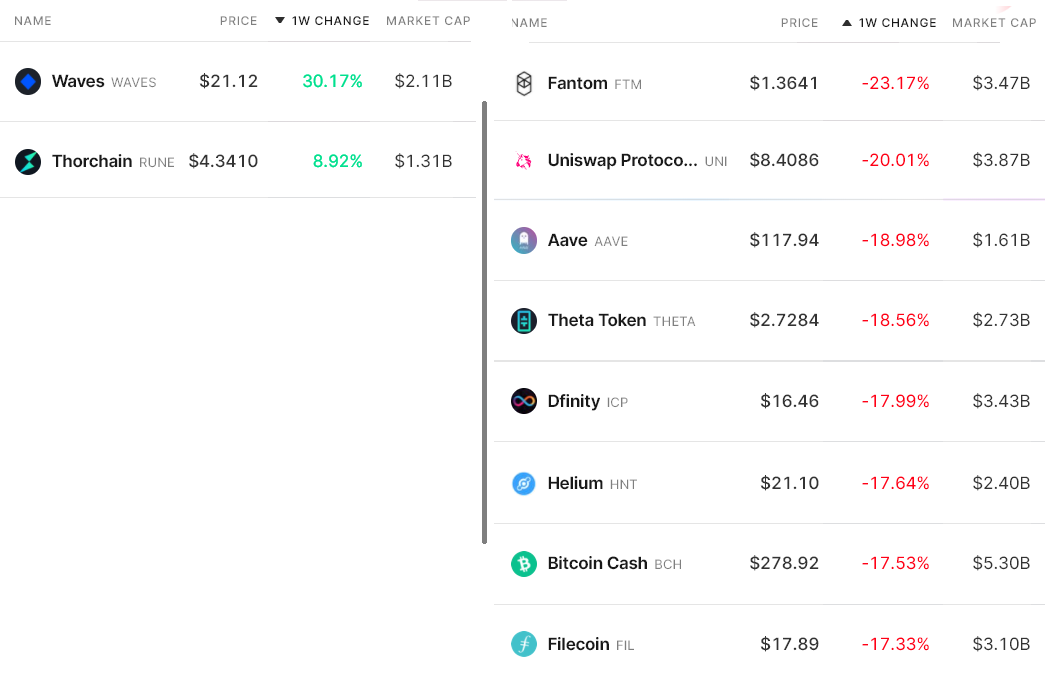 Over the past seven days, only two tokens were able to show positive results. WAVES surged for the second week in a row as the network update to make it compatible with the Ethereum Virtual Machine (EVM) progressed. The shift will begin in the spring, with the new consensus mechanism allowing for a “smoother transition to Waves 2.0.”

After completing its Terra (LUNA) ecosystem integration, THORChain (RUNE) leaped, allowing the blockchain to enable any Cosmos-based projects. Users of the ThorChain now have new trading and staking options, including the TerraUSD (UST) stablecoin.

The funding rate has shifted from negative to positive.

Inverse swaps, often known as perpetual contracts, have an imbedded rate that is normally charged every eight hours. Perpetual futures are the favored derivatives of retail traders since their prices closely match normal spot markets. 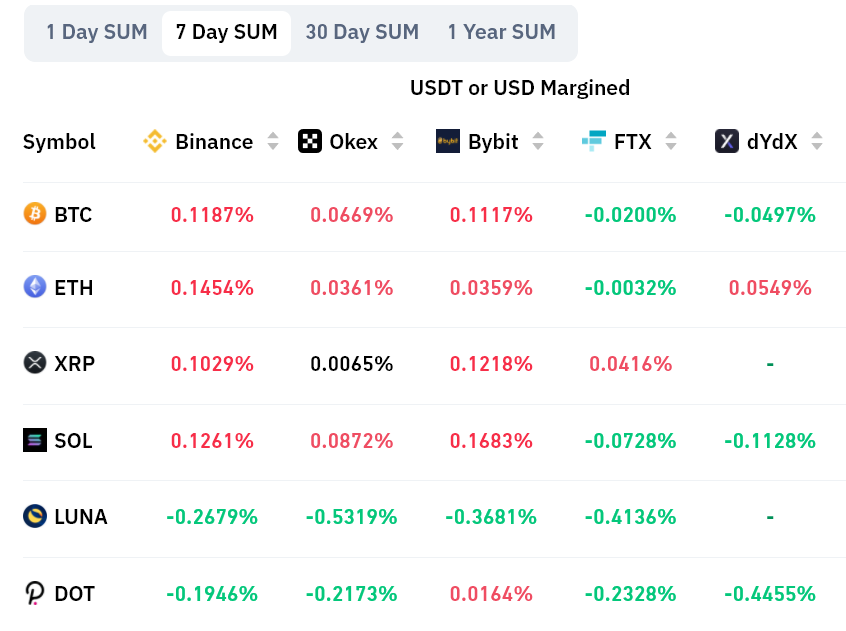 Observe how the accumulated seven-day financing rate in each of the top four coins flipped positive. This data shows a minor increase in demand from longs (buyers), but the difference is not yet significant. For example, Bitcoin’s weekly rate of positive 0.10 percent equals 0.4 percent per month, which is uninteresting for traders constructing futures positions.

When there is an imbalance created by overconfidence, the rate might easily exceed 4.6 percent each month.

Options data is factoring in the possibility of a price drop.

Although the market is now devoid of apparent direction, the 25 percent delta options skew is a warning indicator that market makers are overcharging for upside or downside protection.

The skew indicator will rise above 10% if professional traders fear a Bitcoin price crash. Generalized excitement, on the other hand, has a negative ten percent skew.

The skew indicator remained at 10% until March 4, then dropped to 7% or 8% during the week, as shown above. Despite this, the signal indicates that professional traders are pricing in a greater likelihood of a market meltdown.

Retail traders’ futures data reveals a shift away from a slightly negative sentiment versus options market makers pricing in a bigger probability of a subsequent drop, resulting in mixed views.

Some may argue that Bitcoin’s third failure to break through the $44,500 resistance was the final nail in the coffin because it lacked strength during a period of global macroeconomic turmoil and strong commodity demand.

On the other hand, the crypto sector’s current market capitalization of $1.76 trillion can hardly be considered a failure, so there’s still optimism for investors.