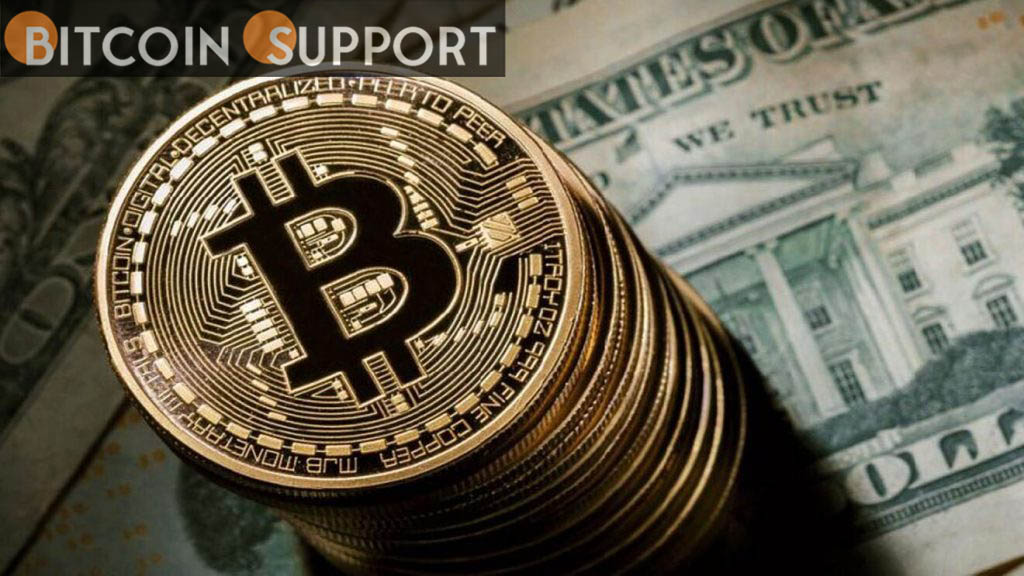 Direct investment in Bitcoin has proven to be a better choice than holding Coinbase stock since its initial public offering.

Purchasing a Coinbase stock (COIN) in order to acquire indirect exposure to the Bitcoin (BTC) market has historically been a poor strategy when compared to holding BTC directly.

Notably, COIN is down nearly 50% to nearly $186 when assessed against the starting rate for its April 14, 2021 initial public offering. By comparison, Bitcoin outperformed the Coinbase stock throughout the same period, losing slightly more than 30% as it fell from about $65,000 to around $41,700. 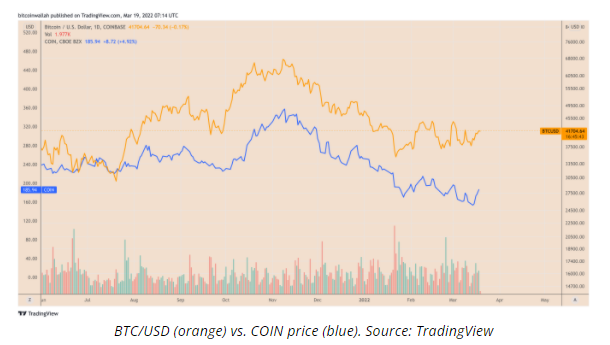 What is Coinbase concerned about?

However, the connection between Coinbase and Bitcoin has mostly been favorable, indicating that many investors view them as assets with comparable value propositions. This is mostly owing to the enthusiasm surrounding COIN’s potential to simplify the crypto sector’s onboarding process for investors compared to purchasing Bitcoin, Ether (ETH), and other digital assets. 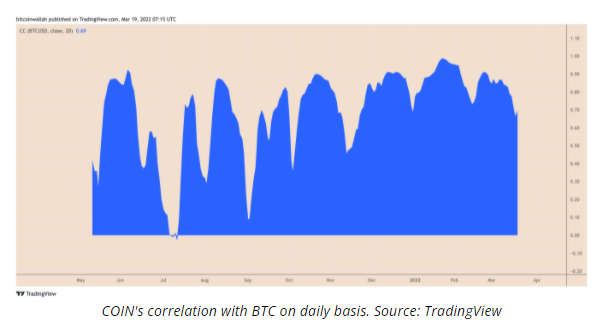 However, the COIN product is seeing increased competition from crypto-based exchange-traded products (ETPs), mining stocks, and other crypto-enabled enterprises that are now included in major Wall Street indexes. This may have lowered its demand as the go-to asset for acquiring exposure to the cryptocurrency market.

Additionally, COIN bears downside risks as a result of its depressing FY22 estimates. Coinbase indicated in its most recent earnings report that cryptocurrency volatility might turn 2022 into an unprofitable year, saying that their adjusted EBITDA losses could reach roughly $500 million if its monthly transaction users fall within the projection range. 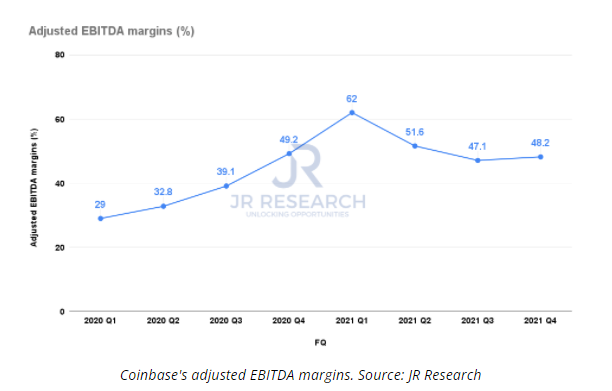 Jere Ong, lead analyst and founder of JR Research, stated that 96 percent of Coinbase’s total revenue in Q4/2021 came from fees charged on retail transactions, highlighting the “inherent fragility” of the company’s business model. The following are excerpts from his report:

“We believe it offers a short-term buying opportunity for speculative investors. But, we do not encourage investors to hold COIN stock for the long term unless you have a very high conviction of its execution.

Bitcoin’s hazards are rather distinct

Bitcoin is a unique beast when contrasted to centralized business stocks such as Coinbase.

Absolute scarcity, a censorship-resistant decentralized ledger, and gold-like qualities as a potential hedge against inflation in the digital age are just a few of the thoughts propelling the Bitcoin price upward today.

With 7.5% inflation and real inflation numbers at 19.5% (shadowstats) the fed is doing a great job! Just 100x more, and they will be at Paul Volcker's level of 30% interest rates!!! Got #Bitcoin? pic.twitter.com/qesZ2iU0Mv

As a result, researchers and strategists estimate that Bitcoin will eventually achieve a value of between zero to “millions,” depending on who you ask.

Elsewhere, the majority of stocks with a crypto exposure have also fallen more than Bitcoin. Specifically, Nasdaq-listed mining companies Canaan, whose stock price plunged nearly 80% year over year, and Riot Blockchain, whose stock price decreased 67.55 percent within the same period.