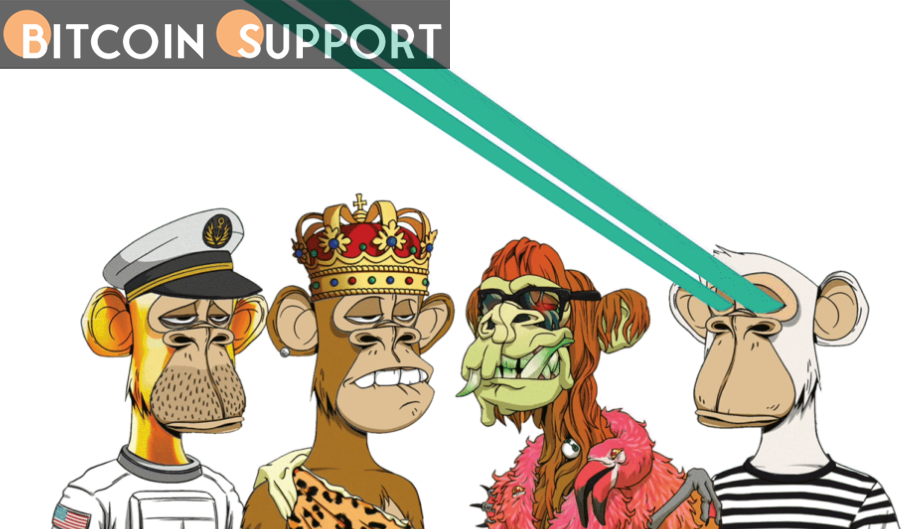 ApeCoin, an NFT token created by the “Bored Ape Yacht Club,” was a big hit. This led to the creation of a whole world of NFTs powered by ApeCoin.

In the wake of the success of the “Bored Ape Yacht Club” (BAYC) NFT collection, the ApeCoin token, which is used in the ApeCoin ecosystem, has seen a lot of growth in the last few weeks.

To understand the ApeCoin-powered world that is coming to life, we need to look back at “Bored Ape Yacht Club” and how the Ethereum-based NFT collection became a huge hit.

The Dawn of the Apes

Yuga Labs, a Web3 marketing company, came up with the idea for BAYC. They came up with an exclusive NFT collection made up of 10,000 Bored Ape digital collectibles that were made programmatically.

As a result of the 170 traits, there were so many ways to make Bored Ape avatars that were very different.

A pre-sale of 10,000 digitally verifiable Bored Ape NFT avatars sold for 0.08 Ether (ETH) each, which was worth about $190 at the time. The “Bored Ape Yacht Club” went live to the public in April 2021. For new players, they’ll have to buy Bored Apes from NFT platforms, like OpenSea, to get them. All 10,000 NFTs were sold in a week.

People who join the BAYC ecosystem get NFTs, which also act as membership cards and give them access to membership-only benefits, which we’ll talk about more below. Needless to say, it’s been a big hit. People from Hollywood to the NBA are shelling out big money to own a BAYC NFT.

People like Justin Bieber, Paris Hilton, Snoop Dogg, and Post Malone became Bored Ape avatars, so the prices of NFTs rose. A Bored Ape on OpenSea costs about 85 Wrapped Ether (wETH), which is about $250,000. When Sotheby’s sold a collection of BAYC NFTs for $24.39 million last year, the auction house was known for its high prices.

after BAYC sold all 10,000 NFTs, Yuga Labs came up with the “Mutant Ape Yacht Club” (MAYC) and the “Bored Ape Kennel Club.”

The owners of BAYC NFTs were given “Mutant Serums,” which allowed them to turn their Bored Apes into Mutant Apes NFTs. This allowed 20,000 Mutant Apes to be made in the process. Those who own the Bored Ape Chemistry Club can also sell their serums there, which is the official place to buy and sell mutation-inducing NFT serums, as well.

Also, Yuga Labs gave people who own BAYC and MAYC a week in June 2021 to get a unique Shiba Inu-themed dog NFT. Each Kennel Club NFT was made up of 170 different things. They were able to sell their Kennel Club NFTs on OpenSea, and 2.5% of each sale went to real-life animal shelters.

During the early stages of the BAYC’s growth, Yuga Labs focused on making an autonomous organization (DAO) that would serve as the backbone of the community.

The Ape Foundation is the foundation for the ApeCoin DAO, which is in charge of running the ecosystem and managing projects on a day-to-day basis. Ape Foundation expenses are paid for by an ecosystem fund that is set up by the DAO. It also serves as a way for ApeCoin holders to be a part of the governance process.

ApeCoin (APE) is an ERC-20 token that is used to run the Ape ecosystem and make transactions. Those who own ApeCoin can participate in the ApeCoin DAO. They can also trade with other participants and get access to special ecosystem services, games, and items that are only available to holders.

In order to keep the supply of ApeCoin at 1 billion tokens, Yuga Labs set a cap on how many tokens could be made at once. Over the next 48 months, the tokens will be released in stages. At the start of the project, 150 million tokens were given to BAYC and MAYC holders. A total of 470 million tokens will be given to the DAO’s treasury and general resources for the ecosystem. This is how it works: The first 117.5 million APE were unlocked. Every month for the next four years, 7,343,750 APE will be unlocked.

For three years, Yuga Labs will get 150 million tokens, which have a 12-month lock-up. Each month, 4.1 million tokens will be unlocked for the next three years. Some of their total assets will also go to the Jane Goodall Legacy Foundation. This foundation was started by the famous primatologist and conservationist Jane Goodall, who died in 2013.

Those who contributed money to the project were given another 140 million tokens, while the four Yuga Labs and BAYC founders will each get 80 million tokens. These have a 12-month lock-up. After that, 2.2 million ApeCoin will be unlocked each month for 36 months until they are all used up.

The ApeCoin token airdrop took place on April 17. Different amounts were given to BAYC and MAYC holders, as well as Kennel Club members, who also got a bonus amount of money.

At its launch, APE was worth $39.40 per token. During its first day of trading, the price fell to $6 per token, which was the price at which it was worth. This is how the price of ApeCoin looked the day after it was released: It went up to $17.75. Over the next few days, the price went down a little bit. Toward the end of March, ApeCoin has been on a steady rise. It has been hovering between $13 and $14. 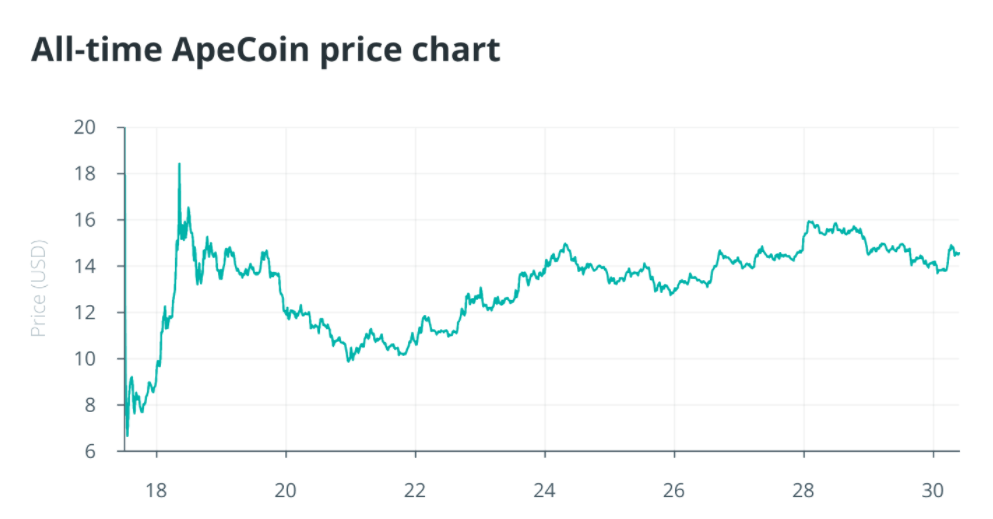 Early days for ApeCoin, but the success of BAYC has led to a surge in interest in APE tokens after the launch. As soon as APE came out five days later, Yuga Labs announced that it had raised $450 million in new money, which made the company worth $4 billion.

Andreessen Horowitz, which led the fundraising round, is one of the biggest venture capital firms out there. It shows that they have seen the company’s success and that there is a lot of room for growth.

Yuga Labs also bought the rights to the “CryptoPunks” and “Meebits” NFT collections from Larva Labs in March as the company looks to expand its ecosystem and make its projects work together.

People will be interested in ApeCoin and other NFT projects from Yuga Labs through 2022 because of all of these factors, like the Bored Ape ecosystem.