Panelists debate whether DAOs have sufficient legal authority to not just replace corporate structures but also to challenge governance approaches.

On Monday, Kimbal Musk, Nadya Tolokonnikova, and Alex Zhang spoke at the SXSW panel “Move Over NFTs. Here Come the DAOs” in Austin’s Convention Center. Tolokonnikova is a co-founder of UnicornDAO and UkraineDAO, as well as a former member of the Russian protest punk music band Pussy Riot. Zhang is the mayor of the social club DAO Friends With Benefits, whereas Musk is the cofounder of the philanthropic DAO Big Green DAO. Michael Casey, a journalist, served as the moderator.

The panellists described their own decentralised autonomous organisations, or DAOs, and came to the conclusion that ownership, transparency, and localisation are the most important elements of a successful DAO during the conversation. 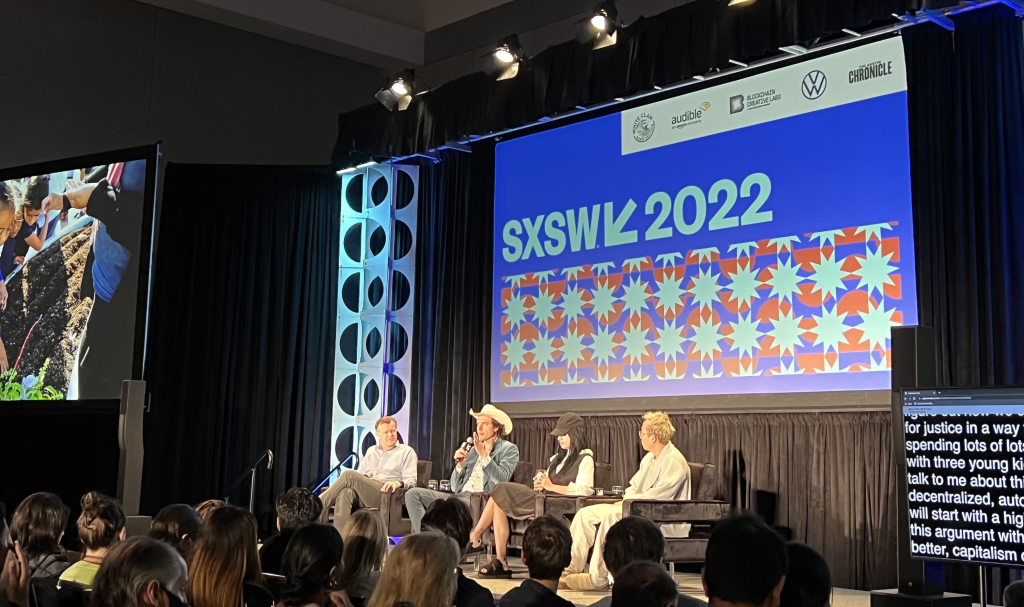 Tolokonnikova, a self-described anarchist, said she joined Web3 to “find better instruments for activism” and discovered that DAOs may provide a “better governance model than a national government.” UkraineDAO, she added, was more than a $7 million fundraising effort that rallied supporters behind the image of the Ukrainian flag, and is a “huge leap for crypto” that even Ethereum’s founder Vitalik Buterin backed.

UkraineDAO also debunked the myth that NFTs are “simply cartoon graphics” by demonstrating how they may solve local issues. It was able to “distribute money really quickly” in this case, which was used to provide medical assistance to those affected by the Russia-Ukraine conflict.

Zhang’s Friends With Benefits, or FWB DAO, on the other hand, began as “an internet accident” in 2020 and has since developed into a community of people who are “socially and financially aligned.” FWB is made up of 6,000 token holders, including some celebrities and public personalities, who collaborate to produce Web3 products like the recently announced FWB.Archive application for archiving digital events.

Musk added his two cents to the discussion, describing a DAO as a community that “isn’t governed by America or by any government in the world” and allows its members to own the value of the organisation’s outcome. Big Green DAO, he said, “truly wants to experiment with the governance system” of NGOs by “providing community authority” over its treasury and grant-making process.

Tolokonnikova went on to say that bureaucracy is a major issue in nongovernmental organisations (NGOs) because the treasury and fund distribution are not transparent. DAOs might potentially offer a better governance model than nation states around the world, she said, because they minimise bureaucracy and promote openness. “A chocolate bar may move from one nation to another without complications, but I can’t,” said the UkraineDAO co-founder, who was imprisoned in Russia for two years for hooliganism.

The concept of legal protection was then considered by Musk. He questioned if Web3 enterprises functioning as DAOs have the ability to go against centralised state legal systems, given that Big Green DAO is concerned with the liabilities of charitable organisations.

“Laws are catching up,” Zhang says, adding that “a lot of wonderful DAO technology is being built that wants to operate in the real world,” which is vital for a DAO like FWB that offers physical activities. When pressed to explain on his point of view, he stated that he believes DAOs will eventually replace LLCs and C Corporations, and that “no one even says DAO anymore,” instead referring to the organisation. Zhang also revealed that FWB is working on automating payroll and issuing W-2 tax forms to its members, who can choose the currency in which they want to be paid.