Analyze the cryptocurrency market’s response to the Russia–Ukraine situation 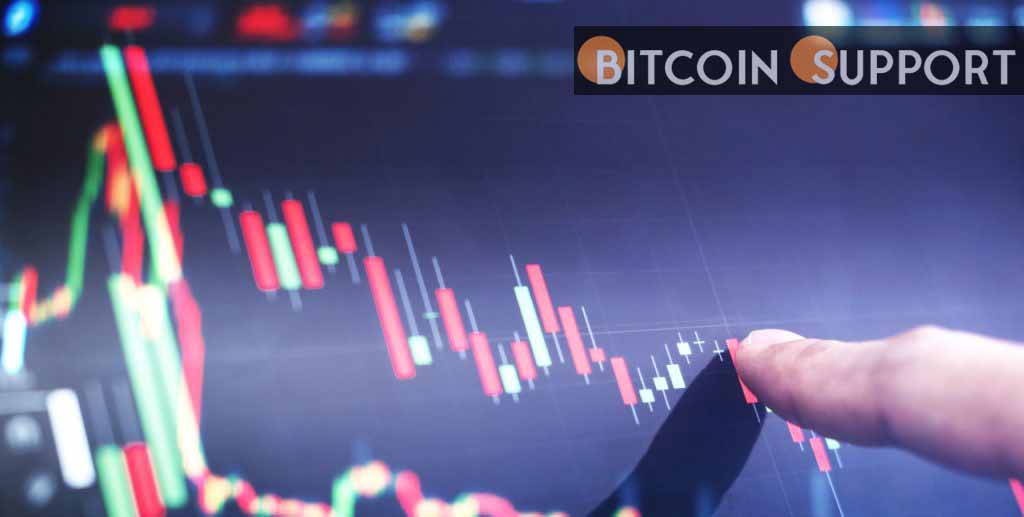 February witnessed a dramatic change away from inflation and news from the United States Federal Reserve, followed by news of a conflict in Eastern Europe that completely eclipsed prior concerns about economic health. What is happening in Ukraine has resulted in an instantaneous market-wide price decline. Bitcoin (BTC) fell by 11% over a 16-hour period, while the bulk of altcoins fell by 20% or more.

The battle was initially expected to have a negative effect on cryptocurrency prices, which it did for a brief period. However, when concern spread, prices rapidly increased.

However, the small sample size of days thus far indicates that the crisis may have a beneficial influence on BTC and altcoins, similar to what occurred in March 2020 with the public COVID consciousness.

Sentiment is frequently a good indicator of what the trading crowd anticipates will happen next. Over the last month, audience sentiment has been an extraordinarily powerful leading indicator. 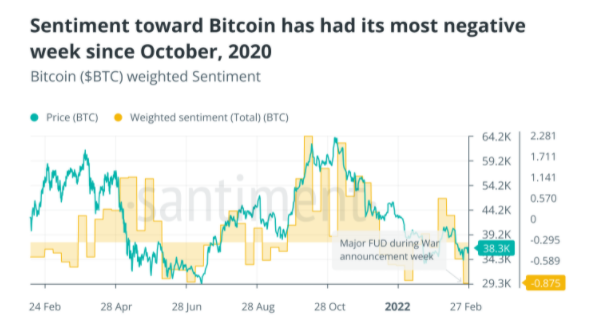 In early February, on the heels of Fed and inflation conversations, cryptocurrency values soared, reaching a high of $45,000 for Bitcoin by the middle of the month before a dramatic reversal. FUD was the dominant theme when the conflict began in late February, but attitude brightened as prices swiftly recovered, prompting many to assume that the price decline was really a “dead cat bounce.”

Now, traders have completely reverted to a slight positive attitude toward Bitcoin. It’s critical to note that cryptocurrencies may be particularly volatile at the moment, as they cling to the quick evolution of the European crisis.

30-day price returns all over the map

The case for being a Bitcoin maximalist has been amply demonstrated throughout the course of the last month’s volatility. Yes, numerous projects, like Terra (LUNA), XRP, and Shiba Inu (SHIB), outperformed BTC in terms of % market cap rise.

However, Bitcoin’s ability to avoid very volatile declines in comparison to practically all other cryptocurrencies, as well as to actually lead the rebound drive for portions of the last month, is what kept Bitcoin holders afloat.

Stablecoins, like as Tether (USDT), have increasingly become a good bellwether in this regard, owing to the way large addresses accumulate or sell their holdings. 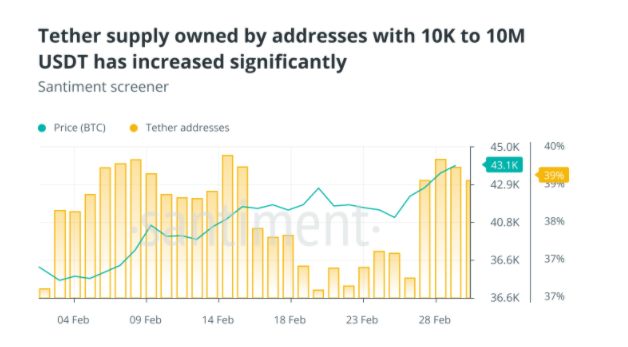 The fraction of USDT supply held by addresses with 10,000–1 million USDT has been steadily increasing, reaching over $1 billion in February. Typically, the amount is limited to one million because exceeding this level results in the discovery of several exchange addresses that are unaccounted for. Regardless, based on what has been observed, sharks and whales have considerably more USDT available for cryptocurrency purchases than they had a month ago.

Bitcoin whales look to be in a state of modest decline/holding.

Following a one-month low in supply held on the day of the war news, Bitcoin whales have accumulated only marginally and have maintained their cumulative holdings at the same level. After falling to a one-month low in supplies held on the day of the war announcement, they accumulated marginally and have been flat in terms of cumulative holdings thereafter. Nonetheless, stablecoin whales with wallet holdings of 10,000–10 million USDT purchased over $1 billion in USDT in February, suggesting a 7% gain in purchasing power in just one month. 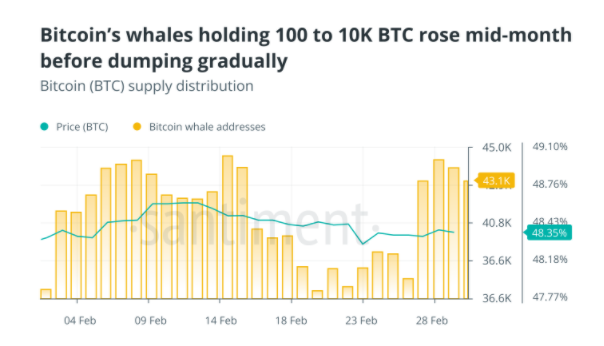 Any indication that this group of addresses is accumulating would be a strong indication that FUD is dispersing among the critical group of stakeholders who have the ability to launch or stop a bull run at a moment’s notice.

The Santiment Network Value to Transactions Ratio (NVT) model determines the total number of unique Bitcoins circulating on the network and then determines whether that output is greater than, equal to, or less than the expected amount of circulation necessary to justify Bitcoin’s current market capitalization.

At the moment, the number of unique Bitcoins flowing on its particular network appears to be quite promising. Since October 2021, this model has flashed a semi-bullish signal, indicating that the amount of utility Bitcoin is gaining justifies a little greater market valuation than it now holds. March has only just begun, but it is off to a strong start with a bullish signal based on a relatively tiny sample size of recorded days.

Bitcoin continues to migrate away from exchanges.

The total supply of bitcoin held on exchanges has continued its decreasing trend, hitting 10.76 percent. This is the lowest supply-to-demand ratio for Bitcoin on exchanges since November 2018. By and large, this continuing downturn signals a reduced likelihood of future sell-offs. 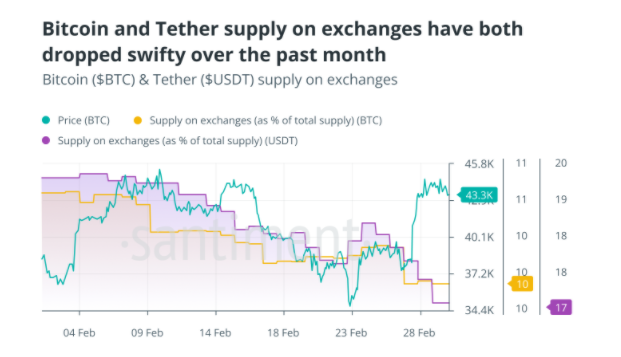 Meanwhile, Tether’s supply on exchanges is dwindling, which is less promising. Increased USDT on exchanges typically indicates future cryptocurrency purchases, while it can occasionally be for the purpose of converting to fiat and cashing out. However, for the time being, attention should be paid to an increase in this statistic, particularly when it matches the USDT accumulation of significant addresses.

Profit/loss realized by the network

Another intriguing development is the fact that the Bitcoin network has earned a profit/loss. When word of the war came and prices fell, this indicator fell to its lowest point since late January. Typically, these strong negative spikes indicate the formation of market bottoms. This is because the network is currently trading at a loss and requires a price increase to neutralize and rebalance. 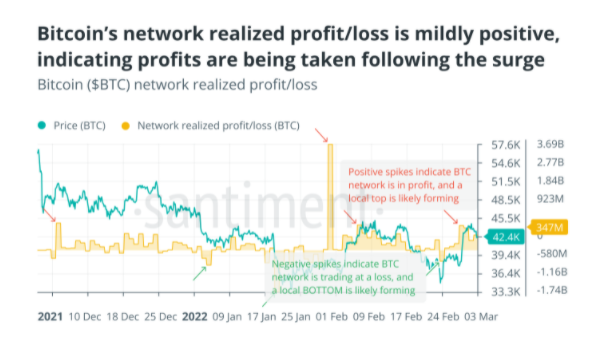 Following the initial FUD on the first day, BTC’s network profit/loss quickly flipped to the most favorable level since late January. After nearly scraping $45,000, the network traded at a profit, a local top formed, and prices have since moderated slightly.