Bitcoin & Crypto Donations Soar in Ukraine Amid Conflict With Russia

The use of cryptoassets by Ukrainian hacker groups and traditional opposition movements to fund their activities and circumvent standard financial service providers is on the rise.

Elliptic, a blockchain analytics business, revealed in its recent research that donations to organisations participating in the war with Russia have totaled hundreds of thousands of dollars, with donations jumping by more than 900 percent in 2021. 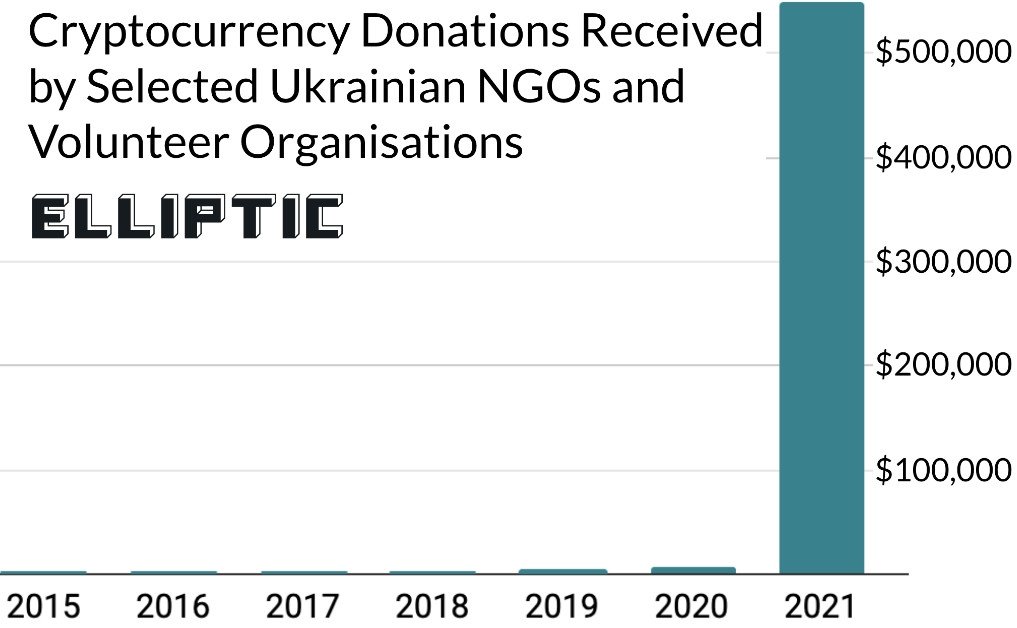 The Ukrainian Cyber Alliance, a hacking collective that targets Russian targets, is one of the organisations that has turned to bitcoin (BTC) and other cryptoassets as a means of earning funds. According to Elliptic data, the group has received close to USD 100,000 over the past year in BTC, litecoin (LTC), ethereum (ETH), and several stablecoins.

More than USD 268,000 has been donated in Bitcoin to the Myrotvorets Center, another Ukrainian non-profit with ties to the government, according to reports. According to the researchers, the organisation made the switch to bitcoin in 2016 after its PayPal account was closed and the funds kept in it were confiscated by PayPal.

“Pro-Russian terrorists, separatists, mercenaries, war criminals, and murders,” according to Elliptic, can be found on Myrotvorets. A Ukrainian writer and a member of parliament were assassinated in 2015 because of material published on Elliptic’s website.

To add to the significance of Ukrainian groups turning to crypto, they pointed out that the approach was previously employed by some Russian organisations.

Pro-Russian separatists in eastern Ukraine, for example, can now donate using cryptocurrency through a number of online fundraising efforts that have been running since 2014. At least 68 Bitcoin donations were made to the “Save the Donbass” campaign between 2014 and 2016, according to Elliptic.

FSB agent Igor Vsevolodovich Girkin, a Russian war hero who served in Ukraine in 2014, accepts donations in BTC as well as through numerous fiat-based money transfer systems, as another example given in the article.

As part of the Dutch investigation into the downing of Malaysian Airlines Flight 17 in July 2014, Dutch officials have charged Girkin.

Elliptic dubbed cryptocurrencies “a strong, developing weapon for the crowdfunding of conflict” based on their findings. While it recognised that crypto payments make up only a small percentage of the total, it said they had become “a robust and more popular alternative” to traditional bank-based donations.

“Cryptocurrency is also particularly suited to cross-border donations, allowing easier access to wealthy overseas donors,” the researchers said, noting that financial institutions have no ability to close crypto wallets like they can with fiat-based systems.

Some of the groups that raised money in Ukraine were closely linked to the government, according to Elliptic, and this trend of nation states using crypto to generate money outside the traditional system can be seen as part of this.

In addition to Iran and North Korea, a number of other countries have reaped the benefits of this, including Russia, China, and the United States.